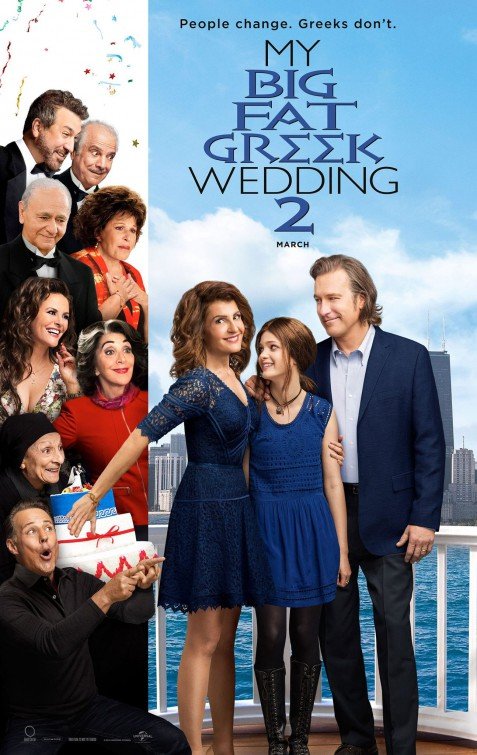 MY BIG FAT GREEK WEDDING 2 comes 14 years after the first movie grossed over $350 million dollars worldwide. In this movie, Toula and Ian have been married for quite some time, and have a 17-year-old daughter, Paris, who’s ready to apply to colleges. As usual, Toula’s big Greek family is as overwhelming, which makes Paris want to apply to colleges far away. Toula and Ian are drifting apart, because Toula’s elderly parents, Maria and Gus, always need her attention. When Gus and Maria discover their priest never signed their marriage certificate 50 years ago, a wedding is afoot for Toula’s parents.

MY BIG FAT GREEK WEDDING 2 has its sweet moments, but the messy storytelling, unsatisfying jokes and brief politically correct moments leave something to be desired. There are positive Christian, moral themes and content celebrating marriage, a church wedding, family bonds, and fighting for those you love. There’s very little foul language, and the immoral sexual content is much less. However, MY BIG FAT GREEK WEDDING 2 has some sexual references and jokes that warrant caution for older children.

(CC, BB, PC, Ho, L, S, N, AA, DD, M) Strong Christian, biblical, moral worldview celebrating family, forgiveness, marriage and commitment, a Greek Orthodox wedding ceremony, and references to attending church and “living in sin,” plus a brief politically correct subplot of one cousin being secretly homosexual; three light profanities; no violence; many sexual references, mostly in the context of marriage, references to male and female private parts, kissing and implied sex in a car between married couple, son tells his father not to click on an ad on the computer because it’s pornography, and they chuckle, teenagers kiss at a prom, and brief, light references to being secretly homosexual; some cleavage bearing dresses, one provocative relative unzips her dress to show more cleavage while flirting with a married man; drinking with some drunkenness; no smoking. but there’s a joke about selling pot; and, teenager talks back to her parents and daughter lies to her parents about them being direct descendants of Alexander the Great.

In this movie, Toula and Ian have been married for quite some time, and have a 17-year-old daughter, Paris, who’s getting ready to apply to colleges. As expected, Toula’s Greek family is as overwhelming as ever, which makes Paris want to apply to colleges far away, just so she can have some breathing room. Toula and Ian are also drifting apart, since Toula’s parents, Maria and Gus, always need her attention. This puts Toula at their beck and call.

When Gus finds his old marriage certificate, he finds out their Greek priest never signed the certificate, rendering them unmarried. Gus tries to get a priest to sign it to make it official, but Maria refuses to marry her husband again unless he does it right. A fight ensues, and Toula is left to fix everything again. Meanwhile, Ian feels neglected, and Paris is thinking about choosing New York University as her college.

Eventually, the wedding planning for Maria and Gus begins, and Toula tries to refocus some attention on her immediate family.

MY BIG FAT GREEK WEDDING 2 has its sweet moments, but overall, the messy storytelling and multiple endings leave a bit to be desired. The first movie charmed American audiences with its flavorful jokes, but sadly, this sequel, like most sequels, feels like 14-year-old leftovers. It’s a bit cleaner than the first movie, but a completely unnecessary, gratuitous subplot involving one of the cousins being secretly homosexual is a cheap attempt at modernizing the traditional Greek orthodox family.

That said, there are still some positive Christian, moral themes in MY BIG FAT GREEK WEDDING 2. Even though the main plot is that an elderly husband and wife aren’t actually married according to the certificate, and Maria begins to wonder if she made a mistake getting married, marriage is celebrated in the end, when she realizes her big, loud family is all the adventure she ever needed. Also, Toula and Ian learn to let their daughter go and begin to reignite the spark of love and romance that they once had for each other. The final wedding ceremony in the Greek Orthodox church is sweet, and even tear jerking.

While there’s very little foul language, and the immoral sexual content is much less than the first movie, there are still some sexual references and jokes that warrant caution for older children.