"A Fare To Forget" 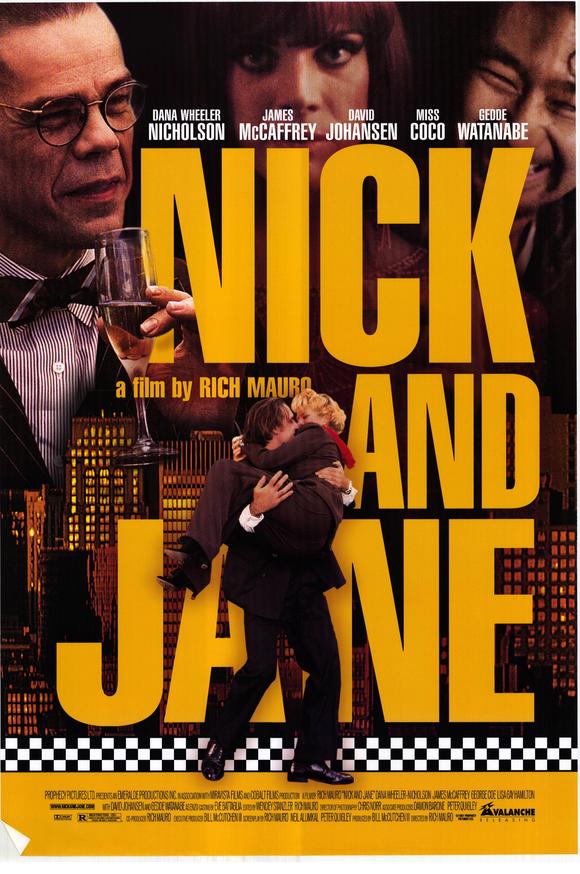 NICK AND JANE is another trite romance. Jane is a corporate executive who turns down dates because she has to work at home. When she discovers her co-worker boyfriend in bed with another woman, Jane rushes into a cab in tears and meets Nick, the rakish, off-beat but multi-talented cab driver. Not only are they mutually attracted to one another, but Jane finds a use for Nick. She sets Nick up as a high-profile corporate type to make her old beau jealous. Nick goes along with her deception and falls for Jane. Regrettably, despite his efforts to please Jane, Nick finds Jane in the arms of her old beau at a company brunch.

This story is based on the first-time director/writer’s own personal experiences. While his own love life might have blossomed richly, his film is lackluster and predictable. The only endearing aspect of this film is the performances of the two unknown leads who are both sweet and charming, but they are limited by a witless and uninspiring script and amateurish directing. This totally contrived effort is also filled with sexual promiscuity. Jane flits from one beau to another, and a man impersonates a woman.

The tired old story of impossible love coming true is the theme of the movie NICK AND JANE. Jane (Dana Wheeler-Nicholson) is a corporate career woman, working to cut costs for her company. Sleek, coifed, well-dressed, and constantly having to skip lunch to work or to rush home to do more work, she is having an affair with another corporate-type at the office. Enter Nick (James McCaffrey), a New York cab driver, rough-shaven, free-spirited, artistic, and struggling with a live-in would-be rapper who does not help pay the rent. It is only a matter of time before Nick and Jane meet.

Jane decides to heed a friend’s advice, skip work and turn up at her boyfriend’s place during lunch at work one day to surprise him. Instead of a romantic rendezvous, she finds boyfriend in bed with a co-worker. After attacking the other woman in bed, Jane rushes out of the apartment in tears and jumps into what else…Nick’s cab. Nothing comes much out of this meeting, until the two meet again in a club, where Jane and her advise-giving friend run into Nick accidentally. They ask the surprised Nick to pose as Jane’s new paramour to make her old beau jealous.

The stage has been set for romance. Over time, the two become closer, but that is not all on Jane’s mind. There is a big brunch going on at Jane’s company, and she is obliged to bring Nick. So she goes about sprucing Nick up, clean-shaving him, dressing him up in Madison Ave. suits, and drilling him about corporate lingo. He goes to the brunch and makes Jane’s old beau so jealous that the man apologizes to Jane and says he wants to make amends. Who does Jane pick as her lover? No big guess here.

NICK AND JANE is so predictable that it is a chore to watch this film. Right from the start where scenes show slices of New York life from Times Square to garbage disposal workers, the movie sets a stale tone. There are no big surprises beyond the expected. The characters with their upwardly mobile lifestyles and ambitions, the obstacles of their blossoming romances and the final outcome of their struggling romance are so predictable, one wonders why this movie was created in the first place.

First-time director Richard Mauro wanted to make a story out of his real-life experiences. Apparently, Mauro was set up to make a girlfriend’s ex-flame jealous and love blossomed out of this. Even when the film is not contrived, it has plenty of over-acting, especially from Nick’s roommate. Thankfully, the performances of Dana Wheeler-Nicholson as Jane and James McCaffrey as Nick are charming and sweet, and it is they who make the film bearable. Even though the script does not do their performances justice, they give the movie its sole endearing quality. Overall, Richard Mauro’s work is amateurish and lacking in style.

There are also themes of promiscuity in the film, sleeping around is taken as a norm and when Jane rebels at finding her beau in bed with another babe, she acts not out of morality but out of personal anger. The bigger fault with the movie is in the portrayal of Jane as someone who is unable to see the inherent value in a person and who decides on a boyfriend based on how he helps her through her corporate dilemma.