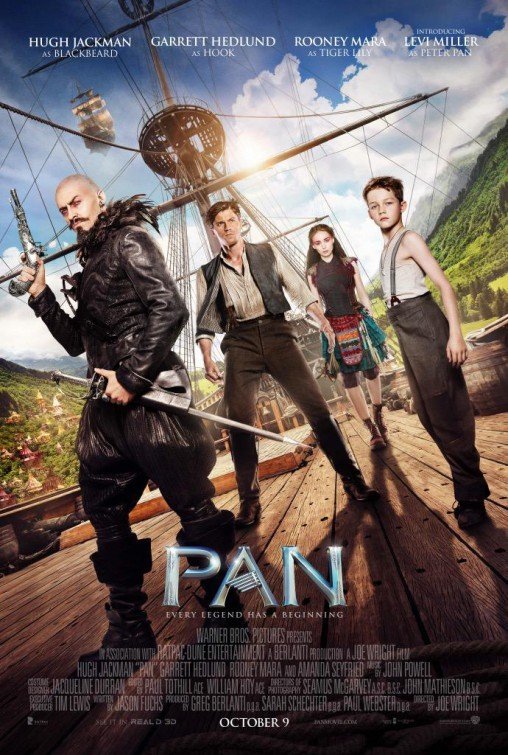 PAN is a new family fantasy that reveals Peter Pan’s origins. When he’s just a baby, Peter’s mother leaves him at an orphanage run by nuns. Twelve years later, Blackbeard the Pirate’s men kidnap Peter and some of the other orphans. They take them in Blackbeard’s flying ship to Neverland. There, Blackbeard makes them dig for fairy dust in a huge quarry amid giant rock formations. Peter hears of a prophecy among the natives in Neverland about a boy savior who can fly who will destroy Blackbeard. When Peter gets into trouble, Blackbeard makes him walk the plank, but Peter is almost able to fly away by thinking a happy thought. Is Peter the boy savior? PAN is an exciting adventure with stunning images. The actors give delightful, spirited performances. PAN has a moral, redemptive worldview stressing family and saving the peoples of Neverland, but some scary moments may be too much for younger children. Also, the head nun in the orphanage is mean and greedy, and lying is accepted by adults, but forgiveness is sought. PAN warrants caution for older children.

(BB, C, Pa, O, Ab, L, V, MM) Strong moral worldview, with some Christian, redemptive elements, promotes family bonds, searching for family, finding purpose, fighting tyrannical villain, asking for forgiveness, sacrifice, and there’s a prophecy of a character being the savior/messiah, and his mother is Mary, and images of a statue of the Virgin Mary, mixed with some pagan elements such as magical thinking, fairies have magical powers, character says lying is part of being an adult, and leading Catholic nun running orphanage in London is mean, greedy and in league with pirates; five relatively light obscenities; pirates take children in the night, pirates shoot at people, child is to walk the plank for doing bad, fighting, punching, lots of swordplay, people fall from great heights, ship cannons fire, pirate ship tries to burn fairies; no sexual content; no nudity; no alcohol use; no smoking or illegal drugs, but character uses pixie dust to rejuvenate himself; and lying, kidnapping, slave labor, and older character is Captain Hook and says things to Peter Pan like it’s natural for adults to lie.

PAN is a new family fantasy that tells the origins of Peter Pan and how he came to live in Neverland. When he’s just a baby, Peter’s young mother drops him off at an orphanage run by nuns. Twelve years later, it’s World War II, and the lead nun is mean and grumpy. Peter and his friend, Nibs, suspect the mean nun is taking rations for herself. Sure enough, they find one night that this is what she’s been doing. Strangely, she also seems to have a chest full of gold coins. Peter and Nibs also find the files on all of the orphans, including Peter’s file, containing one letter from Peter’s mother.

In the letter, Peter’s mother says she will be reunited with him, in this world or another and also gives him her love. Peter is intrigued and desires to find his mother. When Peter and the rest of the orphans fall asleep, goofy pirates come from the ceiling, grab the orphans and take them on their floating boat. They grab Peter, but Nibs escapes. Peter and the other orphans don’t know where they are going, but soon they arrive in Neverland, after traveling through space and time. When they arrive there is a huge amount of orphans already there, all mining a huge quarry amid giant rock formations. The boat stops and the lead pirate comes out, Blackbeard. Blackbeard has control over all the mining and is forcing the orphans to mine for fairy dust. With the fairy dust, Blackbeard is able to stay young. When Peter finds a big piece of fairy rock, an older miner lies and says he found the rock. Blackbeard forces Peter to walk the plank, telling Peter, “Think happy thoughts.” To save himself from falling to his death, Peter is suddenly able to fly.

Back in Blackbeard’s cabin, Blackbeard tells Peter that the island’s natives have a messianic prophecy about a boy savior who can fly. Blackbeard wonders if Peter is the savior. Peter thinks the natives might know about his mother. With the help of a man named James Hook, Peter escapes Blackbeard’s jail. Peter, Hook and another man, Smee, steal one of Blackbeard’s flying pirate ships and avoid being recaptured. Peter plans to go ask the natives about his mother, but Blackbeard and his men are not far behind. PAN has a good storyline and is very well paced. The costumes are excellent, but some moments may be a bit scary for younger children.

Though the director, Joe Wright, built sets, the movie has a lot of CGI effects, much like the movie OZ THE GREAT AND POWERFUL. Despite this, PAN has many stunning, exciting, spectacular images. Wright often focuses on the visual, and the movie goes from darker colors to lighter, brighter, joyous colors as Peter find his purpose. PAN has a strong moral worldview overall, with redemptive elements. Positive elements include the storyline of a savior, whose mother is named Mary. Peter finds purpose in finding his mother and receiving love from her. There’s also an Irish folksong with a blessing for God to hold you in His hand. There are some negative elements, however. First, the lead nun is mean and greedy. Secondly, Hook says lying is a normal thing for adults to do. Finally, there’s some brief foul language and some magical thinking. All in all, therefore, PAN warrants caution for older children.