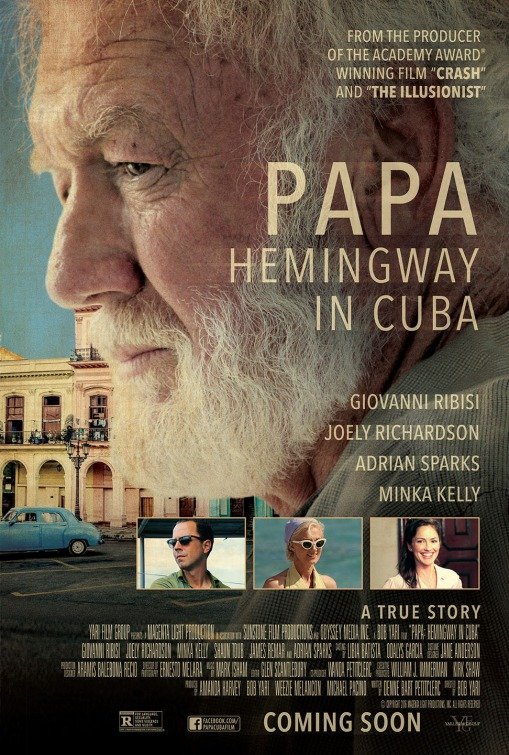 In PAPA: HEMINGWAY IN CUBA, journalist Ed Myers in 1957 decides on a whim to write a letter of praise to his hero, Ernest Hemingway. He’s surprised when he receives a reply inviting him to the Hemingway home in Cuba. Myers makes the trip, along with many subsequent others over the next several months. The orphaned Myers gradually becomes part of the family, privy to the emotional upheavals that Hemingway begins to experience as Castro’s Cuban revolution takes shape. Eventually, Myers finds himself caught in the middle as the FBI confronts him about Hemingway’s politics.

PAPA: HEMINGWAY IN CUBA is based on the true story of a reporter who befriended Hemingway and spent many years in Cuba with his family. Filming on the original Hemingway homestead just outside of Havana brings an authenticity to the movie that may excite historians and Hemingway buffs alike. So, fans may enjoy this intimate look into the author’s life. However, there are a couple overly melodramatic scenes, plus some questionable content, including foul language, graphic violence, a couple bedroom scenes, nude swimming, and sympathy for Castro’s revolution.

(B, H, C, CoCo, AP, Ho, LLL, VVV, SS, NNN, AA, D, MM) Light moral worldview where characters are held accountable for wrongdoing though title character is clearly troubled, angry and sometimes suicidal, Hemingway shows remorse for cheating on his wife in the past, one scene shows Hemingway saying he never cared for God but would pray for a terminally ill friend, several scenes show Castro’s regime in the process of rising to power in Cuba, and Hemingway naively sides with the revolution and against America, plus a character recalls an event in his past where he witnessed a group of men blackmailing someone because of homosexual acts; 31 obscenities and profanities, the middle finger gesture is used, offensive slang terms are used to refer to men and women on multiple occasions; very strong and strong violence includes a bloody Gangrene wound is shown, several scenes depict gunfights and men being killed, a man is ambushed and shot dozens of times, several scenes depict a man attempting suicide with a gun, a man is punched and slapped on the face; depicted fornication in a couple scenes, character tells a story about how he cheated on his wife, a story is told about men having sexual relations with each other, and several scenes include some sexual innuendo; several scenes show characters swimming naked with partial or very brief full nudity, natural upper male nudity in several scenes; a few scenes depict drinking and moderate drunkenness; several scenes show cigar and cigarette smoking; and, men lie to their wives or girlfriends, weapons are smuggled into Cuba, the FBI tries to frame someone, a husband and wife vehemently argue in a couple scenes.

Based on a true story, PAPA: HEMINGWAY IN CUBA tells the story of a young reporter in 1957, who writes to his hero, Ernest Hemingway, and is invited to Cuba, where he gradually becomes the son Hemingway and his wife never had. PAPA: HEMINGWAY IN CUBA has some interesting, intimate scenes involving one of America’s most prolific authors, but there are a couple overly melodramatic scenes, along with some graphic violence, sexual content, nudity, foul language, and sympathy expressed for Fidel Castro’s Cuban revolution.

The movie opens on the life of Ed Myers, a small child whose parents give him up to an orphanage during the Great Depression. He winds up a beat reporter for a large Miami newspaper, using the Ernest Hemingway novels sitting on his desk as inspiration. Myers decides on a whim to write Hemingway a letter of adoration, proclaiming that the author saved his life and career.

The heartfelt letter is accidentally sent to Hemingway. It unexpectedly gets a response back, inviting Ed to visit Hemingway in Cuba for a weekend of fishing on his boat. The letter from Hemingway manages to impress Myers’ fellow reporter, Debbie, who shares a romantic attraction with him. However, Myers is reluctant to get involved in a relationship and uses his trip to Cuba to prioritize his work over love.

In short order, Myers finds himself in the waters off Cuba’s shore being led to a yacht piloted by none other than Hemingway. The famous author resembles more of a disheveled mercenary than an American hero, but is nonetheless welcoming. At Hemingway’s home a few miles outside of Havana, Myers takes in the intimate scenes of the household as Hemingway and his wife, Mary, strip off their robes and swim naked in the pool. Over the next several days, Myers reveals he’s an orphan and tells the full story of how he learned to write from Hemingway’s novels. The couple is quick to “adopt” Myers into their family and offer to take the place of his parents.

All this leads to many more subsequent trips to Cuba, trying the patience of Debbie, who is now involved in a love affair with Myers. Having gained courage from the Hemingway’s example of marriage, Myers and Debbie decide to give romance a shot.

Fidel Castro’s revolution is also an attraction for Myers as his newspaper continues to assign him exclusive stories on the regime’s takeover. Myers gets more than he bargained for, however, when he’s confronted by the FBI and the Mafia, who are seeking insider information on Hemingway’s political dealings. As Myers becomes more privy to the private life of Ernest and Mary, it becomes clear their marriage isn’t as happy as it appears to be. Also, Hemingway’s ongoing writer’s block is fueling multiple suicide attempts. Myers is faced with the challenge of saving Hemingway from himself and from a government that wants him behind bars.

PAPA: HEMINGWAY IN CUBA is based on the true story of a reporter who befriended Hemingway and spent many years in Cuba with his family. Filming on the original Hemingway homestead just outside of Havana brings an authenticity to the movie that may excite historians and Hemingway buffs alike. So, fans may enjoy this intimate look into the author’s life. However, there are a couple of overly melodramatic scenes, both in dialogue and acting. They stick out like a sore thumb. The relationship between Myers and Debbie is obviously meant to be an important part of the story, but it’s largely pushed aside and not developed well enough for there to be much sympathy for the characters when things start to go wrong.

The movie’s worldview is overall a moral one. Characters are aware and even remorseful about wrongdoings in the past and present. Hemingway brings up the issue of prayer, saying he’d never cared for God, but would pray for a terminally ill friend. There is plenty of free nudity with several scenes showing naked characters going for a swim. Myers and Debbie are shown in the act of fornication on a couple occasions. There’s some obscene language, and several scenes depict Hemingway and his wife fighting vehemently with one another after one of them gets drunk. Also, Hemingway is sometimes suicidal. Finally, PAPA: HEMINGWAY IN CUBA also contains some graphic violence and expressions of sympathy for Castro’s communist revolution, which turned out worse than expected.