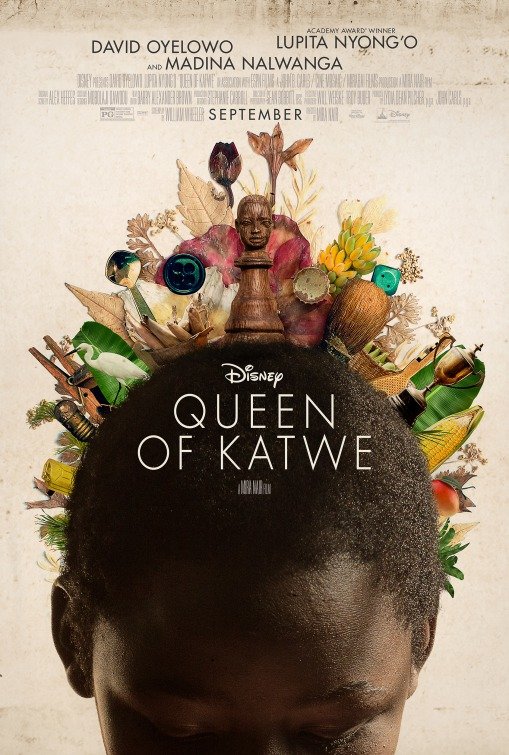 QUEEN OF KATWE is top-notch movie making, with great acting, visually appealing cinematography, crisp editing, and a wonderful storyline. Best of all, it has a strong Christian, biblical, capitalist worldview that extols faith, prayer, hard work, family, sacrifice, and helping others. It tells a true story about a young girl living in poverty, who, with the help of a Christian ministry, rises above her circumstances to help provide for her own family. QUEEN OF KATWE will inspire families and children everywhere.

(CCC, BBB, CapCapCap, FR, L, V, S, N, M) Very strong Christian, biblical, capitalist worldview with prayer, cross, sacrifice, a church ministry helps impoverished children, the Lord’s Prayer, a strong widow does everything she can to protect her children from an immoral lifestyle, hard work and achievement are extolled, and one girl questions God’s involvement in her life and rebels, but later learns the repercussions, plus there’s a girl wears a Muslim hijab; no obscenities, but one light profanity; light violence includes girl hits boy, and a boy is hit by motorcycle and taken to the hospital, and viewers see his wounds and some blood; implied sex outside of marriage, an implied commentary on prostitution and kissing in marriage; upper male nudity; light drinking; no smoking or drug use; and, nothing else objectionable.

QUEEN OF KATWE is a powerful drama about a pre-adolescent girl living in the slums of Uganda, who gets a new lease on life after becoming a master chess player. QUEEN OF KATWE is a touching, uplifting story with strong Christian faith and positive moral messages that will inspire families and children everywhere.

Phiona is a pre teen girl living in the slums of Uganda, Africa. Every day, her and her siblings sell maze on the streets and many times are rejected. One day Phiona wonders where her brother is always going, so she follows him. She sees him go to an open building with a group of other children and one adult. All the children are playing chess games against each other. The adult, who they all call Coach, sees Phiona peeking and tells her to come play. The other children instantly tease her for smelling bad, but she fights back, and one of the other little girls shows her how to play.

Phiona becomes hooked on the game. Even when she’s home, she can’t stop thinking about the game. In fact, it’s the one thing that distracts her from the sadness of her home life. Her father has died, and her mother is carrying all the weight of raising a family, including one rebellious daughter named Night.

Night decides to leave home and be with her boyfriend, even though her mother has told her not to do that. Since Night was helping sell maze in the streets, the family is once again behind on income and in danger of getting thrown out of their hut. At this point Phiona is showing great promise in Chess, but her mother must decide if she will allow her daughter to spend time away from bringing them money.

QUEEN OF KATWE is a touching movie that sends many positive cultural messages. The movie is uplifting, poignant and well made. Most of the young actors are from Uganda and are new talent, but they do an amazing job.

QUEEN OF KATWE has a strong Christian, biblical worldview, with overt Christian content extolling faith, prayer, sacrifice, hard work, and family. Phiona and the other children learn chess from a Christian ministry. Each time they meet, they pray, eat and play chess. The chess coach is doing this work to love and help the underprivileged children of the slums of Uganda, even though he has offers elsewhere to make more money. The movie does show one character questioning God and trying to take her life in her own hands, but this leads to some serious repercussions.

At this time in our society, when some are complaining all the time about income inequality, QUEEN OF KATWE is a true story about a young girl living in poverty who, with the help of a Christian ministry, rises above her circumstances to help provide for her own family. The movie also portrays a strong, determined widowed mother, who does everything she can to protect her children from getting sucked up in the mirage of sex, money, drinking, and drugs.

All in all, QUEEN OF KATWE is top quality cinema, with great acting, visually appealing cinematography, crisp editing, and a wonderful story that will inspire families and children everywhere.

Rent or Buy QUEEN OF KATWE: