"May This Movie Rest In Peace" 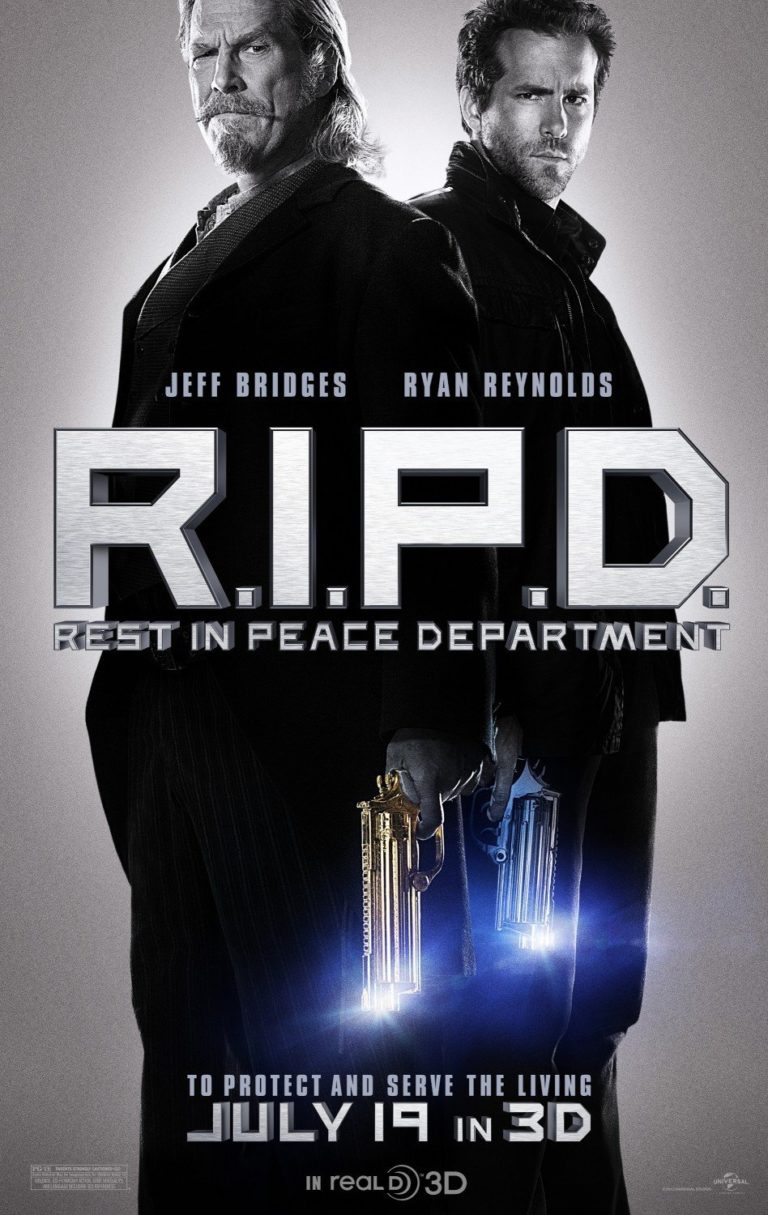 R.I.P.D. is a science fiction movie about Nick, a dead, former Boston cop who is sent back to Earth from the netherworld to help catch dead souls for the Rest In Peace Department. He is partnered with Roy, an old cowboy R.I.P.D. veteran that is as reckless as he is good looking. They begin to investigate a conspiracy plot to unleash hell on earth, literally.

R.I.P.D. has a few funny moments delivered by Jeff Bridges, who plays the cowboy Roy. Overall, however, the movie is horrendous filmmaking with poor writing, unlikeable characters and action that will bore the audience. There’s not even many moral elements that can be gleamed from the movie. Nick and Roy do believe in protecting the earth from dead souls so that human life can continue, but, for the most part, the filmmakers miss so many good opportunities for meaningful moments. The pagan worldview states that there is a hell, but all religious overtones are avoided. Instead, "the universe" is substituted for God. R.I.P.D. has no redeeming value. The strong profanities, sexual references and action violence warrants extreme caution.

(PaPa, B, LLL, VV, S, N, MM) Strong pagan worldview, light moral themes of protecting humans from dead souls and also being a crooked cop is seen as hell worthy, shell is a major aspect of the movie because the main character was on his way to hell, but God is replaced with “the universe,” and Christian references are avoided, an ancient artifact is used to magically unleash all the dead souls of hell on earth, it’s also mentioned that global warming is caused by dead souls hiding on earth; 30 obscenities, 7 strong profanities and the middle fingers is used 3 times; strong action violence include scary monsters getting shot, one pulls its arm off to get out of handcuffs, others get hit by cars and fall off buildings, men take quite the beatings, but since they are already dead their bodies are durable, so they aren’t harmed, a woman is stabbed with a metal stake, and blood pours out, the monsters look like grotesque deformed humans, one monster vomits; sexual content includes man being straddled by his wife in bed who is only wearing a shirt and underwear, they kiss and sex is implied, pornography is mentioned, several sexual jokes are made, man many times weirdly ogles women's ankles; man’s earthly identity is a young blonde woman who wears a tight forming cleavage bearing dress, man's wife in her underwear with a shirt on, upper male nudity and partial male rear nudity; no drug use; and, man is a crooked cop who regrets his actions, a man says a racist joke.

R.I.P.D. is a science fiction story that doesn’t seem to be aware of an almost identical movie called MEN IN BLACK. In R.I.P.D. we have Nick, a Boston Police Officer who is trying to provide for his wife Julia. What Julia doesn’t know is that Nick and his partner Bobby have stolen some gold that was supposed to be evidence for a crime. Nick feels guilty about it, and he tells Bobby that he doesn’t want go through with the crime. Bobby says he understands and that he’ll return the gold along with him.

The police department, along with Nick and Bobby get called out to a drug bust at a warehouse. When a fire fight breaks out between the criminals and the police, Bobby uses this opportunity to betray Nick and kill him. After getting shot and killed by Bobby, Nick is then lifted into the air towards a giant hole in the sky that is presumably hell, but something intervenes, and he suddenly appears in a office at a desk with a women in uniform sitting across from him. She explains to Nick that he’s dead, but “the universe” needs his skills to help catch dead souls that are hiding on earth. They’re called the Rest In Peace Department. Without much thought or explanation, he agrees to help.

The women, who goes by Mildred, partners Nick up with Roy, a veteran R.I.P.D. officer who clearly is from the cowboy era. Their mission is to catch Deado’s, which are dead souls that pretty much just look like grotesque deformed humans. On earth, they are no longer seen in their original body. Roy’s R.I.P.D. identity is a young blonde woman and Nicks is an old asian man. As soon as they start working together, Nick uncovers a plot that may unleash hell on earth, literally.

R.I.P.D. has a few funny moments. Jeff Bridges as the Cowboy officer Roy is a fun character with entertaining quirks, but the story seems to be a direct copy of movies like MEN IN BLACK and GHOSTBUSTERS. The only difference is that R.I.P.D. doesn’t borrow any of the quality filmmaking from either of those movies. The audience is merely expected to accept the premise of the story without any good explanation. We are told to like these emotionless characters, but we don’t why. Even the CGI and special effects are sub par.

There’s not that many moral elements that can be gleaned from the movie. It’s clear that being a crooked cop is bad, Nick was even headed to hell for it. Nick and Roy also clearly believe in protecting the earth from dead souls so that human life can continue. For the most part, however, the filmmakers miss so many good opportunities for meaningful moments. In R.I.P.D., it’s obvious that there’s a hell, but the movie still avoids any religious overtones, essentially giving it a pagan worldview. Roy makes mention of “the universe” controlling things, and there’s a higher up command called “Eternal Affairs.” This important and unexplained aspect of the story just leaves the audience confused. R.I.P.D. has no redeeming value. The strong profanities, sexual references and action violence warrants extreme caution.