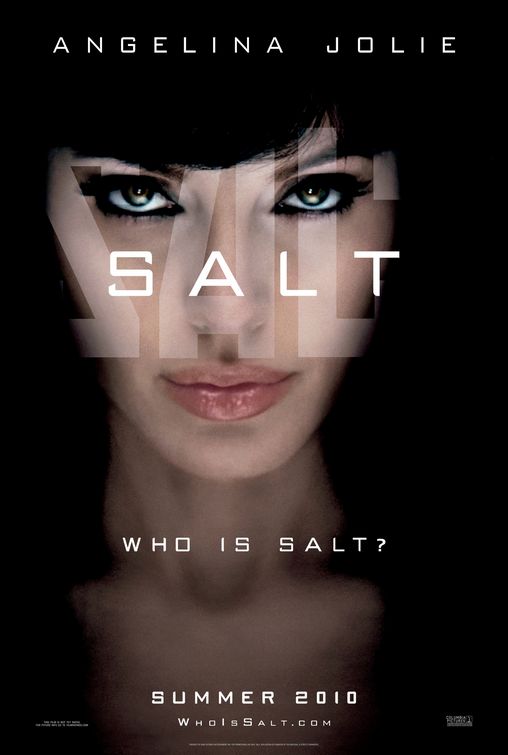 At the beginning of the new spy thriller, SALT, the title character, played by Angelina Jolie, protests, “I’m not who you think I am.” That remains the central question of this clever spy thriller. During an interrogation, American spy Evelyn Salt is accused of being a Russian double agent. Before being questioned herself, Evelyn escapes. Her biggest concern seems to be for her husband’s safety. Eventually, the action packed story leads to a dastardly plot by Russian Communist sleeper agents to kill the Russian president and destroy the United States.

SALT is a taut thriller that will keep audiences guessing and hanging on till the end. Although some action sequences are outlandish, the story holds together, and the crosses and double-crosses follow well. Jolie does a solid job, never leading too far one way or the other. It’s clear in this moral, anti-Communist piece that the Soviets during the Cold War and their supporters and spies are responsible for much evil. Also, the action violence is very intense and sometimes disturbing, so extreme caution is advised. Parents may want to think twice before letting their younger teens check out this movie.

(BB, ACAC, PP, Pa, FR, LL, VVV, A, D, M) Strong moral worldview, strongly anti-Communist and pro-American, strong view of value of spouse and defense of US entities, although it’s sometimes difficult to discern who is on which side, so the movie’s moral elements seem to be diminished by some pagan moral relativism; 13 obscenities (including one “f” word), 10 strong profanities and one light profanity; very high level of intense action violence, including multiple gun battles, car chases and crashes, including a taser-induced driver crashing off an overpass, and martial arts violence with some blood, mostly on lead character; no sex scenes; no nudity but woman in North Korean prison in lingerie; some alcohol use when guests drinking at a wedding; some smoking, but no drug references; and, treason but it is eventually defeated, lying and false accusations.

Bloody and dressed only in her underwear, Evelyn Salt (played by Angelina Jolie,) the title character of “Salt” is locked up in a North Korean prison, protesting, “I’m not who you think I am,” and that remains the haunting lament of this clever spy thriller. Harkening back to the classic (that is, US versus Soviets) Cold War espionage that invented the spy genre, “Salt” has plenty of twists and turns, leading audiences one way, then the other, but always coming back to the question, “Who is Salt?”

Salt is soon back home stateside, an American operative for the CIA. Her boss, Ted Winter (played by Liev Schreiber), has her interrogate Orlov, a Russian defector (played by Daniel Olbrychski). Counter-intelligence Agent Peabody (played by Chiwetel Ejiofor) is there to make sure everything is done according to company guidelines. Orlov finishes his play, naming Evelyn Salt as the Russian mole who will assassinate the Russian President. The prisoner is escorted away, and Peabody demands that Salt be questioned, even though Winter defends her reputation. Evelyn’s key concern, however, is her husband’s welfare.

Much of the story’s character development comes through flashbacks, such as the important elements about Evelyn and her husband, her life as a child, who those new people are. Somehow these pieces of the puzzle all come at just the right time to fill in the blank spaces the audience has just started to wonder about during the movie.

Orlov escapes, and, through her own cunning, so does Salt. She blasts her way out with some improvised munitions, and tries to make it home to save her husband, but he’s gone. She escapes from her building, climbing on the window ledges several floors up, only a few steps ahead of her former colleagues who are now pursuing her.

At this point, the body count begins, and it’s difficult to discern to whom Salt is more dangerous: American agents, or the bad guys. The chase that ensues is outlandish, with Salt jumping from one high speed, semi to another. Unfortunately, when the Russian President makes his appearance, the assassination attempt occurs, and the leading suspect is Salt.

Who is Salt? She’s captured, but swiftly she escapes. Although there are many incidents of bone-cracking duels and massive gun battles, one of the most disturbing sequences is when Salt crashes through traffic, destroying multiple law enforcement vehicles and manipulating the driver through electronic bursts from a taser. Many lives are lost.

In a chilling turn, Salt returns to Orlov. Is she an enemy agent? What’s really happening?

Eventually, everything leads to a dastardly plan to destroy the United States and start a war with the Muslim countries, leading to Russian becoming the top dog again, like in the old days of the Soviet Union, but without America to oppose them.

“Salt” kicks off at a quick pace, and it seldom lets up, although there are moments of rest for the viewer to breathe with the characters. Director Phillip Noyce and screenwriter Kurt Wimmer have delivered an effective thriller. Although most of the action sequences are outlandish, with high speed thrills overriding any semblance of logic, the story strings together nicely. Action aside, the crosses and double-crosses follow reasonably well, with flashbacks that develop a little more of why things are happening the way they do. Wimmer has woven a tapestry of deceit, giving audiences only enough information until they absolutely need to know, and then the payoff works. The story moves well, and, regardless of the postmodern element of flashing back to important moments from Salt’s past, they add up to a satisfying whole. Ultimately, SALT is a taut thriller that will keep audiences guessing and hanging on till the end.

In the title role, Angelina Jolie does a solid job, never leading on one way or the other, which can be a tricky tightrope to walk in this sort of thriller. As an undercover agent, and perhaps a mole, there’s still allowance for some character development where viewers are allowed underneath the surface to see the motive, and, perhaps, the heart of Evelyn Salt. She seems deeply concerned for her husband, who may be at risk because of the accusation she has received of being a Soviet mole. The audience is allowed into her character enough to care about her, and that’s a great accomplishment. Beyond the chiseled features, Jolie shows us a person behind the flying kicks and bursts of gunfire.

As the boss who may have been led astray, Liev Schreiber lends a solid credibility to agency department head Ted Winter. His character simply appears to be trying to figure it all out but may understand more than he reveals to others. Trying to make sense out of the two of them, Chiwetel Ejiofor as Agent Peabody pushes and shoves his way through, demanding justice while he’s being clearly deceived by the people he needs to trust. His performance is crisp and unyielding, perfect for the role.

All that being said, there’s plenty of action violence (car chases, martial arts, gun battles,) and some of it is disturbing. During one chase, Salt commandeers a police vehicle by charging the police officer driving with a taser, so that the impulses will cause him to drive faster. This leads to multiple accidents, including one vehicle careening off an overpass. The martial arts ballets of mayhem include many bones that snap, crackle and pop, replete with the sound effects of those crippling injuries. That’s just Salt in the wound. Finally, in some of the last scenes, viewers see watch Salt repeatedly beaten, pummeled, and punched in the face.

The Cold War appears to be back, as it is difficult to see who is the good guy between all the crosses and double-crosses. Ultimately, though, it’s clear that the Russians and the Communists are up to no good, and whether Salt is one of them or that she’s against them, ‘they’ are clearly working the ways of evil. SALT does seem somewhat relativistic in that it’s okay to disable and/or kill lots people if you’re on the right side. It’s just hard to discern on which side the characters are sometimes.

Take this movie with a grain of discernment, as there is excessive violence and some foul language, so you may want to think twice before letting your younger teens check out this movie.