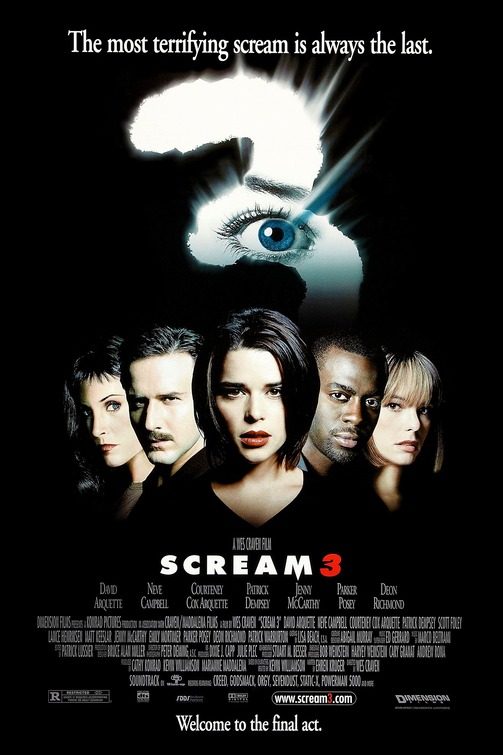 SCREAM 3 is much the same as the previous SCREAM movies, with a masked killer, who-done-it plotlines, silly humor, and self-referential expositions. Sidney Prescott has moved away to California, lives alone under a different name and provides phone counseling for violent crime victims. Meanwhile, former Sheriff Deputy Dewey is acting as consultant for STAB 3, a movie based on the murders made famous in the first two movies. Various cast members end up killed, and Sydney comes out of hiding to draw out the killer. Loose ends of the trilogy are tied up as the killer is brought to a final end.

The good news is SCREAM 3 has slightly less blood and not as many gruesome deaths as the previous movies. Sex and nudity are also gone. The bad news is it’s still violent entertainment aimed at young people, with excessive foul language. A few cameo appearances occur, and the rules of movie trilogies are explained. So, is SCREAM 3 redeeming? Clean? O.K. for teenagers? No. But, of the three movies, it’s the least offensive, and, hence for some teenagers, the least thrilling.

(PaPa, B, C, LLL, VVV, A, D, M):
Dominant Worldview and Other Worldview Content/Elements:
Strong pagan worldview of an obsessive, psycho-killer with a few moral, redemptive elements of forgiveness, protecting loved ones, a marriage, and a call to take responsibility over one’s actions
Foul Language:
39 obscenities and 22 profanities
Violence:
Very strong violence includes many deaths by stabbing with bloodshed, mild car accident, house blows up in flames, and man is thrown out window
Sex:
No sex
Nudity:
No nudity but a few tight tops on busty women
Alcohol Use:
Alcohol use
Smoking and/or Drug Use and Abuse:
Smoking, but no drugs; and,
Miscellaneous Immorality:
Lying and deception by killer to victims.

A third helping of anything can make one sick, so luckily SCREAM 3 may be just light enough to not cause nausea. With the masked killer, who-done-it plot lines, silly humor, and self-referential expositions just like the previous SCREAM movies, this movie has slightly less blood, not as many gruesome deaths and no sex or nudity, but still provides dangerous scares from a psycho-killer motif.

Sidney Prescott (Neve Campbell) has moved away to California from her small town and the home where multiple stabbings took place in the previous movies. She lives alone under a different name and provides phone counseling for violent crime victims. Meanwhile, Dewey (David Arquette) is acting as consultant for the creation of STAB 3, a movie based on the Woodbury murders. Gale Weathers (Arquette’s real-life wife Courtney Cox) shows up when a key player in the original murders is murdered himself.

Soon, various cast members of the movie end up killed, so production shuts down. Gale, followed by the actress that plays her in STAB 3 (Parkey Posey), tries to one up the others in the sleuth work. Various new characters are introduced such as Detective Kincaid (Patrick Dempsey) and director Roman Bridger (Scott Foley) and devices are created to encourage the audience to draw conclusions as to suspects. Sidney comes out of hiding to draw out the killer, and the loose ends of the trilogy are tied up as the killer is hopefully and finally brought down to a conclusive end.

Some fun is produced through a few star cameo appearances. The logic rules of movie trilogies are explained – meaning all bets are off and anybody can be killed, including the leading hero or heroine. Also expect the unexpected, so when you think someone is dead, think again.

The psycho-killer is a well-used convention in horror movies ever since Alfred Hitchcock’s PSYCHO, and so SCEAM3 brings nothing new with the main source of terror. Hostilities between some characters have been patched up. Gale Weathers and Sidney Prescott, for instance, actually embrace and wish each other well. New creepiness occurs when Sidney has visions of seeing her deceased mother. Thankfully, most of the stabbing isn’t graphic and, while there are corpses in blood, there aren’t a lot of near dead blood-soaked characters running around like the previous movies. Also, there are very little grotesque death scenes where a character is creatively, but grossly, murdered. Entrails are nowhere to be seen. Sex and nudity are also gone.

So, is SCREAM 3 redeeming? Clean? O.K. for your teenager? Definitely not. However, of the three it is the least offensive, and, hence for some teenagers, the least thrilling.

So, will there be another SCREAM? Who knows, but this movie does bring the series to a resolution. The characters who have feared the most now have good reason to let their fears die.