SELAH AND THE SPADES 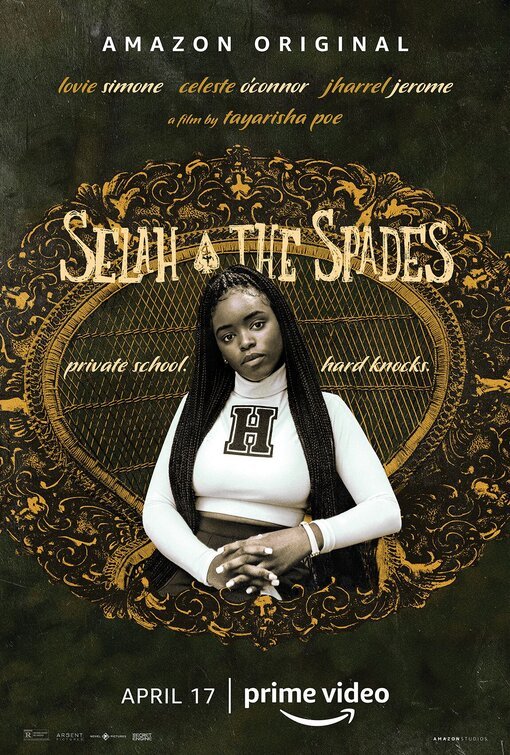 SELAH AND THE SPADES, a drama on Amazon Prime, is about a teenage girl running the top underground faction at an Eastern boarding school. Selah runs the Spades, which makes sure students have drugs and alcohol for secret parties. A master manipulator, Selah has no successor to take over when she graduates. She identifies a possible candidate, an incoming sophomore named Paloma. Paloma turns out to be a fast learner. She’s also more likeable, however. So, when it looks like Paloma’s starting to outshine her mentor, Selah decides to take drastic, deadly action to reassert her power.

SELAH AND THE SPADES isn’t convincing. The story is about the corruption and abuse of power that ensnares Selah as leader of the school’s top underground faction. However, abuse of power is clearly not the boarding school’s biggest problem. The biggest problem is the fact that these teenage students are able to buy, sell and use alcohol and drugs. The movie’s power theme doesn’t really address this problem. Ultimately, SELAH AND THE SPADES is a shallow, unrewarding treatment of teenage substance abuse and modern teenage shenanigans.

(B, PaPa, LLL, V, S, AA, DDD, MM):
Dominant Worldview and Other Worldview Content/Elements:
Light morality tale about a student leader at a fancy boarding school who abuses her power as leader of an underground faction that provides alcohol and drugs for teenage students at underground parties, but the movie doesn’t really address the substance abuse problem at the school, much less the general disobedience and immorality inherent in the school’s underground student factions, plus teenagers escape punishment for bad behavior, though an evil plot is foiled
Foul Language:
27 obscenities (including several “f” words), three GD profanities and two light profanities
Violence:
Girl drugged without her knowledge and almost dies
Sex:
No sex scenes but a couple brief but light sexual references such as a comment advising boys to “keep it in their pants”
Nudity:
No nudity
Alcohol Use:
Underage drinking at high school that’s also a boarding school includes a group of teenagers provides alcohol for their classmates at underground parties
Smoking and/or Drug Use and Abuse:
Brief smoking and some very strong drug references includes teenagers sell pills and drugs to their classmates, use drugs and one girl spikes another girl’s drink with a drug overdose, and she almost dies, and there’s a story that the girl drugged another girl, and the girl ended up having a fatal car accident; and,
Miscellaneous Immorality:
Manipulation, lying, betrayal, jealousy, secretive students repeatedly disobey school rules and get away with it, and a mother in a phone call berates her daughter for only getting a 93 score on a test rather than a perfect 100 score.

SELAH AND THE SPADES, a drama streaming on Amazon Prime, is about a teenage girl running the top underground faction at an Eastern boarding school, a faction that makes sure the students have drugs and alcohol for their secret parties. SELAH AND THE SPADES presents a shallow, unconvincing and deceptive morality tale about the abuse of power, but this theme overlooks the bigger problems at this boarding school, where teenagers can buy drugs from a student leader who ends up trying to kill her replacement by putting a drug overdose into her drink.

The movie opens by telling viewers that five factions run the underground student life at Haldwell School, a prestigious Eastern boarding school. One faction sells essays and other academic helps to students. One faction handles gambling on sporting events. One faction organizes underground parties. One faction keeps the school administrators and teachers unaware of what’s going one. Finally, the fifth faction, called the Spades and run by a senior girl named Selah, gets the booze for the parties and also sells alcohol, pills and other drugs to students.

Selah is a master manipulator who can turn on the charm when she wants, but otherwise is tough as nails. However, she has no successor to take over the Spades when she graduates. She thinks, though, that she’s identified a possible candidate, an incoming sophomore named Paloma. So, Selah takes Paloma under her wing.

Paloma turns out to be a fast learner, despite her naivete. She’s also more likeable, however. So, when it looks like Paloma is starting to outshine her mentor, Selah decides to take drastic action to reassert her power.

SELAH AND THE SPADES is not totally convincing. The boarding school’s teachers and administrators are hardly seen, so there’s no real danger or jeopardy that they’ll uncover the underground parties, gambling and substance abuse. To make up for that, the movie tries to build up a rivalry between Selah and another girl running the faction throwing the underground parties. However, as the narrator notes in the very beginning, the story is about Selah, not about the underground factions.

Ultimately, therefore, the real story is about the corruption and abuse of power that ensnares Selah as leader of the school’s top underground faction. However, corruption of power is clearly not the biggest problem at the boarding school. The biggest problem is the fact that these teenage students are able to buy, sell and use alcohol and drugs for and at their underground parties, under the noses of the school’s teachers and administrators. The movie’s power theme doesn’t really address this problem. Eventually, Selah’s easy access to drugs ends up with her putting a drug overdose into Paloma’s drink. In the final analysis, SELAH AND THE SPADES is a shallow, unrewarding treatment of teenage substance abuse and modern teenage shenanigans.

By the way, Dr. Ted Baehr and one of his sons went to one of the top three boarding schools. He notes that the close quarters and variety of students mitigates against anything like this happening.