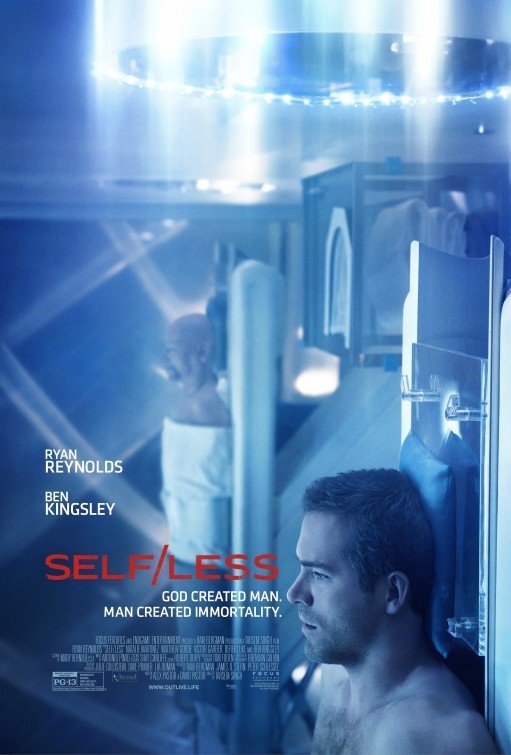 SELFLESS is a science fiction thriller depicting the downfalls of an advanced society. In the future, an elderly billionaire named Damien, dying from cancer, undergoes a medical procedure transferring his consciousness into a younger, supposedly new body. Yet all is not as it seems when he starts having flashbacks from a past life of the man whose body he has. Going against the orders of those who gave him the new body, Damien follows his visions. This takes him to the mother and daughter the younger man left behind. Damien and the other man’s family must now fight for their lives and justice. A dramatic, action-packed conclusion follows.

SELF/LESS is a fast-paced thriller. It will keep viewers guessing what comes next, but it often reads more like a series of scenes jammed together. Ultimately, SELF/LESS has a light redemptive, moral worldview promoting repentance, family, righting wrongs, and justice. Sadly, this positive outcome is marred by strong Romantic, pagan, anti-capitalist elements, foul language, and hedonistic behavior. There’s also a lot of intense action violence with some bloodshed. So, extreme caution is advised for SELF/LESS.

(C, BB, RoRo, PaPa, AcapAcap, LL, VVV, SS, NN, AA, MM) Light redemptive, moral worldview where a materialistic, elderly billionaire uses his wealth to get a new, younger body from a deceitful technology company but repents, learns the value of family over hedonistic pleasure and tries to fix things when he learns the body is that of a real person with a real family, not some kind of clone, but mitigated by some strong Romantic, pagan, anti-capitalist content where society has become a greedy, hedonistic place that believes wealth, money, power, luxury, and sex are the most important things in life, and one character takes his family away from all that to live with his family on an isolated island; seven obscenities (including the “f” and “d” word) and three or four light profanities consisting of a man throwing up in a toilet twice; lots of intense action violence with some bloodshed, including men set a house on fire, men shoot at each other with guns, several scenes depict men dying in explosive ways such as by fire, guns, fighting, being strangled and running off the road in speeding cars, numerous physical violence between grown men including fist fights, kicking, punching and knocking each other out, two big car chase scenes depicting reckless drivers and cars running into each other on and off the road, flipped vehicles, cars catch on fire; strong sexual content overall where sexual promiscuity displays two good looking men sleeping with lots of women, flashes of women having one night stands, women dancing in skimpy clothing at night clubs, women undress in their bra and underwear rolling around in bed with men; brief rear female nudity, implied frontal female nudity of a women holding her chest with her hands, backside nudity of a woman’s body in bed; alcohol use and drunkenness depicted at night clubs, men buy women drinks to get them drunk; no smoking or illegal drug content, but one futuristic drug used consistently throughout the movie to keep the main character from reverting back to his old body; and, woman and daughter kidnapped and held hostage, villains steal cars, blackmail protagonist blackmailed, excessive greed portrayed by the desire for money and material possessions.

SELF/LESS is a science fiction thriller about a futuristic world where a deceitful company gives an elderly billionaire with a supposedly new, younger body.

After an unexpected cancer diagnosis, a wealthy billionaire, Damian Hale (Ben Kingsly), decides to buy more time on Earth to bypass death. When a secret organization promises him a longer life in a healthy new body, he agrees. At the price of $250 million, Damian pays the organization to undergo an intense medical procedure that transfers his consciousness into the body of a younger man.

After the procedure, Damian, reborn as Edward, is sent to live in a luxurious mansion in New Orleans where a new life awaits. It doesn’t take him long before he dives back into the pleasures he had as a billionaire. He embarks on the fast life, wearing pressed suits, bouncing from club to club, and sleeping with any woman he wants. Yet, he begins to realize the materialistic things he has leave him empty and unsatisfied. When he stops taking his medication, he starts to have flashbacks from a former life and sees glimpses of a mother and daughter.

Going against the organization’s orders to stay put, Damian follows his visions, which lead him to the Midwest. There, he meets the beautiful Madeline (Natalie Martinez) and her daughter, Anna (Jaynee-Lynne Kinchen), and learns this new body of his is actually Madeline’s former husband, who sold his life so their daughter could live. After a tearful, confusing reunion with Madeline, he explains to her who he really is and the corruption behind the organization he thought would prosper him.

When the corrupt leaders find out Damian has gone against their plans, he, Anna and Madeline embark on a violent, fast-paced game of cat and mouse fighting for their lives from the organization. In their struggle to live, Damian finds out how to bring life back to the body he took. Through his time with Madeline and some touching daddy and daughter scenes with Anna, he learns money will never compare to the love of a family. Through their love, he learns what a poor father he was to his own daughter. Damian goes to visit his daughter and gives her a heart-filled letter of everything he wished he said when he was alive in his old body.

Everything leads to a dramatic conclusion filled with fistfights and machine guns.

SELF/LESS is a fast-paced thriller that will keep viewers guessing what comes next, but it often reads more like a series of scenes splashed together than a complete story. For example, the scene between the protagonist in his younger body with his own daughter is poorly pieced together with a lack in chemistry between these two characters. It plays more like a hasty conclusion to a forgotten main component in the story.

Ultimately, SELF/LESS has a light redemptive, moral worldview where the protagonist learns the error of his ways, discovers the importance of family and tries to fix the bad thing he was deceived into doing. As Damian accepts his own death, he concludes life on earth is not measured by how long you live, but what you do with the years you’re given. Sadly, this outcome is marred by some strong Romantic, pagan, anti-capitalist elements where capitalist society has become too materialistic, leading people to focus on hedonistic pursuits. The movie suggests this problem can’t be fixed, and the man who sold his body to the villains separates his family completely from that immoral society. SELF/LESS also has some foul language and promiscuity, which partly depicts the corruption of the hedonistic society in the movie and in the protagonist before he realizes the truth. There’s also a lot of intense action violence with some bloodshed. So, extreme caution is advised for SELF/LESS.