SHERLOCK HOLMES: A GAME OF SHADOWS 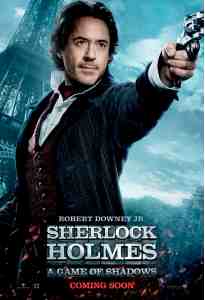 SHERLOCK HOLMES: A GAME OF SHADOWS is even more action packed than the first movie starring Robert Downey, Jr. as the iconic hero. In the story, set in Victorian England, Sherlock battles the evil Professor Moriarty. Sherlock’s investigation uncovers a plot by Moriarty to take over some rich companies and gain even more money and power as an arms merchant by starting a world war. Moriarty threatens to kill Dr. Watson and his new bride, Mary, so Holmes springs into action to save them and get Mary out of harms’ way. He and Watson proceed to France, Germany, and finally Switzerland to stop Moriarty, but the cunning professor always seems one step ahead.

A GAME OF SHADOWS provides almost non-stop action. It’s a highly enjoyable battle of wits between Holmes and Professor Moriarty. The script is better constructed than the first movie. Robert Downey, Jr. and Jude Law make an even more entertaining team as Holmes and Watson. All in all, the new SHERLOCK HOLMES movie is a fun entertainment where good conquers evil, but caution is advised for children under 13 or 14 for some intense action and brief suggestive content.

(BB, C, PP, CapCap, PaPa, O, L, VV, S, N, AA, DD, M) Strong moral worldview exposing and fighting ruthless villain with goodness, intelligence, courage, sacrifice, and loyal friendship, with a brief wedding scene in a Christian chapel, heroic husband is loyal to his wife, hero saves damsels in distress, heroes save friend’s life, hero offers up himself to stop villain, with strong patriotic elements and capitalist elements where heroes are trying to stop evil man from taking over several industries and companies by murder and other schemes and businessman makes toast that business transcends political differences and unites people of different nationalities, marred by some strong but implied pagan references and pagan drug use and a use of adrenaline, plus hero visiting gypsy woman uses Tarot cards to reveal what his investigation has revealed to him so far but he’s really working off clues and a letter he’s found; five obscenities (two “d” words and three uses of “bastard”) and one “My God” light exclamatory profanity; strong, sometimes intense, sometimes slightly bloody action violence includes martial arts fighting, punching, shooting, people thrown off train, man falls off second story, villain uses large hook tied to ceiling to impale hero’s shoulder and twist hook to get hero to talk, chase scenes, explosions, man assassinated, attempted assassination, woman poisoned to death, two men poisoned to death with small darts, soldiers fire artillery canons at heroes dashing through woods, villains fire Gatling gun at heroes, falls from great heights; a few innuendoes and men in raucous saloon gawk at two women covered in old-fashioned underwear who swing from a suspended swing; upper male nudity, plus rear male nudity in one scene as man in his own house wears no clothes in front of woman but she looks away and objects are placed strategically so nothing else explicit shows; alcohol use and drunkenness, and man drinks embalming fluid or formaldehyde; smoking, hero experiments with adrenaline to heighten his reaction time, which eventually also re-starts his heart at an important point, and Chinese man appears to be smoking opium on London street, plus newspaper refers to opium trader’s death; and, manipulation by villain, villain engaged in criminal enterprises and assassination plots, detective wears women’s clothes to secretly board train and save male friend and his bride, and detective does chemical experiments.

SHERLOCK HOLMES: A GAME OF SHADOWS is even more action packed than the first movie starring Robert Downey, Jr. as the iconic hero. The very suspenseful, exciting storyline provides a great battle of wits between good and evil, but it has some intense scenes of violence and brief crude content, so caution is advised, especially for pre-adolescents.

Set in 1891 in Victorian England, the movie opens with Sherlock saving the one woman he may love, Irene Adler, from a bomb planted by her current employer, the evil Professor Moriarty. Sherlock suspects Moriarty is involved in some anarchist bombings, the deaths of a steel magnate and a Chinese opium trader, and a scandal involving an Indian cotton tycoon.

Sherlock’s investigation leads to a beautiful gypsy woman whose brother has disappeared. Fearing Sherlock’s getting too close for comfort, Moriarty asks for a meeting with Sherlock. During the tense meeting, Sherlock refuses to stop his investigation. Then, Moriarty coldly threatens the lives of Sherlock’s friend Dr. Watson and his bride, Mary, who are just boarding a train for their honeymoon.

Sherlock springs into action. Wearing a disguise, he sneaks aboard the train. An intense battle ensues between the good guys and the men Moriarty has sent to kill Watson and Mary. Sherlock throws Mary off the train and out of harm’s way into a river, where his brother, Mycroft, waits in a boat. Meanwhile, Holmes and Watson follow clues about Moriarty’s plans to France, Germany, and finally Switzerland. Moriarty, however, always seems one step ahead in completing his plan, which will bring him immense wealth and power, and lead to world war.

A GAME OF SHADOWS is an intense, highly enjoyable battle of wits between Sherlock Holmes and Professor Moriarty. The script is better constructed than the first SHERLOCK HOLMES, with Robert Downey, Jr. as Holmes and Jude Law as Dr. Watson making an even more enjoyable team. That said, the movie could be a little shorter, despite a great conclusion. Holmes overtly opposes the evil of Moriarty, whom he calls a narcissistic, heartless psychopath. There’s plenty of thrilling action between them and with Moriarty’s henchmen, including the ruthless Col. Moran. Everything leads to an exciting finish that should please even Sherlock Holmes purists and anyone familiar with the original Arthur Conan Doyle stories about Professor Moriarty and his henchman, Col. Moran.

Some of the action in GAME OF SHADOWS is too intense for children and other sensitive people. It includes Moriarty wounding Sherlock Holmes and torturing him while Holmes dangles on a hook stuck in his shoulder. Rest assured, however, that Holmes has the last laugh.

In addition to the intense, sometimes slightly bloody action, A GAME OF SHADOWS contains some brief foul language and a couple double entendres. There’s also a reference to smoking opium and a scene where Holmes drinks embalming fluid or formaldehyde. In addition, a male nude scene is played for comic effect, though nothing very explicit is shown. Finally, while Holmes is occupied in interrogating the gypsy woman and defending her life against a couple of Moriarty’s henchmen upstairs at a raucous saloon, a drunken Watson gambles and celebrates his bachelor party downstairs. Two women clad in fancy old-fashioned underwear swing on two fancy swings for the enjoyment of the men in the saloon.

All in all, the new SHERLOCK HOLMES movie is a fun entertainment where good conquers evil, but caution is advised for children under 13 or 14.

Rent or Buy SHERLOCK HOLMES: A GAME OF SHADOWS: