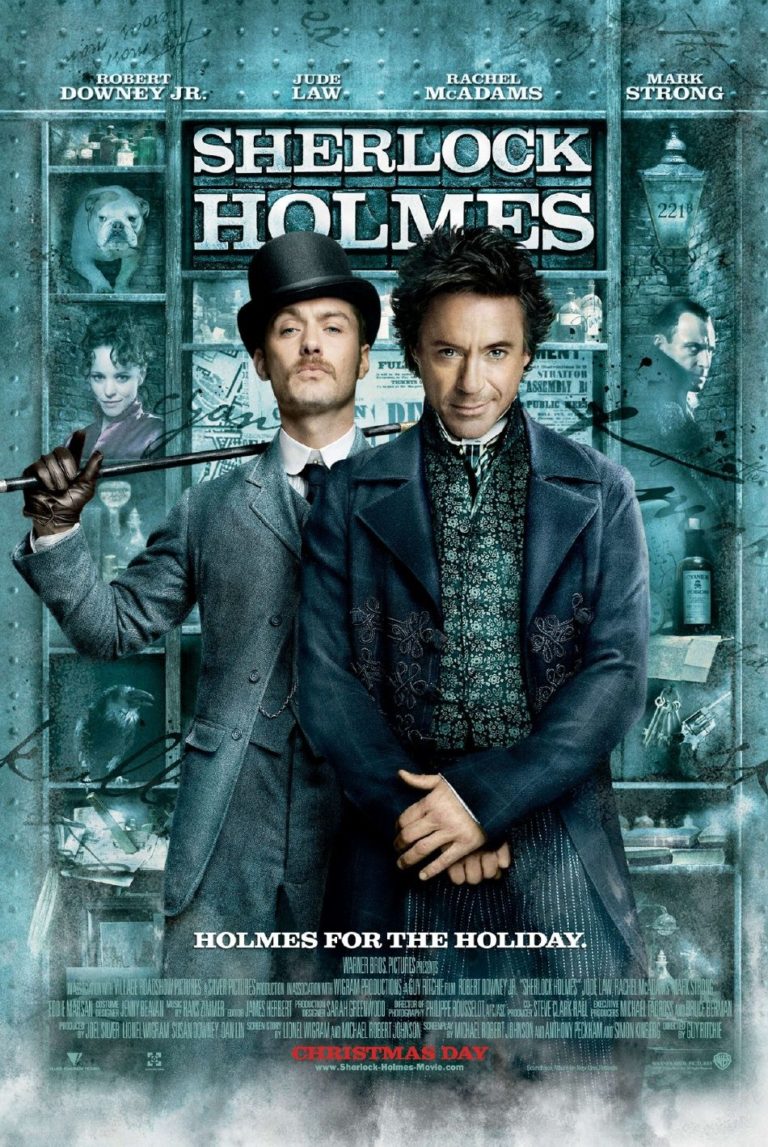 SHERLOCK HOLMES stars Robert Downey, Jr., as the world’s most famous detective. This time, Holmes and his brave and loyal companion, Dr. Watson, face Lord Blackwood, a practitioner of the black arts of magic. Blackwood has a nefarious scheme to take over the British government and rule the world. With help from the mysterious Irene Adler, the only person to defeat them, Holmes and Watson race to stop Blackwood’s evil plans. Can they prevent him from killing hundreds, if not millions, of more people?

SHERLOCK HOLMES is more action oriented than traditional Holmes stories, but Downey does a great job of creating a likeable and still brainy Sherlock. The rest of the cast is also excellent, including Jude Law as Dr. Watson and Rachel McAdams as the inscrutable Irene Adler. SHERLOCK HOLMES contains a couple double entendres, a nasty, scary villain, and strong action violence, so caution is warranted for older children. That said, it has a very strong moral worldview, with strong Christian values and content. With a bit of caution, MOVIEGUIDE® highly commends SHERLOCK HOLMES as one of the best, most entertaining, and positive movies of the year.

(BBB, CC, Pa, O, PPP, L, VV, N, M) Very strong moral, biblical worldview with strong Christian values and content stressing truth and goodness conquering demonic evil where evil, murderous villain is a pagan master of black magic and witchcraft who uses magic to gain tyrannical power and manipulate people, including the public, and becomes a kind of Antichrist, plus Christians are among those most vocally opposed to the villain, though they are not prominent characters in the movie, and hero acknowledges priest’s faith at a state execution, though hero is more action-oriented and more reason-oriented in his approach to stopping evil, plus very strong patriotic content in a British setting, with a positive portrayal of American ambassador who is the lone man in a meeting in London of a secret society who opposes the villain (the others give into the villain for one unstated reason or another); one “d” word and one light profanity such as Dear God, plus two double entendres, including one where a maid enters a room and handcuffed man with only a pillow covering his private parts makes a comical remark, and he comments later how being prudish makes some people interpret words in a salacious manner instead of the innocent manner in which they were intended; strong, sometimes in tense, but mostly action violence includes fighting, boxing match in one extended scene, internal discussion of crushing someone’s knee and dislocating another man’s jaw with punches, fiery explosions endanger three people in one scene, villain prevented from sacrificing a woman on a pagan/witchcraft altar, two hangings, chases, evil plan involves biological cyanide weapon, fight on top of high bridge being built on river, people fall from heights, man tries to kill another man with huge mallet, ship sinks, huge wheel and chain nearly kill a man, man uses electric device to send another man flying backwards several times, jumping, man killed in tub by something in water, etc.; no sex scenes but some kissing, a couple hugs after narrow escapes, and two double entendres; upper male nudity and upper bare back of woman exposed when she disrobes while going behind a screen to change clothes; brief alcohol use; brief pipe smoking; and, deceit by villain, a secret mystical society similar to the Masons is rebuked, and woman has secret motive because she’s working for someone, who turns out to be a villain, probably in preparation for the sequel.

Along with Mickey Mouse, Superman, and Santa Clause, Sherlock Holmes is one of the most recognized fictional characters in the world. According to one calculation, there are about 25,000 productions and products featuring Sherlock Holmes, including about 200 movies. And, that doesn’t even include things like the TV medical mysteries program HOUSE, which is loosely based on the Holmes character.

It is said by some that the closest any actors have come to portraying Sir Arthur Conan Doyle’s iconic detective hero are Basil Rathbone in a series of movies made during the Golden Age of Hollywood and Jeremy Brett of the famous BBC and PBS TV adaptations of Doyle’s stories and novels. Be that as it may, some other popular and/or favorite incarnations in cinema include such movies as A STUDY IN TERROR with John Neville, MURDER BY DECREE with Christopher Plummer and James Mason, THE 7% SOLUTION with Nicol Williamson and Robert Duvall, and Alan Arkin as Sigmund Freud, and THE PRIVATE LIFE OF SHERLOCK HOLMES with Robert Stephens.

The new SHERLOCK HOLMES, starring the talented Robert Downey, Jr., in the title role, may not become one of the most favorite Sherlock Holmes productions, but it is certainly very entertaining. And, although he doesn’t look the part, Downey does a great job of creating a likeable and still brainy, albeit more action oriented, Holmes. Best of all, this time Holmes is battling a truly evil villain using black magic to control the world. Thus, the movie has a very strong moral, biblical worldview, with some strong Christian values and references.

The movie opens with Sherlock Holmes and his faithful brave companion, Dr. John Watson (played by Jude Law), stopping the villainous Lord Blackwood from murdering his fifth female victim on a pagan altar. Blackwood is sentenced to be executed by hanging, but he warns Holmes from his jail cell that he is planning something that will challenge all of Sherlock’s beliefs in a rational world.

Blackwood is hanged, and Dr. Watson even pronounces him dead. Soon, however, Inspector Lestrade of Scotland Yard bursts into Holmes and Watson’s digs at 221B Baker Street to announce a report that Blackwood has risen from the grave.

Holmes and Watson rush to the gravesite, and, sure enough, the underground mausoleum has been torn open like Jesus Christ’s empty tomb in the Four Gospels. The body in the coffin, however, turns out to be a dead underground scientist that Irene Adler, the only person who ever beat Sherlock Holmes, asked Sherlock to find for her mysterious client.

Eventually, Holmes and Watson learn that the scientist was working for Blackwood. They also learn Blackwood is intent on some dastardly scheme against the British government and involving a secret international, mystical society similar to the Masons. Can Holmes and Watson stop Blackwood’s evil plan in time? And, what is Irene Adler’s mysterious client, who happens to be a professor, really after?

SHERLOCK HOLMES is a rousing, exciting, exuberant popcorn movie. Robert Downey, Jr., does a superb job in creating a different kind of Sherlock Holmes, while retaining the renowned deductive abilities of the world’s most famous detective. The rest of the cast is also excellent, including Jude Law as Dr. Watson, Rachel McAdams as Irene Adler, and Mark Strong as Lord Blackwood. Eddie Marsan is perfect as Inspector Lestrade. In fact, he’s given a nice character arc at the end that will bring a whoop of delight in Holmes aficionados, even if they don’t like this particular incarnation of Holmes and Watson.

Director Guy Ritchie does a surprisingly good job of handling a more family-friendly action movie designed for a broader audience. He usually does R-rated crime thrillers. Also, the script is rather tight and well paced, considering how long the movie is. The movie seldom lags.

SHERLOCK HOLMES contains a couple double entendres, a nasty and scary villain, and action violence that is sometimes strong and intense, so caution is warranted for older children. That said, it has a very strong moral worldview, with strong Christian values and content.

At one point, despite his rational methods, Holmes has a positive line of dialogue acknowledging a priest’s faith. Also, the movie shows that Christians are among the strongest opponents of Lord Blackwood, even though he deliberately has instilled fear into them and the rest of the public by posing as a demonic practitioner of the dark arts of black magic. In fact, the movie reveals that Lord Blackwood’s ultimate purpose is to rule the world with an iron fist, so he becomes a sort of demonic antichrist in the movie. In that sense, he is indeed a tool of the Devil. Of course, he eventually gets his just desserts.

Thus, with a bit of caution for younger viewers, MOVIEGUIDE® highly commends SHERLOCK HOLMES as one of the best, most entertaining, and positive movies of the year. Some Sherlock Holmes purists may be upset, but most fans and moviegoers probably will like it a lot.