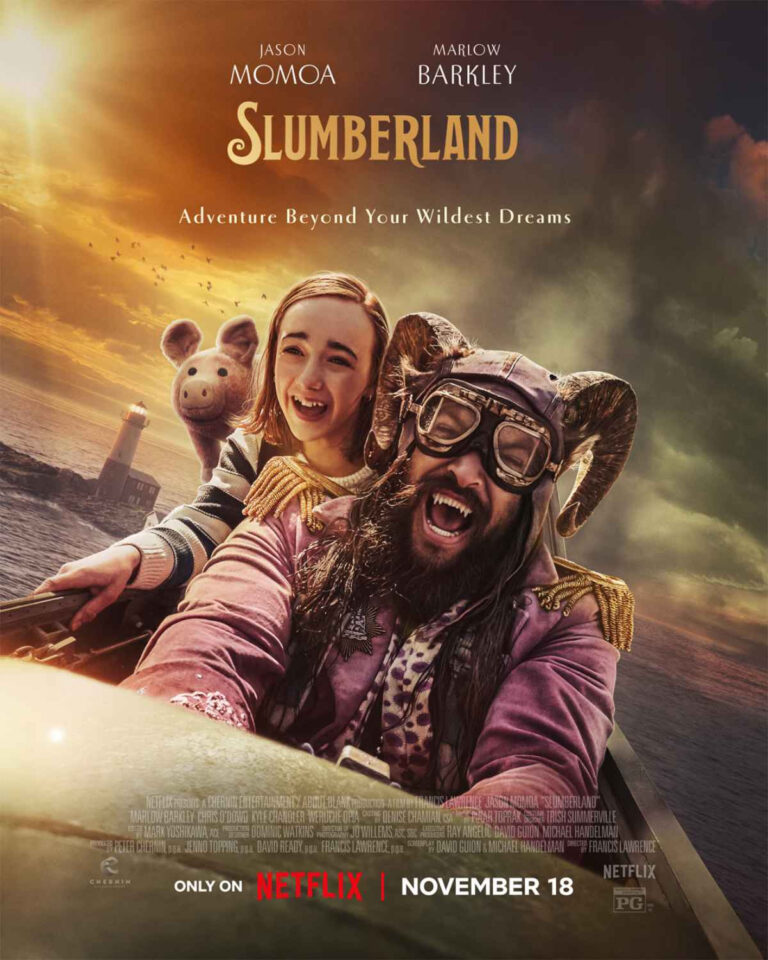 SLUMBERLAND is a fantasy adventure on Netflix. A young girl named Nemo moves from her lighthouse to live in the city with her uncle after her father’s apparent death. As Nemo tries to adjust to her new surroundings in the real world, she discovers a map to a dream world called Slumberland. While visiting Slumberland, Nemo meets Flip, a character her father mentioned in his bedtime stories. Nemo’s unsure if she can trust Flip, but he promises her the map leads to a secret treasure that would allow her to see her father again. Reluctantly, Nemo joins Flip to hunt for the treasure. Will Nemo see her father again?

SLUMBERLAND is a creative movie full of action, adventure and comedy. Nemo learns the importance of bravery and family during her journey. SLUMBERLAND deals with adult themes like grief, but it’s a creative, fun, upbeat adventure that celebrates sacrifice and fatherhood. It says that healing happens in the real world, not in a dream or fantasy world. SLUMBERLAND has some foul language and action peril. So, MOVIEGUIDE® advises caution for older children.

(BB, C, LL, V, A, M):
Dominant Worldview and Other Worldview Content/Elements:
Strong moral worldview with some redemptive elements champions sacrifice, repentance and the importance of fatherhood, with mild fantasy elements, but movie makes it clear that life is best lived in reality with family and that obsession with the dreamland is harmful
Foul Language:
Some obscenities (including a few uses of “d,” “h” and “a” words and one use of b**tard), one OMG and uses the term pig to describe officers
Violence:
No blood, but a man presumably dies after a sea monster drags him into the water, many sequences of action adventure and peril, Nemo’s nightmare is a giant, smoky, black octopus that could scare some younger viewers, a man is punched in the face
Sex:
No sex scenes, but there are a few minor jokes about puberty, and Flip says he has all he needs in “wine, women, and waffles”
Nudity:
No nudity
Alcohol Use:
No depicted alcohol use, but Flip mentions going to a bar to “forget who he is”
Smoking and/or Drug Use and Abuse:
No smoking or drugs; and,
Miscellaneous Immorality:
Flip steals and relishes being an outlaw, but he learns that sacrifice and family are more important that his material desires.

SLUMBERLAND is a fantasy adventure on Netflix about a girl named Nemo whose father is presumed dead, but she travels to a dream world called Slumberland with an old friend of her father’s, in hopes that she may see her father again. SLUMBERLAND is a creative movie full of action, adventure and comedy that extols family, sacrifice, courage, and fatherhood, but it has some foul language and minor jokes about puberty, so caution for older children is advised.

The movie follows a young girl named Nemo, who lives in a lighthouse with her father, Peter. Despite the solitude, Nemo loves her life, working on the lighthouse and spending time with her father. One of her favorite things is listening to her father tell stories of his past adventures with a fictional outlaw partner named Flip.

One night, her father receives a call about a boat in danger, and he rushes out into the stormy sea. That night, Nemo has a nightmare that mirrors the story her father told her before he left. When Nemo wakes up, the Coast Guard is at the lighthouse informing her of her father’s death.

Despite Nemo wanting to stay and run the lighthouse by herself, she goes to live with her uncle in the city. Her uncle struggles to connect with Nemo because he and his brother were estranged. Nemo is unsure of her new surroundings, but one night she dreams of the lighthouse. While she expects to see her father, she meets Flip, the man in her father’s stories.

Meanwhile, Flip is searching for a special map that leads to a secret treasure, a pearl that grants the finder any wish. Nemo is woken suddenly but uses her time away from school to search for the map.

Nemo discovers the map and enters the dream world again. Flip informs her that he and her dad used to use the map to traverse the dream world they called Slumberland. Nemo refuses to give Flip the map until he promises her that she can use the pearls to see her father again. Despite her distrust of the outlaw, she and Flip embark on a journey through other people’s dreams.

However, the road is treacherous as her nightmares and the Bureau of Subconscious Activities (BOSA), the agency that designs dreams for people in the real world, are hot on their tails. Will Nemo and Flip be able to work together to reach the pearls? Will Nemo be able to see her father again?

SLUMBERLAND is a creative movie that’s full of action, adventure and comedy. Nemo learns the importance of bravery and family as she journeys across Slumberland. While SLUMBERLAND deals with adult themes like grief, it is a creative, fun and upbeat adventure that celebrates sacrifice, fatherhood, repentance. It also says that healing happens in the real world, not stuck in a dream or fantasy world.

The visuals match the movie’s energy, but they sometimes are distracting. However, slowly but surely, the movie culminates in a strong moral theme about sacrifice, healing and family.

SLUMBERLAND has some foul language and action peril. There are also some minor jokes about puberty. So, MOVIEGUIDE ® advises caution for older children.