"The “Magic” of Science Prevails!" 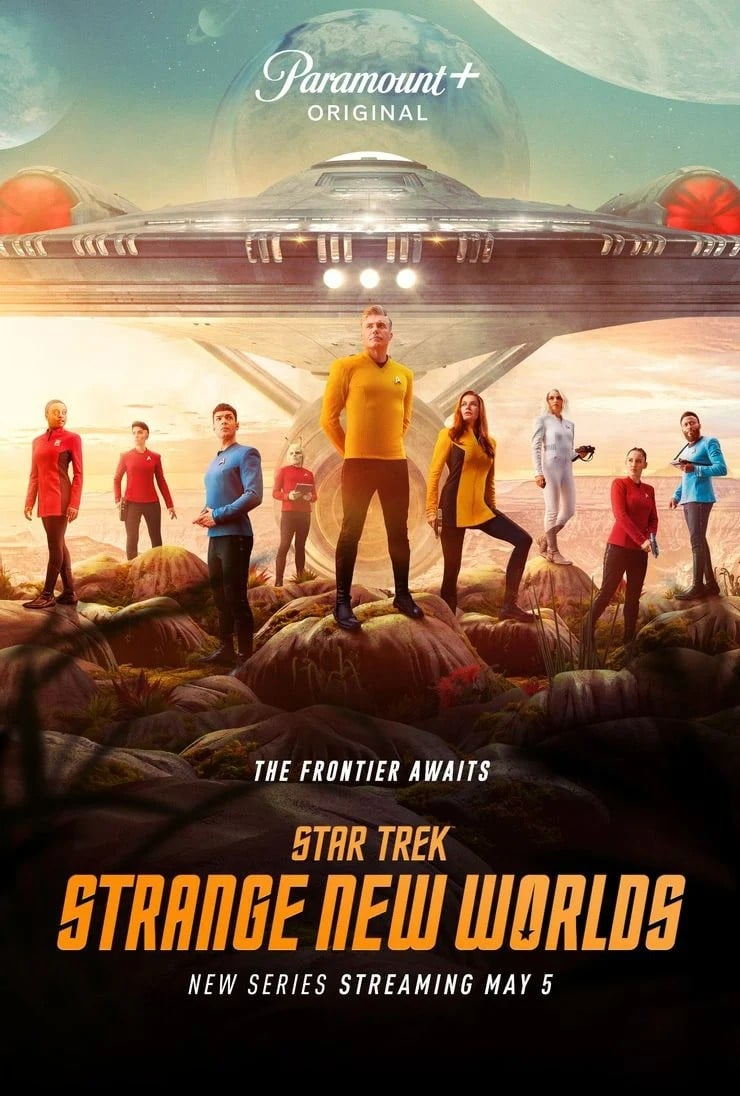 “The Elysian Kingdom,” the eighth episode of STAR TREK: STRANGE NEW WORLDS, has the Enterprise crew trapped inside a sentient nebula. Doctor M’Benga reads a bedtime story for his disease-ridden daughter. When he reports to the bridge, the crew members dress and act like characters from his daughter’s fantasy book. He discovers the nebula is responsible for brainwashing his friends. Doctor M’Benga plays along with the charade until he figures out how to undo the nebula’s effects.

“The Elysian Kingdom” has great humor but falls short on emotional gravitas. It harkens back to the “space anomaly of the week” formula used in the original series and its episodic heirs from the 1990s. The actors do a nice job playing exaggerated versions of themselves. The episode has brief, light foul language. The nebula, however, forces one female officer with a short, punk haircut to play a male adventurer. Also, the episode features brief, but bloodless, sword fighting. Finally, its emotional “climax” stumbles into soap opera melodrama. “The Elysian Kingdom” isn’t emotionally resonant, but it provides some good laughs. MOVIEGUIDE® advises caution for older children.

(BB, C, O, H, L, VV, N, M):
Dominant Worldview and Other Worldview Content/Elements:
A strong morally uplifting, redemptive worldview about a doctor being a good father to his ailing daughter, the doctor worries deeply about her wellbeing, he forces her to stay in a “buffer” chamber to slow down her uncurable disease, and, eventually, he accepts that she needs to find her own destiny, plus the crewmembers of a military, exploration spaceship are brainwashed to be characters in a medieval fairy tale where people believe in magic and demons, but the chief engineer those beliefs through his display of “science,” and uses a scientific device to circumvent some guards and transport people to another part of the spaceship, to proclaim at one point, “Once again, the power of science prevails!”
Foul Language:
Two “h” obscenities, one “d” obscenity, and no profanities
Violence:
Characters engage in bloodless medieval sword fights, character knocks out guards with her fists, an officer shoots arrows at the guards but the guards survive and retreat, captain briefly holds doctor hostage with a knife to his neck
Sex:
No sex
Nudity:
Two women display female cleavage in old-fashioned dresses
Alcohol Use:
No alcohol use
Smoking and/or Drug Use and Abuse:
No smoking or drugs;
Miscellaneous Immorality:
Science Officer Spock plays a spell caster and offers to guide the doctor to the mystical “Mercury Stone” but betrays the doctor for the evil Queen, and the captain, who plays a royal advisor, abandons the doctor due to cowardice.

“The Elysian Kingdom” episode of STAR TREK: STRANGE NEW WORLDS finds the Enterprise crew stuck in a nebula where an alien consciousness traps them in a fairy tale. “The Elysian Kingdom” has great humor and a strong moral worldview honoring the strong bonds between a father and his ailing daughter but falls short on emotional gravitas and promotes the “magic” of science and technology.

The episode begins with Doctor M’Benga reading “The Elysian Kingdom,” a children’s medieval fantasy book. M’Benga narrates the fairy tale to Rukiya, his daughter, who suffers from an incurable disease. The doctor keeps his daughter in suspended animation for long periods so that the disease won’t progress while he searches for a cure. Rukiya expresses her desire to change the book’s unsatisfying ending. The Doctor assures her that, when she grows up, she can write her own stories.

Back on the bridge, Captain Pike witnesses a nebula in front of the ship. Before the crew can react, the nebula engulfs the entire crew. M’Benga experiences the shock and reports to the bridge. When he arrives, the ship interior has transformed into the medieval kingdom from the book. His friends are brainwashed into playing characters from his daughter’s fantasy book. Captain Pike and his officers treat M’Benga as their royal king. M’Benga plays along with the charade until he figures out how to undo the mass brainwashing.

Throughout the episode, M’Benga meets exaggerated fairy-tale versions of the crew. The Doctor uses his knowledge of “The Elysian Kingdom” to wade through the constant “roleplay” obstacles. He meets up with Hemmer, the blind Andorian chief engineer who resisted the brainwashing. The two men deduce that the nebula is a sentient alien consciousness. The nebula read Rukiya’s mind and fulfilled her desire to change the Elysian book to her tastes.

Team M’Benga fights through more silly shenanigans worthy of a Dungeons and Dragons roleplaying contest. They battle the “Crimson Cards,” the evil Queen Neve (played by Cadet Uhura), and Spock being a spell caster. Cadet Ortegas acts as M’Benga’s bodyguard and shows off her supreme swordplay. Hemmer pretends to be a wizard and uses his tricorder device to transport Team Neve to the cargo bay. He even boasts about the “magic of science!”

Eventually, the plot problem is solved by a bittersweet solution where the doctor decides he must let his daughter take her own path to save her life.

“The Elysian Kingdom” is one of the weaker entries in STAR TREK: STRANGE NEW WORLDS. The comical interaction between the fantasy medieval and science fiction settings works extremely well due to the cast’s excellent acting. M’Benga provides the emotional weightlifting while Hemmer delivers the best Star Trek humor in a long time. Outside of the “roleplay” humor, however, the episode falls flat in the emotional department. For example, the reason behind the alien creature’s actions is flimsy at best. Also, the “farewell” scene between M’Benga and his daughter borders on pure saccharine. Their acting is good, but the scene is dragged down by melodramatic music and some shaky reasoning. “The Elysian Kingdom” is a disposable, yet welcome, addition to an excellent series.

The eighth episode of STRANGE NEW WORLDS continues the trends of fatherhood, science over magic, and trusting in children to make their own decisions. It features some of swordplay, fighting, brief but light foul language, and buxom female costumes but is otherwise in line with its TV-PG rating. “The Elysian Kingdom” isn’t emotionally resonant but it provides some good laughs. MOVIEGUIDE® advises caution for older children.