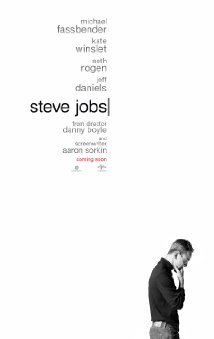 STEVE JOBS is a fictionalized drama dealing with the Apple Computer co-founder’s professional and personal life. The movie is built around backstage conflicts at three major media launches Jobs made before 2000. They include the Macintosh Computer launch in 1984, the 1988 launch of the NeXT computer after Apple’s board fired Jobs, and the iMac launch in 1998, which catapulted Apple into the financial stratosphere and made Steve Jobs an even bigger legend. The filmmakers take details from Steve’s professional, personal life and weave them into an intense, fictional backstage story in three acts. After a short prologue, STEVE JOBS is a bit too talky, with some complex dialogue that’s hard to follow at first. Once the characters begin to take focus, the drama starts to take off, however. It eventually becomes clear that, despite all the conflicts and arguments, it’s Steve’s loving, though rocky, relationship with his daughter that’s his truest and best inspiration. In effect, Steve Jobs is redeemed by his daughter’s love and admiration. This wonderful ending is regrettably marred by lots of strong foul language. So, extreme caution is advised for STEVE JOBS.

(C, BB, CapCap, LLL, V, A, MM) Light but powerful redemptive worldview, with some strong moral, capitalist elements ultimately as the flawed protagonist finds some measure of redemption through his creative vision, through his ability to drive people to do their best and through his growing love for his daughter as well her own love and admiration for him, with some positive biblical references and lots of discussion about decency versus indecency, plus forgiveness sometimes present; about 35 obscenities (including many “f” and “s” words), five strong profanities in a couple scenes and one light profanity; light violence when woman knocks papers off desk and man questions woman about a throwing object incident concerning their daughter; no sex but unmarried couple has a daughter out of wedlock; no nudity; brief alcohol use; no smoking or drugs; and, protagonist can be rude and demanding, protagonist threatens friend and employee about his job, protagonist is sometimes egotistical, and very creative protagonist, when someone complains about his poor treatment of people, he replies, “God sent His son on a suicide mission, but we still love Him [God] because he made trees,” but protagonist eventually admits he’s flawed and finds a measure of redemption.

STEVE JOBS is a fictionalized drama dealing with the Apple Computer co-founder’s professional and personal life from 1984 to 1998, the year when Apple Computers began its remarkable ascent to becoming the world’s most successful computer company. STEVE JOBS the movie has a lot of strong foul language and starts off too talky, so the dialogue is a bit complicated and hard to follow at first, but the drama and superb acting never lag. Even better, they lead to an emotionally powerful, uplifting ending focusing on the title character’s loving, though rocky, relationship with his daughter.

STEVE JOBS is built around three major media launches that Jobs made before 2000, the Macintosh Computer launch in 1984, the launch of the NeXT computer in 1988 after Apple’s board fired Jobs, and the iMac launch in 1998, which catapulted Apple into the financial stratosphere and made Steve Jobs an even bigger legend. The movie opens, however, with images of famous scientists, inventors and artists from the past, starting first with photos of Einstein. Then, in a promotional video for the movie 2001 based on one of his short stories, science author and novelist Arthur C. Clarke has been asked what the real year 2001 will be like. Amazingly, he talks about personal computers in every home. Homeowners will have all sorts of information at their fingertips, he says, and people will no longer have to be tied to big cities to work, but will be able to live anywhere they want and work from their homes!

Cut to Steve Jobs in 1984 at the media rollout for his new Apple computer, the Macintosh. Steve wants the computer’s voice software to say hello when he introduces the computer onstage, but the software has quit working and Apple computer expert Andy Hertzfeld says it can’t be fixed in time for Steve’s presentation. So, Steve is very upset. He tries to explain to Andy and his personal assistant and marketing head, Joanna Hoffman, why he NEEDS the computer to say, “Hello.” One thing he says is that he wants the computer to present a friendly voice to the world, to counteract the negative portrayals of computers that Hollywood presents, especially the Stanley Kubrick movie mentioned above, 2001. Joanna is skeptical, replying that the creepy computer in 2001 also said “Hello,” and it scared the heck out of her. Her comments, however, just frustrate Steve even more.

At the same time backstage, Steve’s Apple partner and co-founder, Steve Wozniak, asks Steve to acknowledge the team behind their successful compute, the Apple II. Even though the Apple II has paid the bills for seven years, Jobs believes the Apple II is part of the past. So, he turns down Wozniak’s request. Their argument reveals the huge gulf between the two men. Jobs wants to develop computers with closed systems like the Macintosh, which people can’t tinker with or customize. Wozniak, however, prefers computers with open systems like the Apple II, which are similar to the various stereo components customers can buy and fool around with to build the kind of audio system that THEY want, not the audio system that someone wants to force on them. Their argument carries into other parts of the movie, which focuses on three other rollouts and the backstage meetings Steve Jobs has before his famous presentations. At one point, Jobs complains that the person who said, “The customer is always right,” probably was a customer. Steve also argues with his CEO, John Scully, backstage about Steve’s extravagant but detailed vision for Apple computers, marketing and dealing with the board. John is like a father figure for Steve, but they come from different worlds, which leads to conflict. While these inside baseball arguments and confrontations are happening, Steve’s assistant, Joanna, wants Steve to meet with his ex-girlfriend, Chrisann Brennan, and their young daughter, Lisa. Steve lost a paternity suit Chrisann filed against him, but the judge only ordered him to pay a pittance to her, and Steve still claims Lisa is not his daughter. While he and Chrisann are arguing about all this, Steve tries to distract Lisa, and show Chrisann why his computer work is so much more important, by letting Lisa play with a Macintosh computer backstage. While her parents argue, Lisa manages to use Mac Paint on the computer to make an abstract drawing. Obviously, Steve realizes silently that Lisa’s just as brilliant as her father, and Steve decides to buy Chrisann and Lisa a house, and give them the kind of money Chrisann is asking him to give.

STEVE JOBS takes viewers backstage at the other two computer launches. The same supporting characters, and the same arguments, come into play, but with new details and insights. As a result, a complex depiction of Steve Jobs, his friends and co-workers, and Steve’s relationship with his daughter and her mother emerges. STEVE JOBS is meant to be a fictionalized account of the Apple Computer co-founder and visionary. Screenwriter Aaron Sorkin (THE WEST WING and THE SOCIAL NETWORK), Director Danny Boyle (SLUMDOG MILLIONAIRE), and Boyle’s team of actors and collaborating filmmakers take details from Steve’s professional and personal life and weave them into an intense, fictional backstage story in three acts.

The actors, led by Michael Fassbender in a brilliant performance as Steve Jobs, watched tapes of the real-life people, and even met some of them, to capture their spirit on film. After the short prologue, STEVE JOBS is a bit too talky, with some complex dialogue that’s hard to follow at first. Once the characters begin to take focus, the drama starts to take off, however. The movie’s first turning point, with Steve’s little daughter connecting emotionally with her father through his proud invention, the Macintosh Computer, is a brilliant device that Sorkin, the director and the actors masterfully carry through into the second product launch, which is effectively the movie’s second act, and finally to the third product launch, the movie’s third act, including its powerful climax and conclusion. In effect, Steve Jobs is redeemed by his daughter’s love and admiration. Just as brilliantly, and even more powerfully, it’s in this way that the movie finally reveals that a main part of Steve’s vision – computers and computer products for every child in the world – has also become a highly personal vision: computers and computer products for his own daughter, Lisa. This final vision is not just a commercial or capitalistic vision. It’s also a redemptive, benevolent and personal vision for the future and for his own beloved daughter. “I’m gonna put a thousand songs in your pocket,” he tells her at the movie’s climax. Happily,

STEVE JOBS doesn’t include any details about Steve’s attraction to Buddhism. In fact, the movie actually has some positive biblical references and allusions, including all its references to the spirit of Creation that God placed in the human heart. That said, at one point, when someone complains about Steve’s poor treatment of people, Steve replies, “God sent His son on a suicide mission, but we still love Him [God] because he made trees.” Of course, we also love God the Father (and His Son, Jesus Christ), because of the pain and sacrifice they experienced by delivering us from our sins through the pain and sacrifice of the Cross. Ultimately, then, STEVE JOBS is a redemptive movie with a redemptive worldview. That positive worldview is marred by plenty of foul language, including numerous “f” words. The filmmakers could have eliminated these “f” words, received a PG-13 (or even a PG rating), and made their movie more accessible to the broadest audience possible – families and their children and grandchildren. By doing so, they would have mimicked the vision that their portrayal of Steve Jobs tries to evoke – creating something for the next generation, our children and grandchildren. With such a beautiful ending, it’s really a shame the movie couldn’t have at least eliminated the stronger obscenities and profanities. Extreme caution is advised.