STOP! OR MY MOM WILL SHOOT 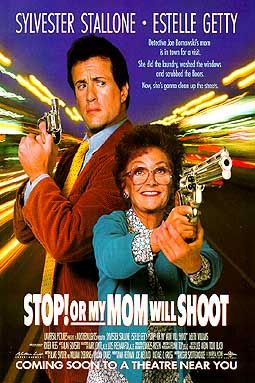 In STOP! OR MY MOM WILL SHOOT, Joey Bemowski is a hard-nosed Los Angeles police detective who unravels a crime with the help of his meddling mama, Tutti. The film's crass rejoinders and non-stop violence leads us to wonder if its makers have lost touch with reality. Audiences should realize that exposure to this type of "entertainment" may desensitize them as well.

In STOP! OR MY MOM WILL SHOOT, Joey Bemowski is a hard-nosed Los Angeles police detective who gets a visit from Tutti, his meddling mama from New Jersey. The story begins with Tutti helping her “little Joey” by cleaning his gun with soap and bleach. To make amends, Tutti buys another gun from bootleggers. Soon after, a car opens fire on the blackmarketeers. Five people are murdered, but Tutti walks away with a vivid picture of the incident in her mind. Brought before the police, Tutti acts as if she cannot remember the events. However, she tells Joey everything, hoping that he will solve the crime and be promoted. As a subplot, Tutti redirects Joey’s failing romance with Lt. Gwen Harper. Unable to talk about his feelings, Joey struggles to tell Gwen that he loves her. He is portrayed as an introverted yet lovable tough guy.

Regrettably, non-stop violence (including murders, assaults, shootings, and destruction of property) is treated as common fare or even humorous. The film is also unembarrassed about foul language, encouraging audiences to applaud Tutti’s crass rejoinders. Presented as comedy, STOP! OR MY MOM WILL SHOOT contains subtly offensive elements which desensitize audiences.