"A Celebration of Music, Life, Food, and a City" 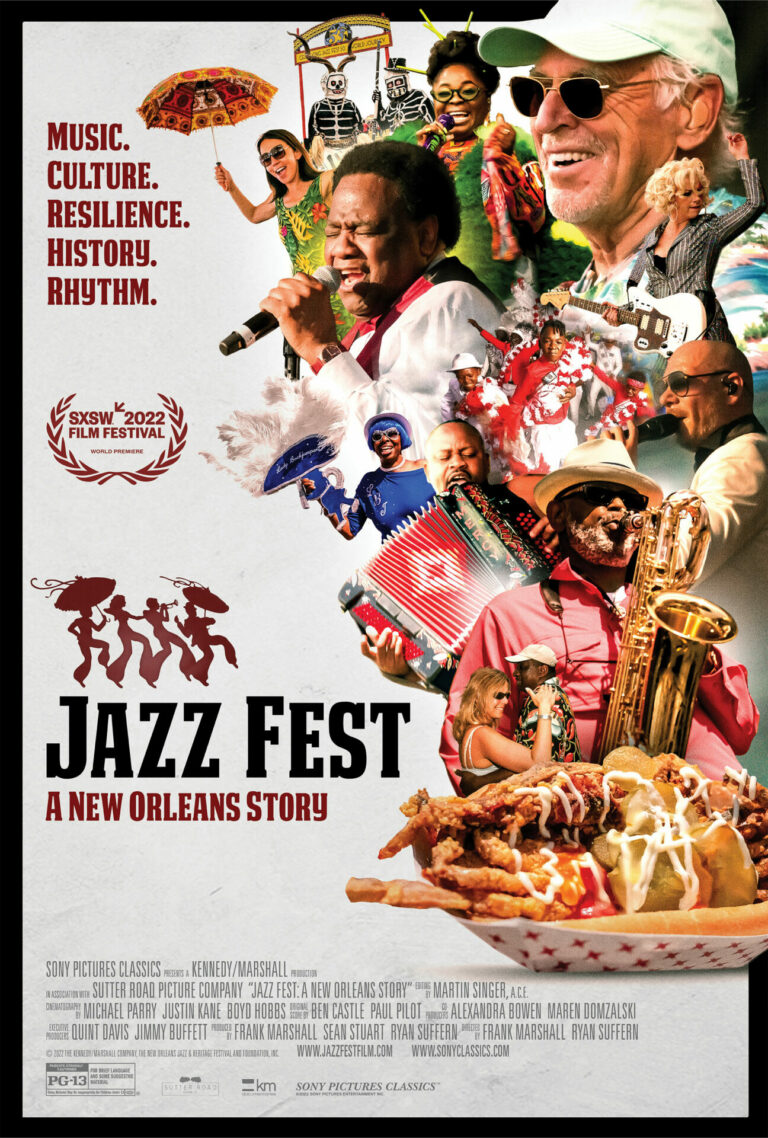 JAZZ FEST: A NEW ORLEANS STORY celebrates 50 years of the Jazz Music and Heritage Festival in New Orleans. The documentary seeks to educate viewers on everything related to jazz music. Several facets of jazz, R&B, soul, and rock music are explored, including their roots in African music and black gospel music. Many artists interviewed convey deep love for the music, and for New Orleans, where the festival originated. Although tough subjects like slavery and Hurricane Katrina are discussed, the documentary pays homage to the festival in a tasteful way.

JAZZ FEST: A NEW ORLEANS STORY is engaging and well-paced. It moves easily from musical performances to discussions of the festival’s historical, cultural and Christian roots. The documentary’s main point is moral, to show how the festival is a celebration of life, not just a celebration of New Orleans and its people. The movie has many positive, uplifting references to Christianity, God, Jesus, church, and even prayer. However, JAZZ FEST is marred by some pagan hedonism, brief foul language, brief innuendo, and a short interview with a transgender artist. So, MOVIEGUIDE® advises extreme caution.

(B, CC, Pa, PC, Ho, L, V, S, NN, A, DD, M):
Dominant Worldview and Other Worldview Content/Elements:
Light moral worldview in presenting the annual Jazz Music and Heritage Festival in New Orleans as a celebration of life, with strong overt, positive references to Christianity, Jesus, Grace, and church multiple times during the documentary, including a section about the Christian roots of jazz and R&B music where two or so gospel music songs are sung, including a rendition of “Oh Happy Day” about Jesus washing your sins away, plus the beginning shows Louis Armstrong playing “When the Saints Go Marching In,” and lyrics by Bruce Springsteen about praying to the Lord and rising up in his song “My City of Ruin” leads into a rendition toward the end of “Amazing Grace” by Aaron Neville and another man playing “When the Saints Go Marching In” on his horn, marred by some pagan attitudes favoring having a party and letting go and marred by a male musical artist wearing women’s clothes who briefly promotes homosexuality and transgender politics and who talks in a politically correct way about the festival embracing all kinds of lifestyles, no matter who “you love”
Foul Language:
Two “f” words, one kick-a** obscenity, one GD profanity, one OMG profanity
Violence:
Low level of violence including descriptions and brief newsreel footage of Hurricane Katrina and its devastation of New Orleans, and mentions of slavery and a mention of the Underground Railroad
Sex:
There are several innuendoes in a song by Pitbull, which includes some suggestive female dancers in skimpy bottoms, and there’s an interview with a man identifying as a woman,
Nudity:
Partial rear female nudity among several female dances, and some occasional images of shirtless men
Alcohol Use:
Occasional images of people drinking beer during a music, food and culture festival
Smoking and/or Drug Use and Abuse:
A woman is shown smoking in one image and there’s a reference to getting high at one point;
Miscellaneous Immorality:
Light miscellaneous immorality includes some promotion of rebellion, there are a few poor role models among the people featured in the documentary, and an artist sings, “You can’t always get what you want, but sometimes you just might find you get what you need.”

JAZZ FEST: A NEW ORLEANS STORY is a glimpse into the festival that has rocked New Orleans for 50 years. The movie shows Jazz Fest celebrating its 50th anniversary in 2019. Because of the COVID lockdowns, the fest was shut down for two years, but resumed in 2022. Pop artist Pitbull describes the festival as “magical,” and the documentary does its best to show that. The movie gives viewers a small taste of the culture of New Orleans, or the “world’s best backyard party,” as one artist fondly refers to it.

The jazz festival not only celebrates jazz music, it also celebrates other forms of music related ton jazz, including R&B music, soul music, Cajun music, and rock and roll. George Wein, founder of the Newport Jazz Festival, was asked in 1962 to create a similar festival in New Orleans, which is considered the birthplace of jazz. However, segregation laws prevented that from happening until 1969. New Orleans has a culture unique to itself, and the festival is a reflection of that culture. Wein enlisted the help of Quint Davis, who got Duke Ellington to play at the first festival. Both black men and women showed up to this festival, and the festival acclimated to the changing times.

The 2019 fest celebrated bands like Earth, Wind and Fire, artists like Herbie Hancock and Jimmy Buffet, and lesser known artists like Allan and Ben Jaffe. Ben says he grew up on jazz (he was born in 1971). The 2019 fest also featured bands like the High Steppers Jazz Band and the Jackson Square Allstar Brass Band. Gregory Porter describes the nuances of tone and delivery of the music as unique to the culture of the festival.

The movie features The Ellis Marsalis Band is featured, a family band consisting of a father and four of his six sons, who grew up playing jazz as a family. Interviews like this give the documentary a cozy, family feeling. Two of the sons discuss meeting jazz greats like the late Miles Davis and James Booker.

The syncopation of rhythm in jazz is also discussed. African in origin, syncopation was sometimes used at a person’s funeral. All artists from various genres would come pay tribute to the loved ones with honor and use the music to celebrate their lives. “Death and jazz go hand in hand,” says one artist.

People also discuss the spiritual element to the music. They say jazz has roots in worship and the church, which is where the rhythms of Negro spirituals, jazz and gospel music originated. People in New Orleans used jazz music and other related forms of music to celebrate both a baby being born as well as someone passing. Jazz music is described as a sacred kind of music having its own language which listeners, knowledgeable of the culture, can easily interpret.

JAZZ FEST has a positive Christian section celebrating the gospel roots of jazz. Although people use words like “magical” to describe the gospel tent at the festival, the artists discuss such things as redemption and forgiveness. The section features the Rev. Al Green, the New Orleans Gospel Soul Children and other artists. Pop star Katie Perry, one of the current judges for ABC-TV’s AMERICAN IDOL, uses the choir to segue from a lovely rendition of “Oh Happy Day” into her modern hit “Firework.” Later in the movie, sone lyrics by Bruce Springsteen about praying to the Lord and “rising up” in his song “My City of Ruin” leads to Aaron Neville singing “Amazing Grace,” and a man playing “When the Saints Go Marching In” on a horn. An early scene in the movie showed an old clip of Louis Armstrong playing the same tune.

While jazz may not appeal to every audience, JAZZ FEST features other kinds of music related to jazz, including soul music, R&B, Cajun music, and rock and roll. Also, the documentary’s use of vintage footage as well as current interviews with the founders and artists who played there, reflects New Orleans history and culture. The culture is colorful, bright and unique, so the movie is also colorful, bright and unique. The movie is engaging and well-paced as it moves easily from featuring musical performances to discussion of the fest’s spiritual, historical and cultural roots as well as how much the fest has evolved over the years. One of the movie’s best features is its cinematography and camerawork, which is varied and unique.

The main point of the documentary is moral. At the end, for example, the movie concludes that the Jazz Fest is a celebration of life. This overall moral worldview is supported by the movie’s overt references to Christianity, God, Jesus, Grace, church, prayer, and gospel music. One clip shows a young Rev. Al Green, the popular soul singer, singing about Jesus and “the blood of the lamb” in his church. The song “Oh Happy Day” in the movie celebrates Jesus washing our sins away. Also, one woman says that the gospel music at the festival promotes forgiveness, redemption and joy. There are more than 7000 musicians and singers at the festival, and more than 1,000 of those are gospel singers. Also, Katy Perry mentions singing in her church when she was a child.

However, JAZZ FEST is marred by a few pagan attitudes about partying. There are also some innuendoes during a song performed by Pitbull. His performance includes two “f” words and several dancers making light suggestive movements. The dancers also wear skimpy shorts, and two or three of the women shows partial rear nudity. Finally, JAZZ FEST has one GD profanity and a short interview with a man dressed as a woman who talks about the festival accepting people who openly embrace LGBT lifestyles.

So, despite the movie’s positive content, MOVIEGUIDE® advises extreme caution for JAZZ FEST.