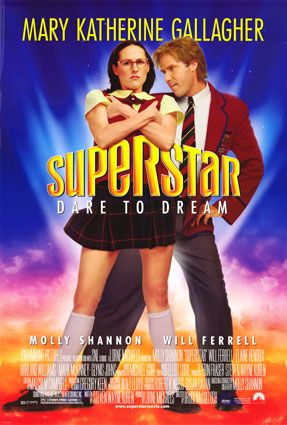 SUPERSTAR is a shallow, silly comedy set in a Catholic high school. A socially maladjusted girl dreams of being kissed and tries to make herself desirable by becoming a "superstar." The movie contains some moral elements and treats Christianity in a mixed way, but is rife with vulgarity and stupidity.

It isn’t easy to stretch a three-minute skit into a 90-minute comedy. TV’s SATURDAY NIGHT LIVE demonstrates this fact of life once again in the eminently forgettable SUPERSTAR.

SNL comedienne Molly Shannon brings her klutzy parochial schoolgirl character, Mary Katherine Gallagher, to the big screen, for a lighthearted portrayal of the romantic fantasies of a high-school outcast. Her modest ambition is to enjoy a passionate kiss, but she fears no boy will want to kiss her until she becomes accomplished and desirable, until she becomes, as she breathlessly puts it, “A Supersstar!!!”

Unhappily for Mary Katherine Gallagher, the object of her affection is already taken by someone else. Football hero and campus heartthrob Sky Corrigan, played by SNL’s Will Ferrell, is dating the most popular girl in school, the beautiful but conniving cheerleader, Evian (Elaine Hendrix). The story bounces back and forth between Mary’s ongoing rivalry with Evian and her efforts to become somebody by competing in the “Let’s Fight VD Talent Contest.”

Pratfalls, catfights and flashing panties abound in this movie. Mary Katherine displays a penchant for ferociously French kissing trees and stop signs in preparation for The Big Kiss. SUPERSTAR has little outright strong cursing, but it is burdened by an overabundance of vicious insults and sophomoric, vulgar sight gags. It lacks originality and humor.

SUPERSTAR’S portrayal of religion is surprisingly benign for a spoof set in a Catholic high school. The priest is generally a little wacky, but so is everyone else. The nuns are a gaggle of frigid robots. However, Mary Katherine prays earnestly, though sometimes inappropriately. She even confesses the sin of selfishness at the end, and her prayers are answered by a personal God. In contrast, Evian loses Sky because of her selfishness and cruelty. Meanwhile, Mary Katherine’s grandmother eventually encourages her to use the gifts that God gave her. Finally, SUPERSTAR’S laid-back Jesus, who appears in a spectacular vision that is explained away by pop psychobabble, is not biblically accurate, but he is compassionate and kind, and actively working for Mary Katherine’s well-being.

In the end, Mary Katherine becomes a star and gets her man, courtesy of the Lord, but not the one she expects. If only the filmmakers had done it all in three minutes….