"Learning to Forgive and Get Along" 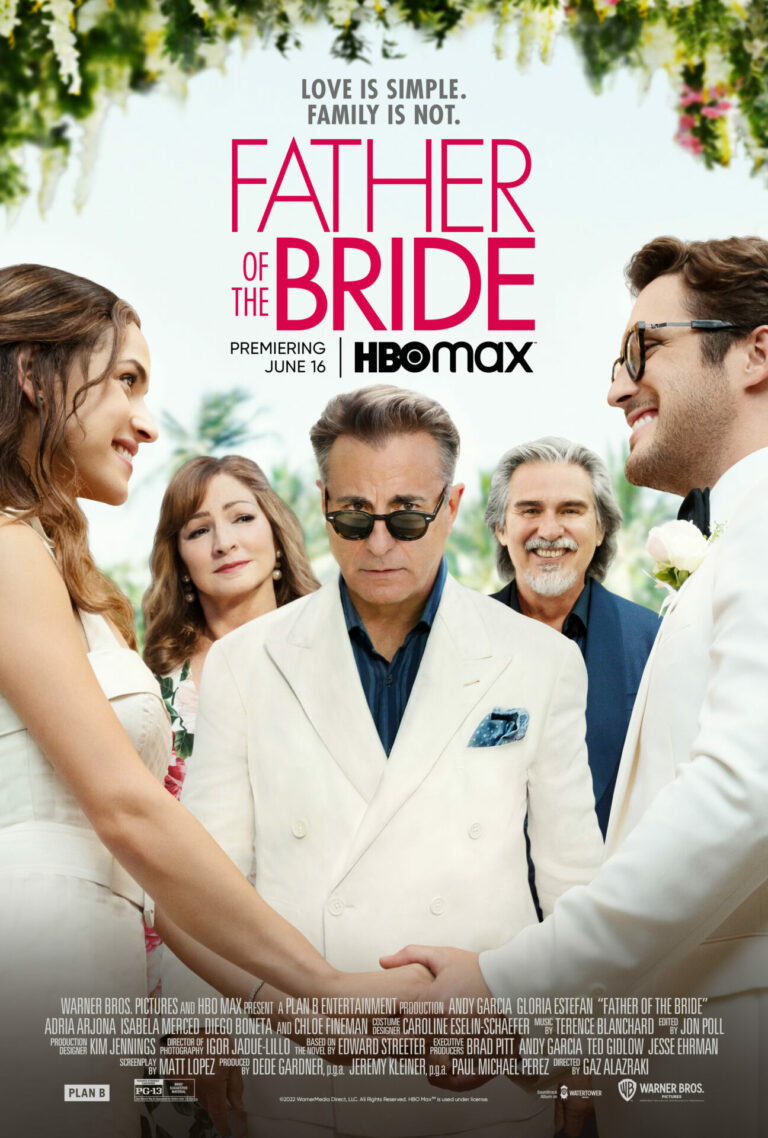 FATHER OF THE BRIDE is a Hispanic update of two popular movies. Billy and Ingrid Herrera are having marital problems and seeing a marriage counselor. However, when their daughter, Sofia, comes home and tells them she’s engaged, their whole focus shifts to the anticipation of the wedding. It’s not long afterward that Billy thinks of some unwarranted objectionable things about Sofia’s fiancé, Adan. For example, he’s too kind, his family is too rich, etc. Will Billy be able to get along with Adan and accept the marriage? Will Billy get along with Adan’s father?

Streaming on HBO Max, FATHER OF THE BRIDE is an entertaining remake that spins the story with the dynamics of a Latino family. Andy Garcia, who plays Billy, does a great job with his character and is very believable as Sophia’s immigrant father. The movie has a mixed worldview, however. For example, the characters argue between having a New Age wedding versus a traditional Catholic wedding. Eventually, the New Age wedding doesn’t take place. Also, this FATHER OF THE BRIDE extols family, forgiveness and learning to love other people.

(Pa, C, B, FR, Ho, LL, S, N, AA, D, M):
Dominant Worldview and Other Worldview Content/Elements:
Light mixed worldview with mentions of church, a Catholic priest, God, and traditional morality, mixed with false theological New Age mentions of meditation, yoga, Zen , but not shown (the young couple in the movie want a New Age wedding, but their parents don’t), plus an implied same-sex attraction occurs
Foul Language:
Five obscenities, six profanities
Violence:
No violence
Sex:
There’s an implied same sex attraction in one part of the story, there are mentions and implications of an engaged couple sleeping together before marriage, and woman leads man into a room, but nothing happens
Nudity:
Go-Go dancers appear in lingerie, with partial rear female nudity
Alcohol Use:
Some drinking and implied drunkenness
Smoking and/or Drug Use and Abuse:
Smoking of cigars, but no drugs; and,
Miscellaneous Immorality:
Keeping the truth from others occurs.

In FATHER OF THE BRIDE, an Hispanic update, streaming on HBO Max, of two famous movies, a married couple is having marital problems, but one of their daughters comes home and tells them she’s engaged, their whole focus shifts to the anticipation of the wedding. FATHER OF THE BRIDE is an entertaining remake, but it has a mixed worldview with some references to Christianity and traditional morality as well as some false New Age religion and other objectionable content, yet it ultimately extols family, forgiveness and learning to love other people.

When the movie opens, Billy and Ingrid Herrera have been going to marriage counseling for over a year now, and Ingrid has come to the conclusion she would like a divorce. Billy is completely distraught, but Ingrid says they must tell their children the news as soon as they’re all together. That night, their daughters, Cora and Sofia, are home, but Sofia reveals she’s engaged. Feeling like they don’t want to talk about the divorce at such a happy moment, Billy and Ingrid postpone that discussion.

Sofia’s fiancé, Adan, comes to meet the family. At first, Billy says he gives the blessing to Adan to marry Sofia, but it’s not long before he comes up with some objections. Adan and Sofia are going to move to Mexico to work at a nonprofit, so Billy’s concerned about their financial status. When Adan’s family comes to visit, Billy finds out his father is a multi-millionaire who tries to dictate the wedding plans for Adan and Sofia.

FATHER OF THE BRIDE is an entertaining movie that has a different feel then the original movies. The father figure has worked hard, after leaving Cuba with nothing and building a beautiful home and successful business. Andy Garcia, who plays Billy, does a great job with his character and is very believable as the immigrant father. The entire movie is entertaining, though not as funny as the 1990’s version. The movie still delivers as an entertainment, however.

FATHER OF THE BRIDE has a mixed worldview. For example, it has some moral elements of a loving positive family portrayal. The characters that are getting married have decided not to have a big Catholic wedding, like their father would like, but want a New Age “zen yoga” instructor to perform their wedding. This ultimately isn’t fulfilled, however, but the joke is that they have moved pass their Catholic, Christian upbringing. Andy Garcia’s character is fighting for the traditions of their culture, including moral traditions, but the younger generation would like to veer from that. His character also must fight for his marriage and focus on the family more than his work.