THE HALF OF IT 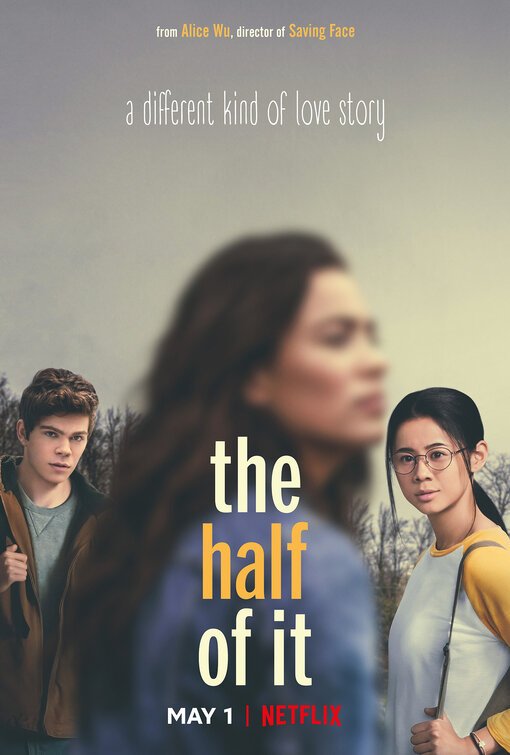 THE HALF OF IT has a strong romantic worldview as love is at the center. However, it includes many Christian elements such as church services, mentions of prayer, a Christian hymn, and the main meeting place for the two leads at first is a church. But, sadly, homosexual elements and learning about ones sexuality is at the forefront. That, along with foul language, pagan references to Greek Gods, and a comment refuting scripture, merits extreme caution for THE HALF OF IT.

(RoRo, CC, HoHo, B, Pa, ABAB, LL, V, N, A, MMM):
Dominant Worldview and Other Worldview Content/Elements:
Strong romantic worldview where characters romanticize love and what it should be like. Strong Christian worldview as Catholic church services are held where sermons are heard, and Christian hymn is sang. Easter Sunday is mentioned, prayer is mentioned, main characters usually meet at the church to discuss the love letters, and a youth group trip is mentioned. Strong homosexual worldview as two girls kiss. One of the girls thinks she’s in love with the other, while the other girl reveals that she did think about the other girl in a romantic way, although they don’t really act on their feelings other than a goodbye kiss. Moral elements such as family and friendship are extolled. Pagan elements like Greek Gods mentioned and philosophical quotes shown on screen. Anti-biblical comments like telling someone they are going to hell for being a homosexual and refuting scripture
Foul Language:
12 obscenities, 2 profanities, some name-calling, one instance of vomiting
Violence:
Tackling during football game, girl slaps guy in face
Sex:
Girls kiss once, two couples seen kissing three times, a cheek kiss
Nudity:
Girl gets undressed to swim in hot spring, girls seen in their underwear in the hot spring, woman on television show seen taking shirt off and back is shown
Alcohol Use:
Underage drinking at a party, but no drunkenness
Smoking and/or Drug Use and Abuse:
None; and,
Miscellaneous Immorality:
Plot centers on lying, racism, bullying and some gossiping.

THE HALF OF IT opens with a reference to Greek Gods and how they believed a person was really two people that were torn apart and spend their life looking for their other half. Then we meet Ellie. A Chinese American straight A student who spends her time writing papers for her peers for money.

One day the school jock, Paul, asks Ellie for help writing a love letter to a girl named Aster. Aster is the daughter of the towns Catholic priest and dates the popular guy at school, Trig whom everyone believes she will marry. Aster gets the first love letter from Ellie and Paul and immediately is drawn in by the romantic literary language that Ellie uses.

Ellie and Aster continue to go back and forth writing letters. Ellie and Paul meet regularly to talk about the contents of the letters in the towns church. The letters are deep and very artistic. They talk about the world, love and Aster’s art, as she used to paint. They even go as far as painting a mural on the side of a building as each makes a move after the other. All the while Ellie and Paul form an unlikely friendship. The letter writing and drawing goes on for a while until Paul is ready to text Aster and ask her on a date.

Aster accepts, and her and Paul meet at the diner for dinner. Paul struggles to make conversation with her as he’s never really talked to her. All he knows is what Ellie teaches them from their conversations. Aster makes it clear to Paul that she just wants to be friends, and he accepts that. But, their messaging and letter writing continued, and Ellie falls for Aster just as hard as Paul does.

One day, when Ellie ends up at Paul’s house without Paul, Aster shows up to give him something. Ellie and Aster end up spending the day together at a hot spring and get to know each other more, even though Ellie knows more about Aster than she thinks.

As Paul spends more time with Ellie, it seems he begins to fall for her in a romantic way. When he decides to make a move, Ellie shuts him down and he realizes Ellie’s in love with Aster. This could mark the end of their friendship.

THE HALF OF IT has a good script written in a way that really romanticizes love, which is also a bad thing. The friendship between the two main characters is sweet as they both really care about one another and their families. However, sometimes the movie is slow and boring because it has an artsy edge to it.

THE HALF OF IT has a strong romantic worldview as love is at the center. However, it includes many Christian elements such as church services, mentions of prayer, a Christian hymn, and the main meeting place for the two leads at first is a church. But, sadly, homosexual elements and learning about ones sexuality is at the forefront. That, along with foul language, pagan references to Greek Gods, and a comment refuting scripture, merits extreme caution for THE HALF OF IT.