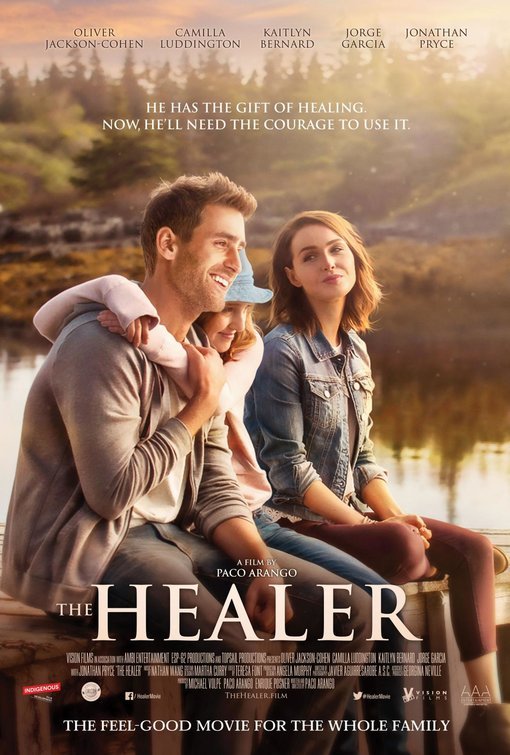 THE HEALER follows an electrician named Alec Bailey, whose life is spiraling out of control because of bad personal decisions and lots of debt. Alec’s uncle, Raymond, says he’ll settle his debts, but only if he spends the next year at Raymond’s house in a small town in Canada. When Alec arrives, he finds he has the gift of healing others, Eventually, Alec must decide if he wants to keep this supernatural gift or lose it forever.

Despite some good acting from a fairly unknown cast, THE HEALER is a predictable, somewhat confusing, movie that doesn’t know what it wants to be. It has a strong Christian worldview. For example, scenes take place in a church, and priest returns to God after losing his faith, and the Bible, prayer and Heaven are mentioned. However, this Christian content is marred by some New Age concepts, lots of unnecessary foul language, some sexual references, a character who lies about being a lesbian homosexual, and other immoral behavior. Consequently, MOVIEGUIDE® advises extreme caution for THE HEALER, which is available on Amazon Prime and other places.

(CC, Pa, B, Ho, LLL, V, S, N, MM):
Dominant Worldview and Other Worldview Content/Elements:
Mostly Christian worldview where scenes take place in church, a priest comes back to God after not believing, the Bible, prayer and Heaven are all mentioned, a family talks about how a gift of healing could be from God, friends and loving animals are extolled, two men make amends after having some issues with one another, marred by some New Age elements where a healing gift could also be magical, plus some homosexual elements when a woman says she’s a lesbian, but it turns put she’s lying
Foul Language:
At least 26 obscenities (mostly “h” words, “s” words and “d” words), 14 profanities (mostly OMG), some light name calling, characters seen cleaning up feces from animal barn
Violence:
Man slams another man’s head on a bar and chases another character, cow gives birth, and audience sees everything, gun seen and shot once, man has a heart attack and is perceived dead but isn’t, and a character chokes on chips while eating
Sex:
Light sexual references include a comment is made about a character known for sleeping around, unmarried couple sleeps in bed together, couples kiss, and a woman lies about being a lesbian
Nudity:
Upper male nudity in the shower and character steps out wearing a towel
Alcohol Use:
Some alcohol use and one instance of drunkenness
Smoking and/or Drug Use and Abuse:
No smoking or drugs; and,
Miscellaneous Immorality:
Lying from multiple characters but the lies are resolved in the end, deceit, jealously, gambling habit, dysfunctional family portrayal but it’s resolved in the end, a character claims he’s Buddhist, but he’s just trying to fool a priest.

In THE HEALER, Alec Bailey is having a rough go of it. Alec’s life is starting to spiral out of control. He’s making bad personal decisions and has a lot of debt, with his electrical business not bringing in much money. This debt is mostly owed to Russian mobsters, although Alec also has a gambling problem.

Alec finds himself in a place he might not be able to get out of when he goes to the bank to hear that a long-lost uncle, Raymond Heacock, wants to meet him. Alec meets Raymond at the restaurant and learns that Raymond wants to settle Alec’s debt for him. However, the catch is that Alec must move to Raymond’s house in Lunenburg, Canada for one year.

Alec accepts Raymond’s proposal, but only after almost getting beaten up by the mobsters who want their money.

Cut to Canada. Alec arrives and soon meets Cecilia, the town veterinarian. Sparks seem to be in the air, but Cecilia tells Alec she’s a lesbian. Once Alec believes Cecilia won’t date him, a beautiful friendship begins to blossom.

Alec asks Cecilia to put an ad in the town paper, because he’s an electrician in need of work. Alec’s business back home was called The Healer, so he uses the same name for the ad. The next morning Alec’s living room is full of people he doesn’t know asking to be healed. Alec is confused and learns his ad was misprinted to say he could heal anyone, instead of healing electrical needs.

The townspeople are saddened to learn he can’t heal their medical problems, but they seem to understand. However, the following day Alec heads to town and learns that all the people at his uncle’s home the previous day had been healed. Alec doesn’t know why this happened and instead heads out to Cecilia’s home to work for her vet business.

At Alec’s house the next day, the local priest arrives and unexpectedly has a heart attack. Two young girls catch what happened on tape and show it to the police. The video makes it look like Alec killed the priest, and an officer arrests Alec. However, what the police didn’t see was the priest come alive as Alec is taking him into town to the hospital.

When Raymond arrives after Alec is let out of jail, he and Cecilia tell Alec about his gift of healing others. The gift is activated on his 30th birthday, which is that same day, and has to be accepted by him by midnight, or it will be gone forever. Alec declines the gift, but the next day a young girl named Abigail comes to town with terminal cancer that changes Alec’s outlook on life.

THE HEALER is a predictable, somewhat confusing, movie that doesn’t always know what it wants to be. Instead of picking a distinct audience, the movie tries to appeal to all audiences, which adds to the confusion. The acting is good at times but is occasionally sometimes drowned out by the Disneyesque fairytale score that doesn’t seem to go with the story.

THE HEALER has a convoluted worldview. The worldview seems mostly Christian. Thus, scenes take place in a church, the Bible, prayer and Heaven are mentioned, and a priest comes back to God after not believing. The movie wants the audience to believe that God gave the main character the gift of healing, but it also implies that the gift he receives could be magical in some way. There’s also a homosexual storyline that doesn’t come to fruition and seems like it’s placed in the story just for good measure. So, MOVIEGUIDE® advises extreme caution.