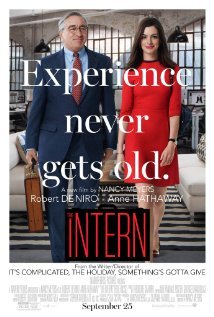 In THE INTERN, 70-year-old widower Ben Whitaker decides to give up his unfulfilling retirement life and return to the workforce as an intern in a senior internship program at an online fashion retailer. His old-fashioned ways are inspiring to the young twentysomethings, but when he’s assigned to the company’s founder, Jules, she insists she doesn’t need him. Though she ignores him at first, Ben’s initiative around the office catches her eye. Jules soon finds herself seeking his father-like wisdom on matters of work and love.

It’s hard not to walk away from THE INTERN a little disappointed. What starts out as a lighthearted, feel-good comedy turns into something else when Ben gets involved in the personal melodrama of his boss. THE INTERN has a moral worldview with some slight feminist comments. One of the characters changes everyone around him with his positive attitude. He constantly is doing the right thing no matter what the consequence and influences those around him to do the same. THE INTERN has a fair amount of foul language and some innuendo. So, MOVIEGUIDE® advises strong caution.

(BB, Fe, BB, C, Pa, LLL, S, AA, M) moral worldview, character emphasizes doing the right thing no matter what, slight feminist elements, husband is unhappy in his role as just a caregiver but changes, thoughtfulness and care for others is a major part of the story, a man gives up his privacy and lets someone who needs a place to live come stay with him, characters are held accountable for some wrongdoings, repent and offer apologies, relationships are mended and repercussions of an affair are shown, character is doing some new age exercise; about 27 obscenities and profanities, including two “f” words, the middle finger gesture is shown, and woman vomits; no violence; light or implied sexual content includes husband has an affair and hides it from his wife but then tells her and repercussions of an affair shown, a masseuse purposefully massages a man’s butt as a flirting device, a man puts a newspaper over his groin to hide any signs of arousal, someone mistakes a massage as a sexual act being performed, it’s implied a couple sleeps together outside of marriage; no nudity; a driver drinks from a flask before he’s supposed to drive someone somewhere but is found out and confronted, drunkenness; no smoking or drugs; a woman talks about her divorce, a woman and her mother have a dysfunctional relationship, positive portrayal of marriage, and a group of men break into a woman’s house and delete an email from her computer.

THE INTERN stars Anne Hathaway as the successful, married owner of a new fashion retailer, who hires a 70-year-old retired, widowed manufacturing executive, played by Robert DeNiro. The INTERN has a moral worldview, where one character changes the others to show that doing the right thing, no matter what the consequences, should always be done, though there are some cautionary elements.

In THE INTERN, Jules Ostin, founder of online fashion retailer About the Fit, watches over her startup with the care of a mother over a newborn baby. Although she has over 200 employees, she still finds it hard to let the brilliant people she’s hired take over many of the responsibilities she insists on micromanaging. So when it’s announced to her that she’s getting an intern via the new senior internship program to assist her, she immediately tries to beg off, but is stuck with the prospect when her right-hand man, Cameron, reminds her she’s must set a good example for the company.

Ben Whitaker, a 70-year-old widower in retirement, is getting antsy, unable to find fulfillment in any of his hobbies. He spent forty years working as an executive at a phonebook manufacturing company, an extinct necessity of life that’s awfully metaphoric for his own current state of affairs. While out shopping one day, he notices a flyer for the internship program at About the Fit and decides to apply. His knowledge, experience, and easygoing personality win over the young executives and leave a powerful impression on his fellow twentysomething interns.

Ben’s assigned to Jules to be her personal assistant and is told that she probably won’t need him much. Day after day, he sits at his desk waiting for an assignment from his new boss and dutifully mans his station while doling out wisdom to his colleagues on everything from love to old-school fashion. His initiative with some small tasks soon catches the eye of Jules, and she begins to warm up to him. As he gradually becomes part of her world, he learns the company is planning to hire a CEO and take away some of her responsibilities. This devastates her to think of someone else running her company. Ben’s strength and support of Jules elevate him to near father figure status.

All of the hip, young, tech culture doesn’t seem to faze Ben, though he can’t quite understand how to set up his new Facebook profile. Unexpectedly, he finds new love from the company masseuse, Fiona, and the pair begins a quiet and slow romance behind the scenes.

THE INTERN has some slightly cheesy elements, but overall well done. Though what starts out as a lighthearted, feel-good comedy turns into something else completely as hour number two arrives. At first, the story focuses on Ben as he ventures into uncharted territory with habits of his old-fashioned professional etiquette still entrenched in every detail of his life. It’s charming and endearing to say the least, and it sets up the expectation that this will be a story about a generation gap being bridged as old and young find the value in each other.

Then, however, Jules and her tale of stoic leadership takes center stage, and all the momentum shifts dramatically to her, completely changing the story’s focus. This is unfortunate, as Ben’s much more likable, and his story more interesting, than Jules’ personal melodrama about finding a balance between work, marital bliss and family life.

THE INTERN has a moral worldview, some slight feminist comments. One of the main characters helps the others around him become better people by showing a good example of always doing the right thing. Caring for others is also a major part of the story. Also, characters are held accountable for some wrongdoings and offer apologies, but others don’t. THE INTERN also has a significant amount of foul language, innuendo and a scene of drunkenness. Strong or extreme caution is advised.