THE NATURE OF ROMANCE

"Finding the Trail Back to You" 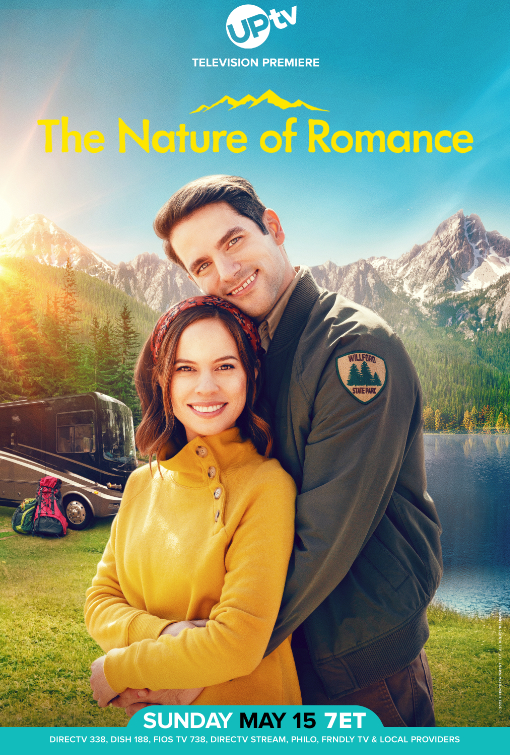 THE NATURE OF ROMANCE is a light drama airing on UPtv. The story follows a travel writer, Jackie, who goes camping at a state park with her best friend, Annette. Everything goes wrong, however, and Jackie finds herself alone on the trip waiting for an RV repairman. Meanwhile, Sean Davis, the park’s lead ranger, searches for a way to get money to renovate the Nature Center. When Sean finds out Jackie’s a travel writer, he wonders if she can write a piece that can bring more tourists to the park. Along the way, romance blossoms between them.

THE NATURE OF ROMANCE is well acted and tells a sweet, appealing story. However, it has a strong Romantic worldview with light moral and environmentalist elements. A character talks about following her dreams and focusing on the positive. There’s also an underlying themes about finding the right romantic partner. Despite that, THE NATURE OF ROMANCE has some moral elements stressing friendship, kindness and honoring one’s mother. Light environmentalist elements come into play where the park ranger wants people to preserve and respect wildlife habitats.

(RoRo, B, E, A, M):
Dominant Worldview and Other Worldview Content/Elements:
Strong Romantic worldview with light moral and environmentalist elements, including character says her parents encouraged her to follow her dreams, focusing on the positive, a comment is made about fortune favoring the bold, there are underlying themes of finding the right romantic partner and the beauty of nature, movie extols friendship and making kind gestures for people you care about, plus some light environmentalist elements come into play as a character wants others to preserve and respect nature, but it’s not a radical political statement.
Foul Language:
No foul language
Violence:
No violence, but woman almost throws a rock at her front door after locking herself out, but doesn’t
Sex:
No sex scenes or sexual immorality (a heterosexual couple kisses)
Nudity:
No explicit nudity, but a woman appears in a towel, and there’s implied full nudity when she showers
Alcohol Use:
Some social drinking
Smoking and/or Drug Use and Abuse:
No smoking or drugs; and,
Miscellaneous Immorality:
Light sarcasm.

THE NATURE OF ROMANCE is a light drama on UPtv about a travel writer who becomes stuck in an RV at a small national park but becomes attracted to the park ranger who’s looking for public support for renovating the park’s Nature Center. THE NATURE OF ROMANCE is well acted and tells a sweet story promoting friendship, kindness and honoring one’s mother, but it also focuses on finding the right romantic partner and following your dreams.

Jackie Sinclair is a busy freelancer travel writer who’s always on the go. Sean is a park ranger who works for the Willford State Park and just found out the park didn’t get the grant he applied for the park’s Nature Center. When Jackie’s best friend, Annette, convinces her they need a getaway, they decide to go glamping on a giant RV to get some peace and quiet from their busy lives. Where do they decide to go? The Willford State Park.

Jackie and Annette’s glamping trip seems to go wrong at every turn, the fridge breaks, their food gets eaten by racoons, the RV won’t start… Meanwhile, Sean is determined to come up with a plan to make sure the Nature Center gets renovated.

Jackie goes to the park office to bring some suggestions to Sean and his coworker, Daisy. Sean is resistant, but Daisy realizes that Jackie is a travel writer. Maybe she could write a piece that would draw attention to the park, and they could finally get the grant they need to renovate the Nature Center!

Annette’s sister unexpectedly goes into labor back in the city, so Annette goes to her. This leaves Jackie with the RV until the owner can come and repair the broken parts. But Jackie doesn’t just sit around and wait. She and Sean go on a hike, sit in on a campfire for junior park rangers, and more.

When Sean’s mother, a former parker ranger at the park, visits the park to surprise Sean, Jackie and Sean are hiking to a waterfall. Sean wants to find a stone that his late father used to make his mother’s engagement ring, so he can make it into a necklace for her 60th birthday. Sean brings up the idea of Jackie writing an article for the park, but Jackie says she can’t. Instead, she offers something even better. She writes a grant proposal for a prestigious grant for the park!

When Jackie tries to give Sean a copy of the proposal letter, she overhears Daisy and Sean talking about how Sean couldn’t convince her to write an article. As a result, Jackie feels she’s been tricked and that Sean’s feelings for her were just a ruse. So, she leaves the park without hearing the full story or even saying goodbye. Can Sean make things right?

THE NATURE OF ROMANCE has some pretty scenic shots and decent acting for a TV movie. The script is predictable, but that doesn’t deter from the story’s overall sweetness. Although the movie’s overall production quality isn’t show-stopping, the movie is well-made.

THE NATURE OF ROMANCE has a strong Romantic worldview with light moral and environmentalist elements. A character says her parents encouraged her to follow her dreams and focus on the positive. She also makes a comment about fortune favoring the bold. The movie has underlying themes about finding the right romantic partner and admiring the beauty of nature. Moral elements of friendship, kindness and honoring one’s mother are present. Finally, some light environmentalist elements come into play where the ranger wants people to preserve and respect nature, but it’s not a radical political statement. MOVIEGUIDE® advises light caution for THE NATURE OF ROMANCE.