THE PHANTOM OF THE OPEN 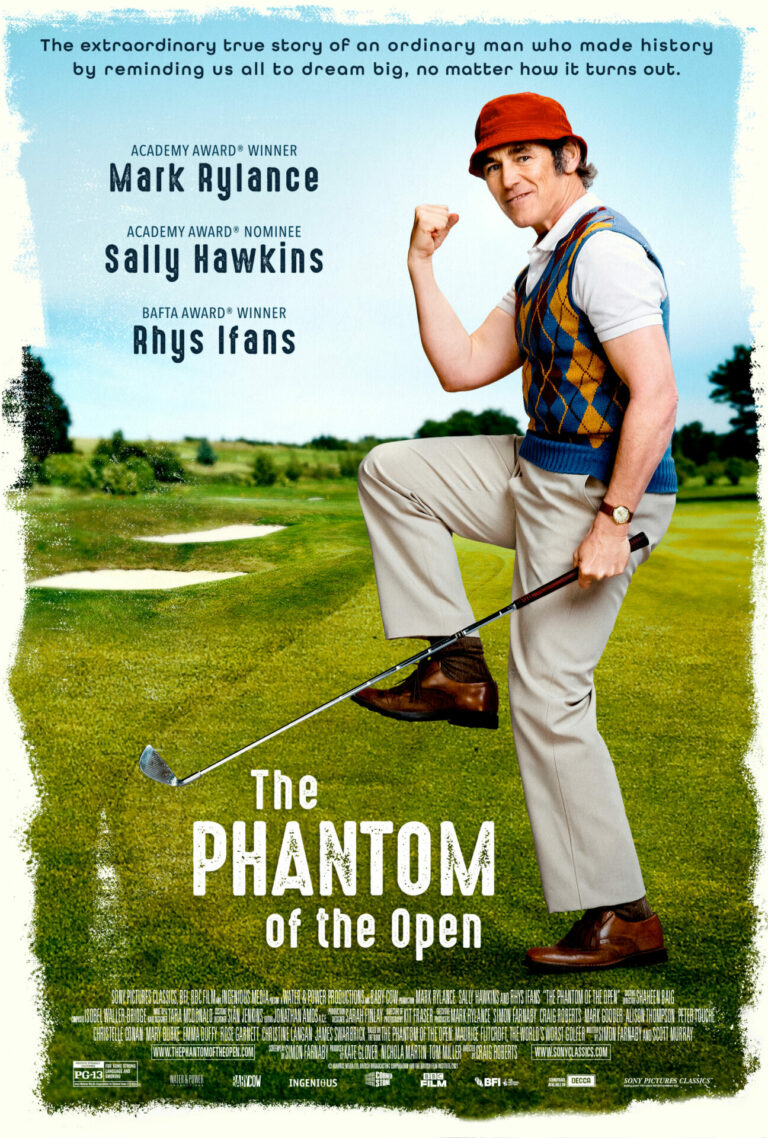 THE PHANTOM OF THE OPEN is a comedy based on the true story of Maurice Flitcroft, a British blue collar worker. Maurice finagles his way into the 1976 British Open Golf Championship qualification game without ever having played a round of golf. He is banned, harassed, threatened, and even arrested for his passion to play golf. He endures immense humiliation from people in the centuries-old golf establishment, but he doesn’t give up. Maurice fights his way to become the best “World’s Worst Golfer” in the history of the game.

THE PHANTOM OF THE OPEN is a delightful, funny movie that keeps viewers inspired throughout the story. There is great chemistry and an ideal marriage between Maurice and Jean, played to perfection by Mark Rylance and Sally Hawkins. Both give excellent performances. The movie contains strong pro-life, pro-family messages. There are also some great conservative messages about hard work, perseverance and the pursuit of happiness against all odds. However, PHANTOM OF THE OPEN is marred by lots of foul language, including several strong obscenities and profanities. So, MOVIEGUIDE® advises strong or extreme caution.

(BBB, PP, LL, V, S, A, D, M):
Dominant Worldview and Other Worldview Content/Elements:
Very strong moral, pro-family, pro-life worldview with strong conservative messages stressing hard work, perseverance and the pursuit of happiness
Foul Language:
Nineteen obscenities (including two “f” words), two Jesus profanities, two light profanities, some vulgarities such as the word whore, and one obscene gesture
Violence:
Characters are hit by golf balls or clubs, people carry a coffin, and there’s some footage of World War II bombs being dropped
Sex:
Main character has an out-of-wedlock child, plus a married couple kiss affectionately
Nudity:
No nudity
Alcohol Use:
Yes, a few scenes of drinking scotch and beer
Smoking and/or Drug Use and Abuse:
There are several scenes where main characters smoke, but there are no drugs; and,
Miscellaneous Immorality:
A boy is embarrassed by his hard-working father.

THE PHANTOM OF THE OPEN is a hilarious, uplifting movie based on the true story of dreamer Maurice Flitcroft, a laid off crane operator for a shipyard, and his entry into the 1976 British Open Golf Championship qualification without ever having played a single round of golf. Flying in the face of the snobbery and exclusivity that often surrounds the game of golf, the blue collared wonderful family man, Maurice, pursues his dream as a championship golfer, while the entire centuries-old upper crust “country club” establishment tries to stop him. There is a fair amount of profanity, including using the Lord’s name in vain, and a few “f” words, and drinking and smoking. So, extreme caution is recommended.

Maurice Flitcroft grows up in a small blue collar town in England, where he learns his station in life is to work an intensive labor job until he dies. During World War II, he’s sent to Scotland for protection. While in Scotland, Maurice is exposed to high society. He learns the concept of pursuing dreams.

The war ends, but Maurice’s dreams remain, along with his eternal optimism. Back in his small blue collar community, Maurice dutifully takes his place as a crane operator at the shipyard. He meets the love of his life, Jean. When he proposes marriage, Jean reveals she has an out-of-wedlock son with no father. Maurice assures her the boy has a father now. He commits to take care of his family with strength, hard work, patience, and personal sacrifice. The couple have two more twin boys while Maurice heroically raises his family to pursue their dreams.

Years later, the twins become traveling disco dancers. The eldest son becomes manager of the shipyard. Restructuring leaves Maurice on the brink of a layoff. His appreciative wife lovingly convinces Maurice that it’s time for him to follow his own dreams. However, the now almost 50-year-old has long forgotten any dreams he had for himself. In the middle of the night, he stumbles onto the game of golf. He’s mistakenly accepted as a professional contestant at the British Open Golf Championship qualification without ever playing a round of golf.

The snobby establishment tries to pressure him into quitting in order to save themselves any embarrassment. However, Maurice is sure his ship has arrived, and he continues. A journalist picks up his story. He’s called the “World’s Worst Golfer” to ever play. Maurice unwittingly becomes a representation for all those shut out of high society. High Society golfers push back by banning him from every golf course in the country so he can’t qualify for further championships, at least not under his own name.

Maurice plays under a pseudonym but gets arrested. Is this enough to stop a man with dreams?

THE PHANTOM OF THE OPEN is a delightful, funny movie that keeps viewers inspired throughout the story. There is great chemistry and an ideal marriage between Maurice and Jean, played to perfection by Mark Rylance and Sally Hawkins. Both give excellent performances. The movie contains strong pro-life, pro-family messages. There are also some great conservative messages about hard work and the pursuit of happiness against all odds. However, THE PHANTOM OF THE OPEN is marred by lots of foul language, including several strong obscenities and profanities. So, MOVIEGUIDE® advises strong or extreme caution.