"The Faith of a Child" 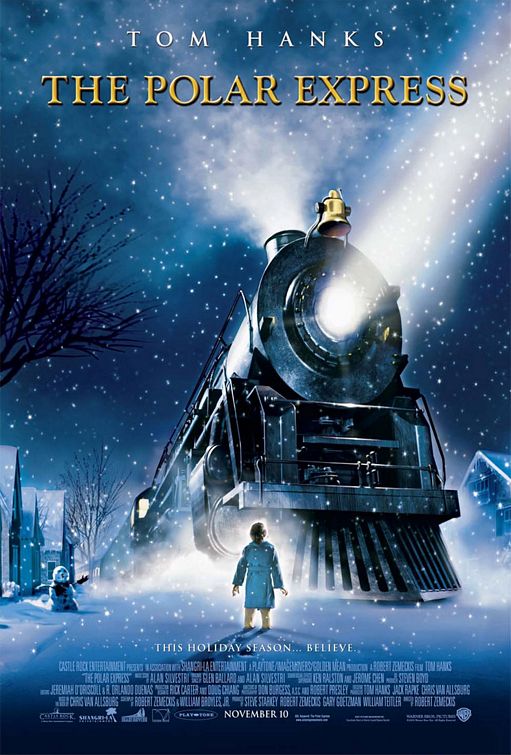 THE POLAR EXPRESS is a fun-tastic, holiday adventure for the whole family. Based on the popular book by Chris Van Allsburg, it tells the story of a boy who meets some friends on a magical train to the North Pole, run by a friendly conductor played by Tom Hanks. Most of the story centers on the thrilling, spectacular adventures of the boy while he journeys to the North Pole. He, along with a couple other children on the train, help the conductor make sure the train gets safely to its destination.

THE POLAR EXPRESS is a magical tale with spectacular animation. All of the four children learn important lessons. The animation and effects are superb, and the characters provide lots of fun along the way. Regrettably, the movie lacks any references to Jesus Christ, the real reason for the Christmas season. Its metaphors to belief and faith are too generic and too universal. Still, THE POLAR EXPRESS is a rare treat. The adventures before getting to the North Pole are wonderful, thrilling and inspiring. THE POLAR EXPRESS has a look and feel unlike any other animated movie you will see. It is well worth seeing.

(BBB, C, V, M) Very strong moral worldview with some redemptive elements and few objectionable qualities; no foul language; violence is mostly just exciting, full of hairbreadth turns and escapes, including boy walks on top of speeding train, children tumble down long curvy slide, and train runs off tracks and almost crashes several times; no sex or nudity; no alcohol or smoking; and, movie is about a long adventurous journey to the North Pole to see Santa Claus, no references to Jesus, and movie talks generically about the importance of having a childlike belief, but belief in what?

THE POLAR EXPRESS is a fantastic holiday adventure for the whole family. Although it doesn’t present the true reason for the season, the birth of our Savior, Jesus Christ, it spreads a lot of holiday cheer for parents by including important lessons for children of all ages. Christians will appreciate the moral and theological parables in the story.

The movie opens with a boy’s mother tucking her son into bed on Christmas Eve. The boy has no faith in Santa Claus and is surprised to see a big train pulling up in front of his house just before midnight. The boy goes outside to take a look. He’s greeted by an amiable conductor. The conductor tells the boy that the train is going to the North Pole.

Against his better judgment, the boy gets on the train. There, he encounters a bunch of other children on the train. Of particular interest are a little girl and a know-it-all kid. The last stop for the train is a poor boy’s house. The poor boy is reluctant to board, but the little girl and the boy encourage him to take a chance.

A series of adventures occurs before the train makes it to the North Pole. The boy helps the girl when her ticket gets lost, and they help the conductor make sure the train gets safely to its destination.

THE POLAR EXPRESS is a magical tale with spectacular animated adventures. Most of the story centers on the adventures of the boy and his newfound friends, including the know-it-all kid who eventually becomes part of the adventure. All of the four children learn important lessons. The little girl learns how to have confidence in her leadership abilities, the know-it-all kid learns humility, the poor boy learns to trust others, and the hero learns to have the faith of a child.

These positive messages are regrettably limited by the lack of any references to Jesus Christ, the real reason for the Christmas season. For instance, when the children get to the North Pole, all of the Christmas songs in the background are secular. Thus, although Santa Claus tells the hero that the trappings of Santa Claus are just symbols of Christmas, the movie neglects to show that these symbols ultimately point to Jesus Christ, the redemptive gift that God has given all of us for our salvation and deliverance. In trying so hard to reach out to non-Christians with a universal message about belief of all kinds, the filmmakers have diluted the emotional power of their ending. Great art demands specificity, no matter how subtle and universal the artist wants to be.

Still, THE POLAR EXPRESS is a rare treat. The animation and effects are superb. The adventures before getting to the North Pole are wonderful, thrilling and inspiring, and the characters provide lots of fun along the way.

Rent or Buy THE POLAR EXPRESS: