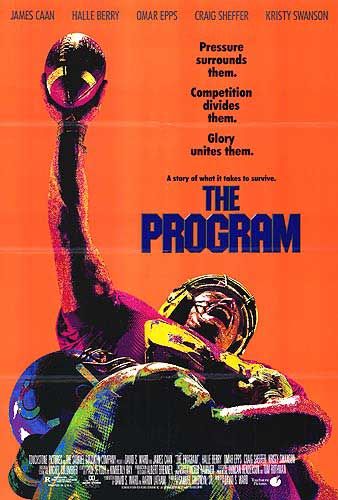 The film THE PROGRAM tells about a university's desire to win at all costs and putting unbelievable pressure on everyone involved: the football coach and each of the players. The movie is well acted and technically well produced, and makes good use of music, lighting and cinematography; however, over 100 obscenities and profanities along with excessive violence mar this sports-action drama.

THE PROGRAM is about the drive to win at any cost, so fictional Eastern State University puts the pressure on football coach Sam Winters (James Caan) to win the season and bring back the university’s winning image. In this movie, one cannot avoid several widely held beliefs which are deeply enmeshed in many areas of American culture and which can cause a lot of trouble: winning equals success; aggression is the way to deal with conflict; and, violence is a release for anger. Also, the film is accurate in showing how the broken American family leaves its youth unprepared for adulthood, and for the added stress of competitive environments like college. In the film, we meet the players including Darnell, a rookie player who soon realizes that college life and football will be much more difficult than he thought. Each of the other players is fairly well defined in the film.

The movie is well acted and technically well produced and makes good use of music, lighting and cinematography. It is well paced, holding the viewer’s attention and offering plenty of action while it develops its characters. The film is entertaining and its protagonists appealing; however, several caveats are in order for the extreme amount of profanity and obscenity, violent images and explicit scenes of steroid injections.