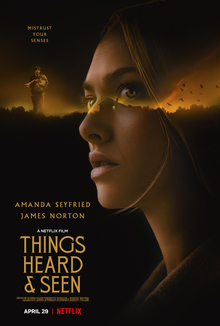 Netflix’s THINGS HEARD AND SEEN is based on a novel by Elizabeth Brundage. It follows the Claire family through the seasons for the year prior to the winter of 1981. In the beginning, George Clare takes a professorship at a university and relocates his wife, Catherine, and daughter, Franny, to a new city and house. When Catherine starts to feel a spiritual presence in the house, George writes her off, even though things aren’t what they seem.

THINGS HEARD AND SEEN uses horror movie conventions well. It also makes good use of editing, ethereal music and obvious foreshadowing, which inserts some intrigue into the plot. The acting is well done, but the ending’s a bit confusing. THINGS HEARD AND SEEN has a mixed Christian, occult worldview. Characters quote scripture twice, a mother encourages her daughter to pray and get involved in church, and someone says, “The truth will set you free.” It’s also clear the parents love their daughter. However, the movie contains excessive foul language, a particularly bloody murder scene and marital infidelity. So, MOVIEGUIDE® finds THINGS HEARD AND SEEN “excessive.”

(CC, B, OO, Ho, LLL, VV, SS, A, DD, MM):
Dominant Worldview and Other Worldview Content/Elements:
Strong Christian worldview where character briefly quotes Psalm 23:4 but doesn’t outright state it’s from Scripture, a mother encourages her daughter to pray and get involved with church community over the phone, recognition of a spiritual realm, and character references “the truth will set you free,” plus it’s clear that parents love their daughter, marred by strong occult content, including an upside down cross, plus mention of a character’s homosexual cousin
Foul Language:
23 obscenities (including several “f” words), six strong Jesus profanities 27 light profanities, and depictions of a woman gagging herself, but it’s clear she has an eating disorder
Violence:
Very violent scene when a Man takes an axe to woman in bed and murders her (with plenty of blood splatter), plus woman tries to pry a ring from a window seal with a knife, and it goes flying but doesn’t harm anyone, mention of a father beating his child to the point where he bleeds, mention of drowning, story about a man who killed, man holds a woman by the wrists tightly to the point where she’s in obvious distress, man throws a radio on the ground and causing it to break, man runs a woman off the road, and a buzzard breaks through a window and glass shatters
Sex:
Strong sexual content overall includes implied marital intercourse after the couple kisses in bed, man pleasures himself in the shower, implied infidelity, and mention of sexual satisfaction, and woman straddles a man who isn’t her husband, and unbuttons his pants but camera cuts away
Nudity:
Partial upper rear female nudity as woman pulls up her pants, rear male nudity and upper male nudity
Alcohol Use:
Social drinking
Smoking and/or Drug Use and Abuse:
Smoking and one scene with marijuana use that leads to a character being stoned and then driving, a discussion about growing marijuana, a mother and father debate giving their young daughter sedatives per a doctor’s recommendation; and,
Miscellaneous Immorality:
Strong miscellaneous immorality includes secrecy, occasional passive aggressive remarks, mention of theft, forgery, bribery, and marital discord.

THINGS HEARD AND SEEN begins in Winter 1980. A man returns home, finds blood on his car falling from the ceiling of the garage and sees a young girl standing on a couch as she turns to look at him slowly. Cut to the Spring before, the same girl who viewers learn is named Franny from moments earlier, has a birthday party with her parents, including the man from the scene before, named George Clare, and Franny’s mother Catherine Clare. In the coming weeks, George announces he’s moving the family to be closer to his new job as a professor, since he’s just completed his doctoral dissertation.

The Clares move into a home in the New York countryside that was built in the 1800s and it’s clear that the home is very creepy. George Clare’s hiring processor, Floyd Debeers, shows him the campus, Saginaw, and stresses the work of Emanual Swedenborg, a man who believed that the natural world has a counterpart in the spiritual world. However, George thinks Floyd is too mystical and writes him off.

Back at the house, Catherine finds a Bible with family records dating back to the 1800s. One of the family names has the word “damned” written beside it, which piques Catherine’s interest into the history of the town and the home she’s now running. Soon afterwards, Catherine goes to the town’s historical society to unearth any knowledge she can and familiarize herself with the community in general.

As Catherine and George settle into their new rhythms, their chemistry and unity as a married couple fade. Both George and Catherine cheat on one another. To top it off, George thinks Catherine’s fascination with the spiritual energy of the house is ludicrous, which only pushes her further away from him. Can she really be imagining things? Lightbulbs break, a buzzard breaks through the master bedroom window. This can’t be normal, can it?

Is Catherine on to something that could tear her family apart? Who will believe her?

THINGS HEARD AND SEEN does a great job using horror movie conventions. It also makes good use of clever editing, ethereal music and obvious foreshadowing, which inserts some intrigue into the plot. Both Amanda Seyfried and James Norton bring some complexity to their characters’ intentions, and it’s fun to see actress Karen Allen from the INDIANA JONES movies and SANDLOT on screen too. The ending is a bit confusing, but perhaps will make sense to anyone who’s read the book.

THINGS HEARD AND SEEN has a mixed Christian, occult worldview. On two separate occasions, characters quote Scripture, a mother encourages her daughter over the phone to pray and get involved in church, and another character references “the truth will set you free.” It’s clear that the parents love their daughter, and there’s a recognition of a spiritual realm and life after death. However, the movie contains excessive foul language, a particularly bloody murder scene and marital infidelity. There’s also one mention of a character’s cousin who’s homosexual. So, MOVIEGUIDE® finds THINGS HEARD AND SEEN “excessive.”