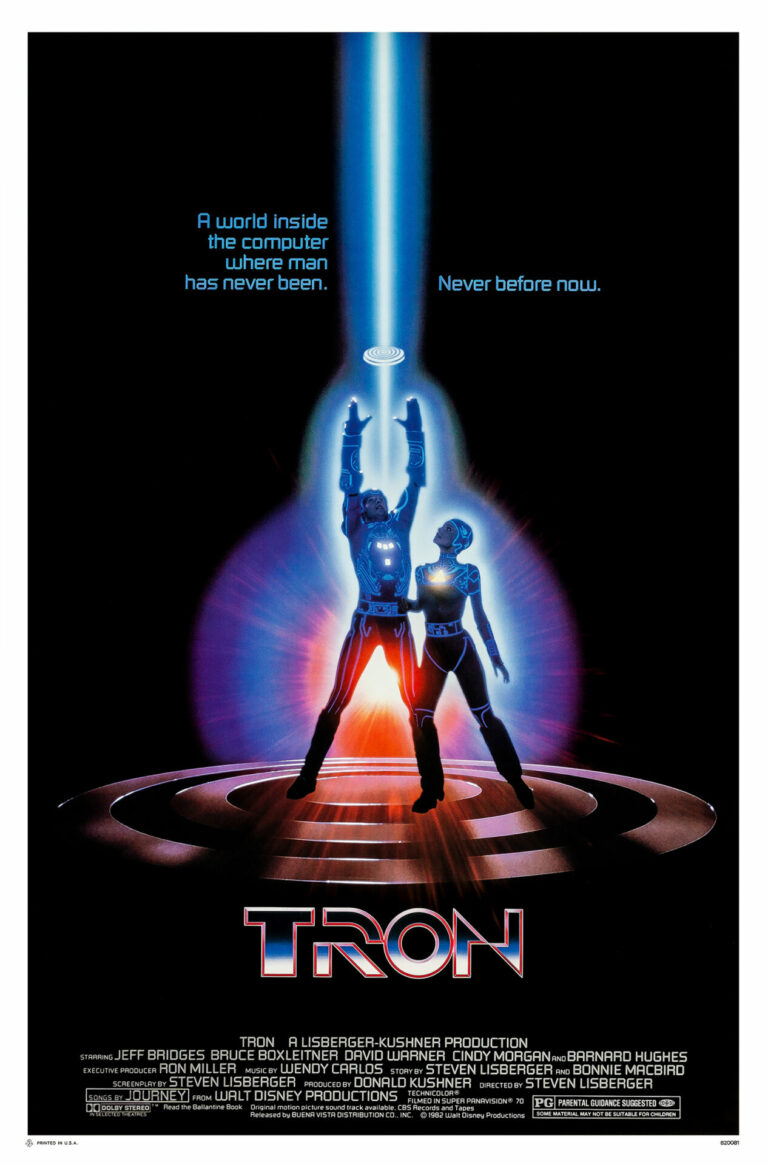 Disney’s Tron is a philosophical science fiction masterpiece, which celebrates its 40th anniversary this year. Kevin Flynn is the brightest computer programmer and hacker at ENCOM, a major technology and virtuality developer. However, his creative efforts in the form of numerous programs and games are frustrated when a man named Dillinger pirates his ideas and designs, takes credit for Flynn’s work, uses it to rise in the company ranks and later fires Flynn when he finds him digging into the intellectual theft. Through a series of technological events, Flynn enters the company’s virtual game world in a search for the truth and can only survive and achieve his goal by joining forces with a heroic security program, Tron.

This masterful science fiction epic is not only very creative in execution, with engaging characters, and high production values, but also its worldview is strikingly biblical and Christian with a few odd bits of humanist thought awkwardly presented. Although there is brief language, some action violence, and some light romance, the movie may be enjoyed by older children (with some caution) and adults alike.

(CCC, BBB, H, L, V, S, M):
Dominant Worldview and Other Worldview Content/Elements:
Strong Biblical Christian worldview with a few mixed humanist elements
Foul Language:
Two uses of “d-”
Violence:
Some programs are harmed or derezed (killed) in the game, and there is a threat that a human being could be killed in the game, many programs look like their users, and their injuries or deaths could thus be disturbing to younger viewers, an user punches a program in the face knocking him out
Sex:
Some passionate kissing between a man and woman, in and out of the game, there is an implied love triangle
Nudity:
man is briefly shirtless
Alcohol Use:
None
Smoking and/or Drug Use and Abuse:
None;
Miscellaneous Immorality:
Some suggestive statements.

Disney’s Tron is a philosophical science fiction masterpiece, which this year celebrates its 40th anniversary. Kevin Flynn is the brightest computer programmer and hacker at ENCOM, a major technology and virtuality developer. However, his creative efforts in the form of numerous programs and games are frustrated when a man named Dillinger pirates his ideas and designs, takes credit for Flynn’s work, uses it to rise in the company ranks and later fires Flynn when he finds him digging into the intellectual theft. Flynn’s friend, Alan, who is still with the company, has a security program called Tron which he has put into the company’s virtual game world. Alan’s girlfriend, Lora, who also still works at ENCOM, has helped to build a “digitizer” – a machine which can transport biological things and beings from the real world to the game world. The game world is administered by the Master Control Program (MCP), which learns and grows at an alarming rate, has become self-aware, and is now controlling the leadership of ENCOM. When Flynn reenters ENCOM with the help of Alan and Lora, he challenges the MCP to a virtual game in order to break into the system and find evidence of Dillinger’s theft. The MCP uses the digitizer to put Flynn “on the game grid” of the virtual world where he must participate in gladiatorial challenges to stay alive and find what he’s looking for. Can Flynn connect with Alan’s Tron program to expose ENCOM’s intellectual property theft and, more importantly, defeat the dystopian evil of the MCP?

Tron is a powerful science fiction epic. Despite its dated graphics, its story and themes remain as relevant as they were 40 years ago in 1982. It is a lovingly crafted work of sci-fi storytelling with engaging characters and strongly biblical imagery. The game world is very creatively depicted as a place of great promise and challenge which has been taken over by a malevolent force. Real life characters, to whom viewers have become connected, have in-game avatars that are exact images of themselves so that empathy is not lost and even mere “programs” are humanized in ways that make them meaningful and keep the viewer invested in their plight. The nature of the in-game world is such that it offers a journey of challenging action adventure in pursuit of a good and honorable goal. The movie is of a very high quality, characterized by thoughtful and creative storytelling, excellent writing, and overall good production values. Repeated viewings of Tron are helpful in detecting its several complex and nuanced layers.

One unique and notable way in which the movie stands out is in its biblical worldview and very clear Christ imagery. The imagery of the two worlds – the real world and the game world – is used brilliantly to point to the biblical cosmological understanding of the two levels of reality – the uncreated and created. The movie presents a thought-provoking parallel to the relationship of the higher reality of the uncreated Creator and the lower created reality of his creatures (men and women) with the relationship of programmers, like Flynn and Alan, and their programs, like Tron. This primary philosophical element of the story is seen in that Tron and the Tower Guardian maintain a firm belief in the higher reality of their “creators” (whom they refer to as “users”) while the MCP and his minion programs are trying to convince everyone that the virtual world is all there is and that the users do not exist. A Command Program who is the right hand of the MCP makes this abundantly clear in a speech he gives to Flynn: “Those of you who continue to profess a belief in the users will receive the standard sub-standard training which will result in your eventual elimination. Those of you who renounce this superstitious and hysterical belief will be eligible for joining the warrior elite of the MCP.” This is a clear parallel to Satan’s attempt to convince humans that the Creator doesn’t exist. The view of the two levels of reality is a metaphysical message of immense importance and is a key point of conflict between the biblical worldview (which believes that there is a Creator and his creatures) and all other worldviews (which believes that this world is all there is).

There is one point at which the writers are inconsistent with this strongly biblical imagery, when Tron assumes that, as a user, Flynn has a plan to defeat the MCP, and restore order; Flynn’s response is that humans are limited in knowledge and power like the programs they make. While this is simply to admit the finite nature of human “sub-creators” (J. R. R. Tolkien, “On Fairy-stories”, p. 23), it does weaken the imagery a bit since our Creator certainly does have a plan. Yet, this is minor in light of the movie’s climactic final battle. At Central Control, a red, unambiguously satanic MCP broods over his victims as he seeks to devour more and more programs, to assimilate them into himself and to ultimately come to dominate all life. In order to overcome the evil, Flynn must be self-sacrificial and dive into the heart of darkness to conquer chaos, which is demonstrably reflective of how Christ was willing to selflessly suffer hell for his people and overthrow the Enemy.

Finally, the movie is also largely exemplary in the realm of problematic content. There is brief foul language, the violence is not gory in any way, although some programs look like their users, and their injuries or deaths could thus be disturbing to younger viewers, adolescents, or sensitive adults. There are also a few scary images, such as the appearance of the MCP. There are a couple scenes of kissing and an implied love triangle. One male character is briefly shirtless. However, as a whole, the movie may be enjoyed by nerds and non-nerds, older children (with some caution) and adults alike.