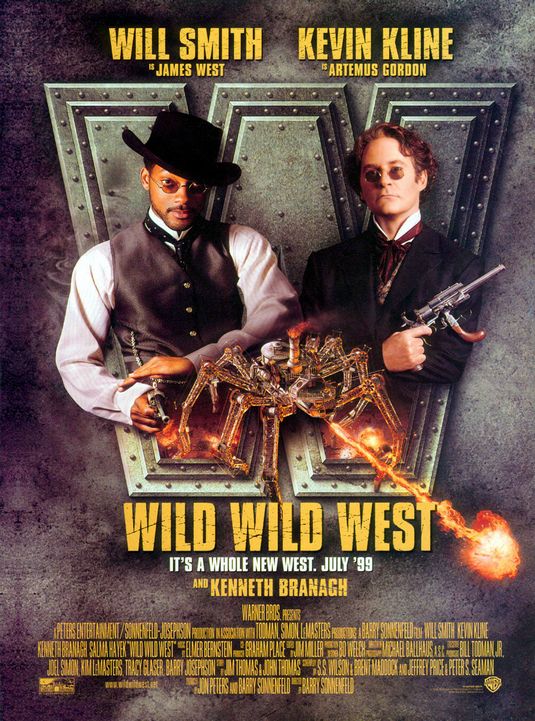 In THE WILD WILD WEST, Will Smith and Kevin Kline team up in a big, flamboyant, simply plotted, and finally merely serviceable adaptation of the popular television series which aims to please all members of the family. America and the President are saved as these government agents encounter some violent and a few sexually suggestive moments while using a few obscenities.

If you like your sci-fi action, comedies, spy movies, and Westerns served up with ham and cheese, then THE WILD WILD WEST is for you. It has echoes of INSPECTOR GADGET, JAMES BOND, THE GREAT RACE (with Tony Curtis and Jack Lemmon), and, of course, classic images of many a Western movie. Big, flamboyant, over the top, simply plotted, strong at the start and merely serviceable at the finish, this adaptation of the popular television series aims to please all members of the family, and barely makes it.

Will Smith (an actor who can seemingly do no wrong these day) plays James T. West, a government agent who shoots first, second, third, and then may ask a few questions later. He is partnered with another government agent Artemus Gordon (Kevin Kline), a master of disguise and a brilliant inventor of gadgets large and small. Together, this water and oil personality mix is sent by President Ulysses S. Grant to track down the diabolical villain, Dr. Arliss Loveless (Kenneth Branagh). Loveless lost the bottom half of his body in the Civil war and personally travels in a motorized wheelchair. Like Artemus, he is a scientific wizard and has created a giant mechanical Tarantula which shoots fireballs down on the innocent.

West and Artemus take a souped-up train filled with exploding secret doors, exploding cue balls and other secret weapons designed by Artemus to search for their nemesis. Along the way, they stop by a party for VIPs and inadvertently pick up entertainer Rita Escobar (Selma Hayek), a woman with her own mission of finding her lost father. At the party, West is almost hanged and shot, while Artemus disguises as a mountain man in search of Loveless’s whereabouts.

Encountering other challenges along the way such as fleeing from a flying, spinning sawblade and getting collared with huge magnets, the dynamic duo eventually meet up with Loveless in Utah. There, President Grant stages a ceremony for the linkage of two railroads and says, “May God continue unity in America.” Loveless captures the President and demands he sign over the Louisiana Purchase to Loveless, so that Loveless can create his own nation. As the President stalls, West and Artemus dress up in drag, create a diversion, get into fights with the villain’s henchmen, and create a splashy ruckus all aboard the giant metallic Tarantula which is heading toward a giant cliff.

Moral elements wearing the white hat in this movie are bravery, honoring and protecting the president, singing “The Battle Hymn of the Republic,” respect for wits over might in victory over evil, and recognition of God in the building of America. Violence is also generally action oriented, and not bloody, and the cross-dressing is used for disguise and not as a result of perverted sexuality.

However, black hat elements arise in this family-oriented movie with the inclusion of prostitutes, some heavy kissing by our naked hero implying the start of fornication and some sexual humor such as a homosexual joke & a very veiled, subtle joke implying bestiality. Also, a few violent scenes occur which might scare little ones such as a man getting decapitated and a tank which singularly mows down around 100 men. Although bloodshed is little, these elements are directed for maximum scares.

Much ado is made about West being black. Naturally, it would be strange for a black man to be a government agent a few mere years after the Civil war. Most of the explanation seems natural and fits well into the context of the story, but some of it goes into mollycoddling the racially hypersensitive.

By now, many people have heard that this movie had a budget that went out of control, and that re-shoots and/or additional shoots were required. It was decided that more laughs were needed, and so the scene where West and Artemus try to remove their magnetic collars was created. Though having marginal laughs, it seems like a tacked-on moment. Other strange plot points or images crop up which indicate that the story was originally intended one way, but was edited to suggest another. These awkward moments will probably not matter to the children, but probably will be very obvious to most people.

THE WILD WILD WEST plays a lot like TWISTER. It is very splashy with lots of action and a good amount of humor, but its enjoyment lasts only as long as it is playing. In other words, THE WILD WILD WEST is quite forgettable. Yet, with the charismatic Will Smith, the hammy Kevin Kline in one of his better recent roles, lots of gadgets, splendid costumes, and a few interesting special effects, this trans-genre movie ranks as good as most summer popcorn movies, and will please those who wish to beat the summer heat. It doesn’t have as much foul humor like the other PG-13 rated comedies this summer, and it does recognize God and heroism. It may not make as much, however, as expected because of the odd editing and mixed word of mouth.