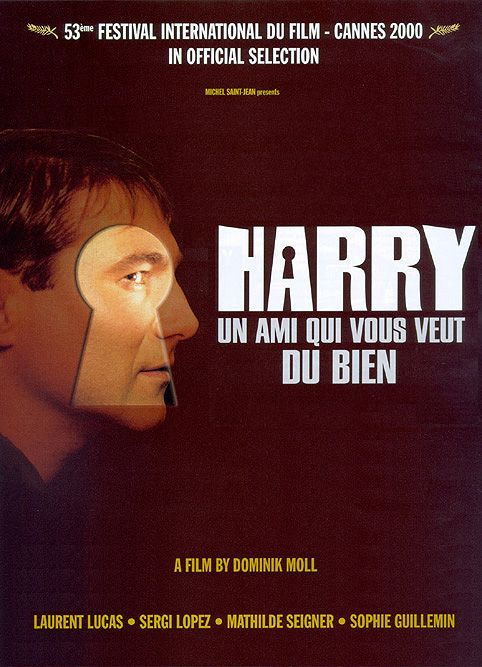 WITH A FRIEND LIKE HARRY . . . is a French suspense thriller about a young family’s encounter with a mysterious former classmate of the father’s. Michel, the beleaguered father of three young daughters, meets Harry and his voluptuous girlfriend, Plum, during a vacation pitstop. Soon, Harry and Plum join Michel and his family at their vacation home. Harry’s carefree spirit and charm light up the family’s little holiday, but his easygoing demeanor hides an explosive, impulsive, deadly anger that will do whatever it takes to solve Michel’s family problems, including dealing with Michel’s overbearing, bickering parents.

Although several murders occur in WITH A FRIEND LIKE HARRY, director Dominik Moll refuses to focus on the mayhem and gore. Instead of blood, gore and action, the movie builds suspense and danger through character, dialogue, music, editing, and startling, but measured, visuals. As such, it provides an excellent diversion for adults looking for a different kind of French thriller. The movie does, however, include some strong foul language and brief nudity. An ironic, humanist worldview also undercuts the positive elements regarding caring for children and protecting loved ones in this suspenseful, finely crafted thriller.

WITH A FRIEND LIKE HARRY . . . is a French homage to Alfred Hitchcock. It’s a suspenseful twist on the classic plot of the stranger with a secret.

The movie opens with a young family going on vacation in France. Family man Michel sets out for his summer home in the countryside with his wife Claire and their three mischievous daughters. A blistering heatwave and the increasingly cranky children force the family to make a pitstop. In the rest area, Michel bumps into Harry, an old school classmate he doesn’t remember, but who remembers Michel very fondly. Harry even recites from memory a poem that Michel wrote as a teenager 20 years ago and mentions a novel, THE FLYING MONKEYS, that Harry had started writing. Harry is surprised, and disappointed, that Michel has given up his writing in the wake of adult responsibilities.

Soon, Harry and his voluptuous girlfriend, Plum, join Michel’s family on their vacation. Harry tells Michel and Claire that he’s now wealthy because of his dead father’s inheritance and can do what he likes. Harry’s carefree spirit and charm light up the family’s little holiday, but Claire remains a little apprehensive about Harry. Her apprehension seems to be well-founded when Harry decides to buy Michel a new, air-conditioned sports utility vehicle when Michel and Claire’s car breaks down. As time goes by, viewers learn that Harry’s easygoing manner hides an explosive, impulsive, deadly anger that will do whatever it takes to solve Michel’s family problems, beginning with eliminating Michel’s overbearing, bickering parents. “Excess is the only way to fulfillment,” Harry tells Michel.

Of course, Harry represents the darker side of Michel’s personality. At one point, Michel tells one of his daughters, “You can’t always do what you want in life,” but Harry reminds Michel of the sacrifices and compromises he’s made for his family, including those he’s made for his abrasive parents. Harry encourages Michel to start exploring his creative side. When Michel learns the true cost of Harry’s encouragement, Michel is faced with a question: Is he willing to go to Harry’s murderous lengths in order to resolve family tensions and be happy? Michel’s answer to that question provides the movie’s final bloody twist of irony.

Sergi Lopez (AN AFFAIR OF LOVE and WESTERN) gives a magnificent portrayal as the disturbed Harry Ballesteros. Lopez plays Harry as if he can’t control his huge capacity for love and friendship. Harry lets his feelings push him to extremes. Laurent Lucas as the repressed Michel, however, shows viewers that Michel tries to control his feelings to the breaking point. Witnessing Harry pushing Michel to re-examine his life is Michel’s wife Claire, played by Mathilde Seigner. Claire acts as a mirror for the audience’s fears about Harry. Sophie Guillemin plays Harry’s seemingly superficial girlfriend, Plum. An innocent, good-hearted woman, Plum sincerely loves Harry, but is too eager to please him. She doesn’t make problems for Harry, because she knows how Harry hates problems.

Although several murders occur in WITH A FRIEND LIKE HARRY . . ., director Dominik Moll refuses to focus on the mayhem and gore. As Moll explains in the production notes, “Violence has become so banal that it has lost all of its meaning. Scenes designed to shock the audience leave me cold. I get much more fun out of creating tensions by suggestion, by not having blood spurt all over the screen.” Thus, HARRY is relatively clean in the violence department. Instead of blood, gore and action, the movie builds suspense and danger through character, dialogue, music, editing, and startling, but measured, visuals. As such, it provides an excellent diversion for adults looking for a different kind of French thriller. The movie does, however, include some strong foul language and a scene where Harry and Plum lie naked on their stomachs atop a bed in their hotel room.

What seems more disturbing than the language and the nudity is the fact that Michel ultimately benefits from Harry’s evil deeds. The movie views this benefit in an ironic way, however, so it does not necessarily condone this somewhat immoral outcome, nor Michel’s questionable actions when Michel learns what Harry’s been doing behind his back. It can also be argued that Michel benefits because he finally takes active steps to defend his family from Harry’s warped sense of problem solving. Still, the ending to WITH A FRIEND LIKE HARRY . . . lends an ironic humanist worldview to the movie’s view of family life. Michel and Claire’s family barely survives their encounter with Harry, who represents the dark desires that exist in every family. In this way, the movie explores the sharp tensions between selfish human desires and the polite surface of civil society, the thin line between normal and abnormal human behavior.