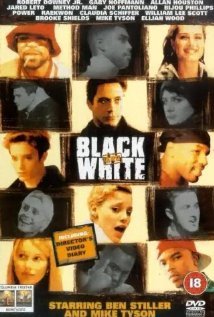 In BLACK AND WHITE, white children live the hip-hop lifestyle and urban black men search to find themselves through music, sex and violence. A white couple unhappily married because the husband enjoys homosexuality decide to make a documentary about the white children. Two white girls do sexual favors to be accepted by a black musician named Rich and his friends. Meanwhile, a black basketball star named Dean gets caught taking illegal money to fix a college game and is blackmailed to expose Rich for the crimes he has committed. Rich finds out about this, resulting in murder.

This is a thoroughly pagan movie with no consequences for strong immoral behavior, including murder, blackmail and sexual promiscuity. BLACK AND WHITE also includes more than 350 obscenities. Instead of using all this foul behavior to titillate the audience, Hollywood could do all American citizens a favor by rebuking such evil lifestyles. Obviously, it’s not just the movie screens that need a good healthy cleansing, it’s the streets of America. Americans better come to Jesus Christ, or else one day the streets will be washed in these rebellious people’s instead of the Divine Savior’s blood.

In BLACK AND WHITE, white children living the hip-hop lifestyle and inner city black men search to find themselves through music, sex and violence. Director James Toback teams up for the second time with Robert Downey Jr. in BLACK AND WHITE, a movie investigating the allure of the black hip-hop culture to some white teenagers. Also joining the cast are some of Hollywood’s and rap music’s most recognized faces, including Brooke Shields, Ben Stiller, Claudia Schiffer, Elijah Wood, and boxer Mike Tyson. Wu-Tang Clan members Method Man and Raekwon also star and provide the movie’s soundtrack. Brett Ratner, director of the Jackie Chan/Chris Tucker action comedy RUSH HOUR, has a cameo role, getting a quick plug in for his movie.

BLACK AND WHITE follows several diverse groups of people in Manhattan and their interaction with each other in urban lifestyles. Sam (Shields) and her homosexual husband, Terry (Downey), who are both white aspiring movie directors, try to get their break by doing a documentary on the “phenomenon” of white kids influenced by hip-hop, inner-city culture. Charlie (Phillips) and her crew of all white high-school students embrace this culture and its black rap artists, like Rich (Power) and Cigar (Raekwon). While Charlie and her friend, Kim (Matulova), will do virtually anything to be accepted by Rich and his black friends, Rich himself is content to just mock their attempts behind their back and use them for sexual favors.

Meanwhile Rich’s friend, Dean (Allan Houston), a college basketball player, and his live-in white girlfriend, Greta (Schiffer), are fighting to make their inter-racial relationship work. Dean is tempted by an offer of $50,000 from a gambler named Mark to throw a game. He goes to Greta (who just happens to be a grad-student doing her dissertation on racial differences) and asks her for advice. Seemingly undaunted by the amount of money or the ramifications of this illegal activity, she looks him in the eye and says in all seriousness, “Be true to yourself.”

In the next scene, Dean is shown accepting the money from Mark, who flashes a NY City detective’s badge and threatens to arrest Dean. The only way Dean can get out is to turn in his life-long friend Rich. Mark (who happens to be Greta’s ex-boyfriend) gives him time to think about it, so Dean goes once again to Greta for advice, who again seems to care little. The reason behind her lack of emotion is revealed, however, when she goes to Rich and tells him that Dean is going to turn him in to the cops. Greta and Rich fornicate. Afterwards, Rich begins mulling over how to handle his situation with Dean. He goes to his old friend Mike Tyson for advice, and Tyson (amidst a lot of empty conversation about being a man and taking care of what’s yours) says, “To be a king, you’ve got to kill a king.”

The one thing that brings all these groups together is the difference in the color of their skin. Rich tries to help his friend Cigar nail down a record deal that will get them both out of the ghetto as well as a life of violent crime. However, while Cigar seems totally focused on the goals they’ve set for themselves, Rich gets sidetracked by the problems with Dean.

When a Mafia friend refuses to have his men kill Dean on the spot because it’s one of his new bars, Rich goes to Will (Scott Caan) and within minutes has him agreeing to murder Dean. Will is white and, according to his brother, the “king of wannabees.” After a short internal struggle, he carries out the deed, murdering Dean after a basketball practice.

Mark is waiting outside to talk to Dean, however. When Will comes running out, Mark photographs him with the gun. Mark then makes an appointment with Will’s father, Bill King, the DA, and offers to trade the pictures for a case against him that is coming before the court. Bill at first refuses the trade, later to decide that he “won’t let [Will] go to jail, “ and uses the evidence as bribery to keep his son under control.

Sam and Terry meanwhile have a falling out when Terry decides that he just can’t live the heterosexual married life anymore. He leaves Sam and all of her documentary footage to “find himself.”

The movie ends with scenes of everyone in their lives 6 months later as if nothing has happened. No one is in jail, no one has changed, no one has regrets, except for maybe Charlie who, laying on her bedroom floor, looks in the mirror on her door and admits she’s really a failure. Terry is shown walking down a street hand in hand with Casey (Jared Leto), one of Charlie’s male teachers, while his (apparently) ex-wife Sam is making out with Wren (Elijah Wood). A black woman named Sheila finds Rich in bed with Charlie’s friend Kim. She later asks him, “What is it with you and white girls?” then calls him “sick” and says that he needs to “look inside of himself.” This small gleam of any kind of integrity displayed by the movie’s characters is too little, too late.

BLACK AND WHITE is really a mess. Take away the offensive language and gratuitous sex and you’ve got a plot so full of holes that it just doesn’t stay afloat. If taking ten to fifteen “household” names and putting their faces on the big screen were all it took to make a movie, BLACK AND WHITE would be a huge success. It is truly sad that actors with fairly solid reputations would put their names on the line for so poorly prepared a movie. At different points during the movie, a single scene will have the middle just cut out of it, leaving viewers feeling like they’ve blinked though they know they have not. Along with poor editing is poor acting with men who seem to care more about looking cool than playing the part and high school children improvising lines with a vocabulary that contains little more than four-letter words.

Instead of using all this foul behavior to titillate the audience, Hollywood could do all American citizens a favor by rebuking such evil lifestyles. Obviously, it’s not just the movie screens that need a good healthy cleansing, it’s the streets of America. Americans better wake up and come to Jesus Christ, or else one day the streets will be washed in these rebellious people’s instead of the Divine Savior’s blood.