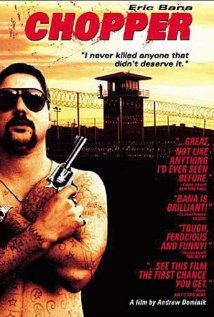 CHOPPER is a violent gangster movie about an Australian thug, named Mark “Chopper” Read, who became a national celebrity when he was acquitted of murder in a celebrated murder case. Now out on video, CHOPPER starts in 1978 with Read in prison, where he murders another inmate but gets stabbed by his best friend Jimmy after Jimmy his friend refuses to murder the members of the dead man’s own gang. Several years later, “Chopper” gets out of prison, but goes on another violent, paranoid rampage. He’s eventually acquitted of another murder charge when it turns out that the murdered man was part of a plot by Jimmy to murder Chopper. Thus, Chopper allegedly acted in self-defense, but that is not exactly true according to this movie.

CHOPPER is full of lots of excessive violence, blood and strong foul language. It is not quite clear, however, what really drives its psychotic protagonist to a life of such anger and violence. Essentially, the movie approaches its protagonist in a humanist psychological way. As such, it leaves it up to viewers to decide what they think about Mark “Chopper” Read and his nefarious career.

CHOPPER is a violent gangster movie about an Australian thug, named Mark “Chopper” Read, who became a national celebrity when he was acquitted of murder in a celebrated slaying of another criminal. The movie opens in an Australian prison in 1978, where convicted kidnapper Chopper is engaged in a war of words with another prisoner, who’s part of a gang that has muscled in on Chopper’s delusions of grandeur as the toughest convict in the prison. Chopper eventually stabs the man to death, but Chopper’s best friend Jimmy balks when Chopper suggests they murder the rest of the gang while they sleep in their cells. Jimmy and another friend turn around and stab Chopper several times, but Chopper survives.

Several years later, Chopper gets out of prison, but he goes on another violent, paranoid rampage. One second, he’s very friendly, but the next second, he’s meaner (and deadlier) than a rattlesnake. The authorities don’t catch him, however, until Chopper shoots one man to death outside a nightclub. It turns out that the dead man was part of a plot by Jimmy and his girlfriend to murder Chopper, so the jury acquits Chopper on the grounds of self-defense. Eventually, Chopper writes a couple of best-selling books about his life of crime and retires to a farm, where he’s apparently still churning out popular Australian books.

If the movie CHOPPER can be termed a success, it’s a success because Eric Bana delivers a tour de force performance as the paranoid, megalomaniac criminal Mark “Chopper” Read. Bana’s Mr. Read is not someone you want to meet, even if you’re meeting him in broad daylight surrounded by lots of people. Bana’s performance is on the level of Paul Muni’s in the violent gangster movie classic by Howard Hawks, SCARFACE (1932), or Al Pacino’s performance in Brian De Palma’s remake of SCARFACE.

This movie is full of lots of excessive violence, blood and strong foul language. It’s not quite clear, however, what really drives this psychotic protagonist to a life of such anger and violence. It does become clear, though, that all Chopper may really want is an audience to pay attention to his psychotic, paranoid fantasies, whether they come from his mouth or from his pen. In a sick way, therefore, this movie seems to prove the old adage that the pen is, indeed, mightier than the sword. Apparently, writing bestsellers is now Mark “Chopper” Read’s preferred career.

Essentially, this movie approaches its protagonist in a humanist, psychological, social science way, as sort of a character study of one criminal’s warped mental processes and behavior. As such, it leaves it up to viewers to decide what they think about Mark “Chopper” Read and his nefarious criminal career. The movie fails to take much note of the failed liberal legal system in Australia, which would allow a psychotic villain like “Chopper” to roam the nation’s cities. The video version is rated NC-17, but moviegoers and video audiences may encounter an R-rated version, if CHOPPER somehow miraculously survives the dustbin of history.