"Sticking Together in Crisis" 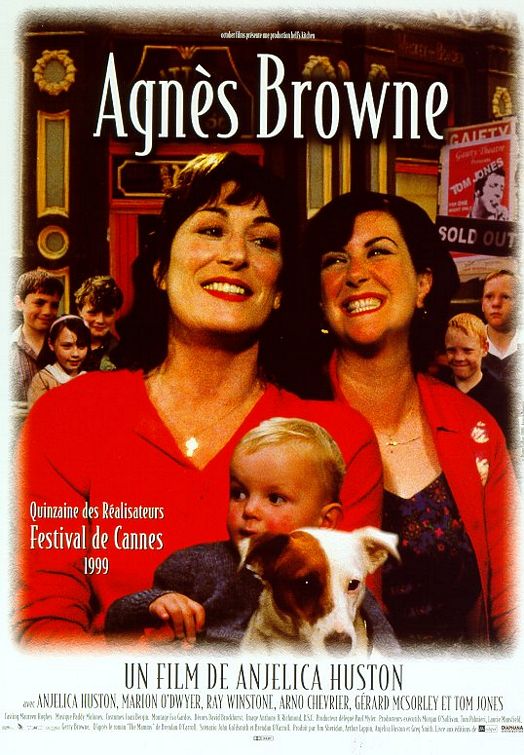 Anjelica Huston directs herself as the title character in AGNES BROWNE, set in 1967. Agnes must borrow 40 pounds to bury her recently deceased husband. With seven children to feed, her job as a sidewalk fruit salesman hardly makes ends meet, but hard work, Christian faith and the love of her friend, Marion, help her get by just fine. Her struggles in the story include talking to her oldest son about puberty and fending off a would-be suitor. When a loan shark threatens to steal her furniture, her prayer for a miracle yields help from a famous musician and hope for a better future.

AGNES BROWN is written well, with many warm, wonderful lines. Agnes goes to a church that prays the Lord’s prayer. She works hard and asks God for a miracle. When a friend dies, however, she tells her deceased friend to petition God for a miracle. Also, her culture and class allow her to swear at her children. AGNES BROWN isn’t remarkable cinema, but it is a remarkable story of love that made it to the big screen. A pleasant, feel-good movie, it is spoiled by foul language and misguided prayers.

It seems that every year, America is presented with a movie featuring a poor English or Irish family. The audience smiles at their rosy faces, adore their accents and sympathize with their woes. Examples include THE FULL MONTY and BRASSED OFF. This year, America will have an unrelenting travesty in ANGELA’S ASHES (see the review also in this issue) and also one with lots of hope and heart in AGNES BROWNE. Both are about Ireland.

Directed by and starring Anjelica Huston as the title character, AGNES BROWNE takes place in 1967. The movie starts with the middle-aged Agnes borrowing 40 pounds to bury her recently deceased husband. With seven children to feed, her job as a sidewalk fruit salesman hardly makes ends meet, but through hard work, her Christian faith and the love of her friend, Marion (Marion O’Dwyer), she gets by just fine.

Her struggles include talking to her oldest son about puberty and fending off a would-be suitor, a French baker named Pierre (Arno Chevrier). Eventually, she is able to pay off her debts, but her children establish debt of their own when they pool their money together to buy their mother a dress. Mr. Billy (Ray Winstone), the loan shark, doesn’t care that she is a widow. He threatens to steal her furniture, but a prayer for a miracle yields a result from a famous musician and hope for a better future.

This slice-of-life movie has many praiseworthy accomplishments. The script is written well, with many warm and wonderful lines given to many characters. Agnes goes to a church that prays the Lord’s prayer. She also works hard and asks God for a miracle. When her children get in trouble, she may get mad at them, but she hugs them and always makes sure they are loved. The movie isn’t directed very artfully, but rather matter-of-factly. Yet, it serves the story well.

AGNES BROWNE does have a few problem elements, however. When a friend of hers dies at one point, she doesn’t pray to God, but tells her deceased friend to petition God for a miracle. This is wrong because Jesus Christ told His followers to pray directly to God, Father, Son and Holy Spirit. Another problem is that Mrs. Browne’s culture and class allow her to swear obscenities and vulgarities at her children. Her children sometimes answer in kind, but she rebukes them. (This language is unfitting behavior for a mother, but perhaps an accurate portrayal for earthy, poor folk in Ireland in the late 1960s.)

The family constantly talks about sticking together and making ends meet together. Her oldest son gets a trade. Her community friends pool their money together and pays for his tools. It is a loving community.

AGNES BROWN isn’t remarkable in its direction or cinematic accomplishments. It is remarkable as a story of love that made it to the big screen. While ANGELA’S ASHES promises hardship upon hardship, AGNES BROWN promises and delivers hardship followed by hope. It features people who work together to correct wrongs and provide for each other’s needs. There is no dysfunction here. The only thing missing is perhaps a lack of education that would provide opportunity for better work. A pleasant, ultimately feel-good movie, it is only spoiled by some foul language and misguided prayers.