"A Failure of Imagination" 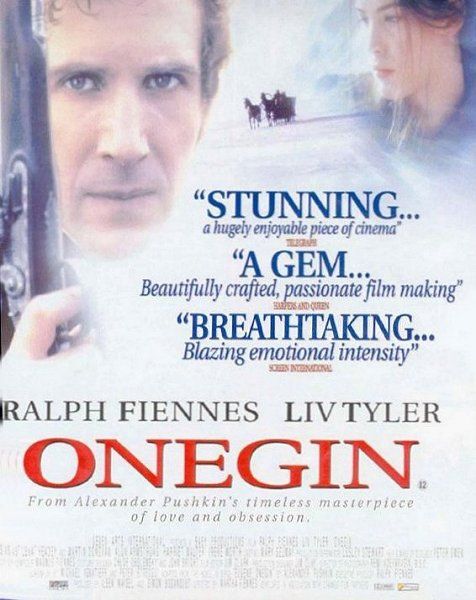 A jaded man enamored with the French Enlightenment and its Romantic worldview comes to wreak havoc in rural Russia in ONEGIN (pronounced O-Nay-Gen), a movie based on a novel set in the early 1800s by poet Alexander Pushkin. Ralph Fiennes (pronounced Rafe Fine) plays the title character, a cynical, idle Russian playboy in St. Petersburg who inherits his uncle’s country estate. Tragedy comes to Onegin when he declines to return the affections of a beautiful woman, and when he insults his friend, who’s engaged to the woman’s sister.

ONEGIN has lots of period atmosphere. Beautifully photographed, it is an artfully designed literary adaptation. The relationships between the characters are clearly defined and maintained, until the last third of the movie, when Onegin returns from a six-year exile. At that point, the source of an important change in Onegin remains unexplained. The movie ends too abruptly and melodramatically. It contains a Romantic worldview, suggesting that Onegin fails to follow that philosophy in his personal dealings with people. Onegin gets this philosophy, by the way, from the French Enlightenment of Jean Jacques Rousseau, an important precursor to Karl Marx and Adolph Hitler’s different brands of socialism

A jaded man enamored with the French Enlightenment and its Romantic worldview comes to wreak havoc in rural Russia in ONEGIN (pronounced O-Nay-Gen), a movie based on a novel set in the early 1800s by poet Alexander Pushkin.

Ralph Fiennes (pronounced Rafe Fine) plays the title character, a cynical, idle Russian playboy in St. Petersburg who inherits his uncle’s large country estate. Evgeney Onegin welcomes the chance to get away from his boring lifestyle in the city, especially when he spies Tatyana, the beautiful black-haired daughter of a widow who lives nearby. Onegin strikes up a friendship with a young man named Vladimir, who’s engaged to Tatyana’s sister, Olga. Vladimir takes Onegin to their home, where he first meets Tatyana. He finds Tatyana to be an intelligent woman with cosmopolitan interests. He wants to rent his land to the serfs, and Tatyana approves of his liberal views. He discovers she loves to read, so he recommends to her a book by French philosopher Jean Jacques Rousseau, one of the founders of the French Enlightenment which eventually led to Russian Communism and Hitler’s National Socialist tyranny in Germany.

Tragedy comes to Tatyana, Vladimir and Olga, however, when Onegin tells Tatyana that he is too realistic and cynical to return her affection. Boredom and adultery will be the end result if they marry, he confesses to her. Onegin is also honest with Vladimir about what he thinks of Olga, whom he thinks is a shallow woman. The tragedy which then occurs leads to a six-year exile for Onegin. After his exile, Onegin tries to reunite with Tatyana, but it is too late. She has already married.

ONEGIN has lots of period atmosphere. It is a beautifully photographed and artfully designed literary adaptation. Furthermore, the relationships between Fiennes as Onegin, Liv Tyler as Tatyana and Toby Stephens as Vladimir are clearly defined and maintained. Until the last third of the movie, that is, when Onegin returns from his six-year exile. At that point, the movie fails to provide any reason for Onegin’s change of heart. Onegin himself doesn’t even know. All he knows is that he now feels his life is empty without Tatyana. Shortly after this confession, the movie ends abruptly with Onegin and Tatyana going their separate ways, and Onegin left alone on the street.

Thematically, the movie seems to say that Onegin should have more courage in his romantic philosophical convictions. Those convictions are what lead him to recommend Rousseau to Tatanya and to free the 500 serfs on his inherited land. Instead of really being engaged with other people in the first part of the movie, however, he feels bored and detached from the world. His idleness has left him cynical, with no faith in man or in God, not even himself. The end result is alienation.

Such an ending sometimes can be deeply moving and rewarding, as it is in the French classic CHILDREN OF PARADISE. Here, however, it seems to leave viewers with a feeling that something is missing.

Of course, with God, people can overcome any alienation that other people or life’s tragic events often bring. It is possible that a tragedy like ONEGIN can make such a valuable point without exchanging a tragic ending for a happy one. All it takes is for an artist to imagine that it can be so.