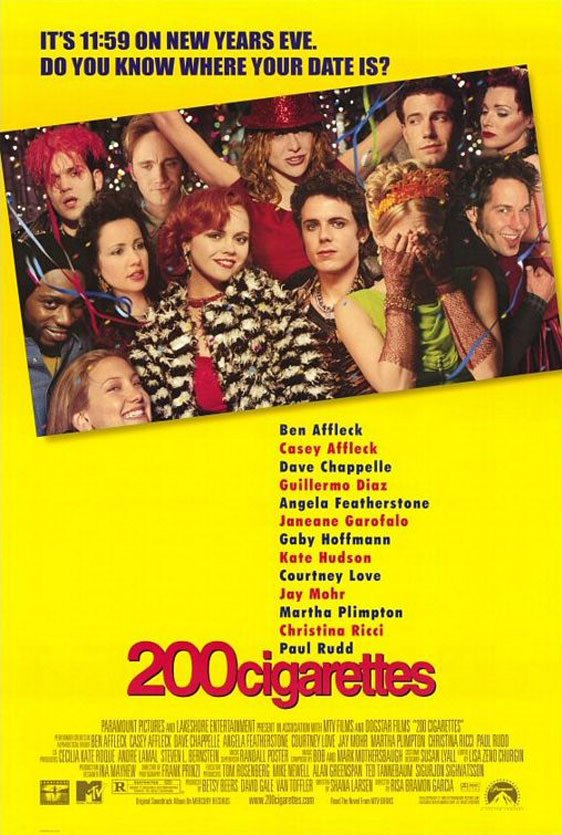 200 CIGARETTES explores the seedier elements of the 1980s. Set in New York's East Village on New Year's Eve, 1981, this morally bankrupt movie centers around various couples and friends whose lives will all intersect at a funky party in a downtown loft. Featuring drunkenness, many obscenities, sexual talk, and a quest for meaningless sex, the only good thing about this nostalgic movie is the music.

If THE WEDDING SINGER explorers the lighter side of the 1980s, then 200 CIGARETTES explores its seedier elements. Set in New York’s East Village on New Year’s Eve, 1981, this morally bankrupt movie centers around various couples and friends whose lives will all intersect at a funky party in a downtown loft. Featuring drunkenness, sexual talk and a quest on all participants for meaningless sex, the only good thing about this nostalgic movie is the music.

Lucy (Courtney Love) and her buddy, Paul Rudd, drive around New York in a taxi. He complains all the time, while she tries to cheer him up. Her plan for his ultimate surprise is to challenge him to partake in fornication in a bathroom stall. They attempt this feat, but are interrupted.

Gaby Hoffman and Christina Ricci play Stephie and Val, high school buddies who dress up and hit the town. They can’t find the party and end up hanging out with two punker fellows, Tom (Casey Affleck) and Dave (Guillermo Diaz).

Ben Affleck plays a nameless bartender who is hit on by many women including Lucy. Martha Plimpton plays a whining host of the party who drinks heavily because the only guest that does arrive on time is her former boyfriend, and worst lover, Eric (Brian McCardie). Eventually, everyone ends up at the party, but the hostess passes out and doesn’t enjoy any of it at all, including a supposed romp with then new rocker, Elvis Costello.

All the people are pathetic and uninteresting. Ricci and Hoffman are particularly grating as underage partiers with bad New Jersey accents. We are also supposed be amused at the drunkenness of the hostess, but she is very shrill and undesirable. Only Rudd seems to have some substance to his suffering. No character exudes charm, warmth or humor. Many of the laughs from this comedy stem from people falling, once into dog manure, or on top of cocktail tables, or breaking dishes. This slapstick comedy wears thin quickly.

Trying to be hip to aging Generation X’ers by adding the presence of Elvis Costello, he is underutilized and reduced into another player simply looking for easy sex. The joke at the end of the movie is to see who eventually ended up with who, while we see various couples paired off and waking up.

Certainly, nostalgic movies have a certain charm and built-in attraction, but this movie reduces the early 80’s to a big drunken sex party. Perhaps, New York was like that, but one has to believe that even so, those who indulged in such madness still had interesting personalities and occupations. These folks are cookie-cutter thin, unfunny and lost. 200 CIGARETTES can be hazardous to your funny bone, your brain and your heart.