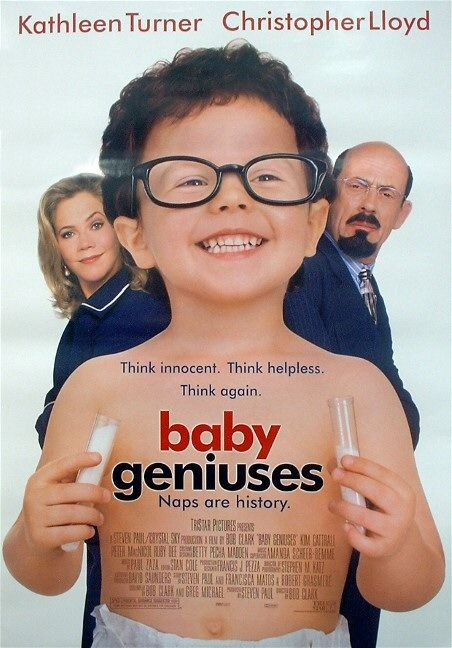 BABY GENIUSES is a strange, high-concept comedy which states that all babies are born with the knowledge of the secrets of the universe and an ability to speak with each other in their own language, baby talk. Two evil doctors try to exploit this false supposition in a movie that mixes morality, Tibetan religion and some inappropriate family material in a sophisticated, but uneven, comedy.

While understanding the stages of cognitive development has been around for decades, BABY GENIUSES is the only movie which spoofs developmental intelligence among the very young. Offbeat, a little strange, containing lots of baby jokes and cliches, some dark humor, a false-religious premise, and some inappropriate humor, this high-concept movie ultimately has a mild moral worldview of loving and protecting family.

Kathleen Turner stars as Dr. Elana Kinder, a scheming, wildly ambitious boss at BABYCO, and the world’s largest manufacturer of baby products. She is so successful, she has created an indoor amusement park for babies called JOYWORLD. The public does not know, however, that she also funds a secret research lab together with her partner in crime, Dr. Heap (Christopher Lloyd). (Together, the pair seems just like a diabolical duo from a BATMAN movie.) They work to crack the code of baby language which she is sure does exist. Her assumption is in line with a Tibetan Buddhist premise that, until the age of two, babies hold universal knowledge, but lose that knowledge when they develop intelligible speech. Hence, if the baby language could be understood, then so could the answers to some of the major questions of the universe.

Naturally, with a PG rating and a baby-filled plot, families would think that this movie is great for all ages. However, the PG rating should be a warning. There are a number of cautions to note. First, Sly tells Dr. Kinder that she is talking out of her “hind end” but Sly actually uses the “A” word. On a few more occasions, the babies use mild obscenities. Secondly, scatological humor abounds, especially about dirty diapers and burping. Furthermore, Sly dresses up in girl baby clothes as a disguise and makes jokes about dressing in drag. The biggest caution is the false-religious premise. Of course, babies don’t hold universal knowledge. Parents may also be concerned about the villains, their goons and some of the slapstick violence.

BABY GENIUSES does have some moral content. Ultimately, the movie states that parents should raise their own children, and even if babies did hold universal knowledge, it is best if they keep that knowledge to themselves. Sly’s father tells his mother to “pray for me,” and in another scene Christian Christmas songs can be heard.

BABY GENIUSES is sort of like a HOME ALONE, the early years. Though not quite as slapstick based, nor as cleverly written, it aims for the same crowd. However, the strange premise, some of the action and some of the language prevent this from being a movie the whole family can enjoy.