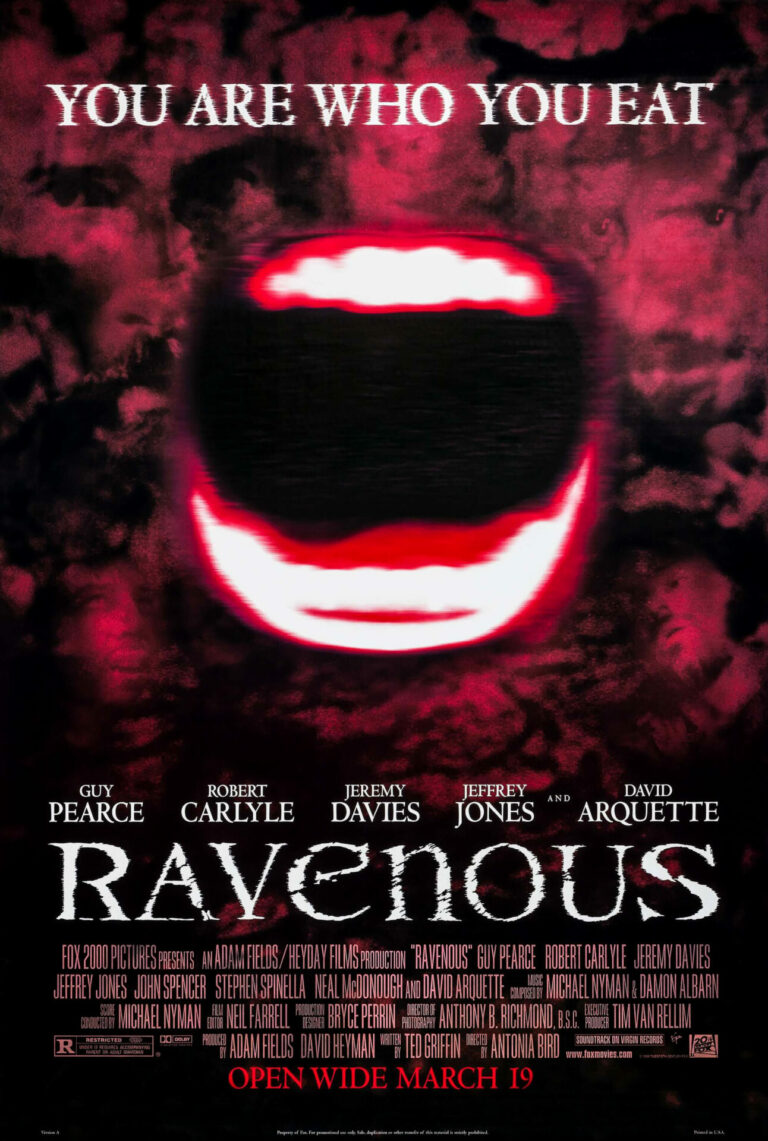 RAVENOUS poorly explores cannibalism as a period horror film. Based in part on a true story of a western-bound band of 1840's travelers stranded in a cave and forced to consume the dead in order to survive, this movie is poorly written and spitefully executed, with glib, offensive humor and an inappropriate score. It is also filled with violence, blood and some anti-Christian elements.

RAVENOUS is a pitiful and anti-Christian treatment of cannibalism. Based in part on a true story of a western-bound band of 1840’s travelers stranded in a cave and forced to consume the dead in order to survive, this movie is poorly written and spitefully executed, with glib, offensive humor and an inappropriate score.

Guy Pearce, who had a brilliantly written role in LA CONFIDENTIAL, grunts his way through this movie set in the American West during 1847, as Capt. John Boyd. Boyd participated in an act of cowardice during the Mexican-American War, and is banished to a desolate military outpost in the barren icy Sierra Nevada mountains in California. The post includes a small motley group of soldiers who have either given up on life, or have numbed it with alcohol and/or peyote.

In the dead of winter, a stranger, Colquhoun (Robert Carlyle, from TRAINSPOTTING and THE FULL MONTY), appears at the post, frost-bitten and half-starved. After he recovers, he tells the others about his failed cross-country trip, where he had to eat his deceased co-travelers as a result of being snowed into a cave. Colquhoun suggests that others might be alive in the cave, so Boyd and the other soldiers stage a rescue mission. At the cave, they discover that all are dead, Colquhoun ate them all. Colquhoun then changes personality into a lunatic and begins a killing and eating spree, until a showdown with Capt. Boyd at the very end.

RAVENOUS is filled with spiritual and moral depravity. Colquhoun goes on a ravenous rage because he is following the Indian myth called Weendigo, which states that a man who eats the flesh of another steals that person’s strength. (This is similar to the vampire myth of drinking another’s blood, and the parallels are ever present.) The myth is validated by apparently manifesting to be true in Colquhoun’s case. Of course, violence, blood and corpses are ever present, as are limbless torsos and other body parts.

The pastor of the outpost, Toffler (Jeremy Davies), is conceived as weak and ineffective. The others interrupt his prayers, and the outpost’s commanding officer, Hart (Jeffrey Jones), frowns on Toffler’s hymn singing. Toffler is one of the first to be killed and eaten. The villain justifies his cannibalism by stating that Christians eat the body and blood of Christ every Sunday.

The characters in the movie ALIVE were very conflicted about their cannibalism and only did it to survive. They prayed continually to God for rescue and asked God for forgiveness in the event they were doing something wrong. RAVENOUS is glib and mocking about this serious issue.

This movie aspires to be a high-end horror flick with a hip cast such as Pearce, Davies and David Arquette, set in the old West. However, the writing often reduces to the kind of stupid one-liners that can be found in many of today’s worst horror movies. Also, bad, inappropriate techno-music soundtrack screams that this is a movie for mind-numbed, morally mixed-up males. The gothic period setting of FRANKENSTEIN and DRACULA enhances the mystique of the horror, while the old west setting of RAVENOUS is reduced to Indian stereotypes and contemporary Hannibal Lector villains dressed in pre-Civil War garb.

In other words, RAVENOUS bites!