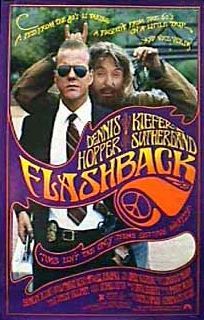 After two decades underground, Huey Walker, a notorious 1960s radical prankster, is under arrest, so the system finally has a chance to settle the score. John Buckner, the FBI’s most promising rookie and a solid citizen of the 1980s establishment, is assigned the job of making sure that Walker shows up in court. Armed with bureau training and a gun, Buckner takes his job seriously and believes in playing by the rules. He is contrasted with Walker, who packs a subversive sense of humor and has a knack for making anyone in authority look foolish.

The assignment to transport Walker from prison in San Francisco to Spokane, Washington via train seems simple enough until Buckner learns how hazardous a generation gap can be. Over the next two days, Buckner has his identity stolen, his freedom taken away, and his career destroyed — all thanks to Huey Walker. When the two are thrown off the train, they are pursued by ruthless Sheriff Hightower, but Buckner takes Walker to the commune where Buckner grew up.

They encounter Maggie, an aging flower child still living on the commune who never relinquished her 1960s ideals. She shows them a home movie of Buckner as a child (whose real name we learn is “Free”) living happily on the commune. Buckner begins to cry, decides to quit the FBI and lets Huey go free.

The mechanism that moves the premise along is the “flashback”, a term normally used, particularly in Huey’s case, to describe the sudden, uninduced state of hallucination that was the after effect of taking LSD. However, in Buckner’s case, his flashback is to the nostalgia of the 60s which leads him to revisit those past hopes and lost expectations that have been repressed in his life. Thus, the film’s premise informs us that happiness comes from accepting who you are by coming to terms with your past and recapturing the innocence of youth.

This perspective negates the process of maturation which is necessary for us to grow into the men and women we were created to be. A person who is trapped in the solipsism of youth is not free, but spiritually retarded. Repressing vain expectations and developing the cognitive structures to deal with the complexities of life enhances, rather than impedes, our happiness.

The film also presents two yuppies with fond memories of the 1960s, thereby insinuating that all people, no matter how much they align themselves with the establishment, secretly yearn to be rebels. Thus, the film utters a distant cry for social change. It should be noted, though, that changing the social structure is at best only a very brief transient solution, since the problem of sin remains. However, thanks be to God for his son Jesus Christ! “He is the one who turns aside God’s wrath, taking away our sins, and not only ours but also the sins of the whole world” (1 John 2:2).

Furthermore, when we are delivered from our rebellious sin nature by the saving grace of Jesus Christ, we come to understand the wisdom and joy of obeying God’s command in 1 Peter 2:13 to: “Submit yourselves for the Lord’s sake to every authority instituted among men.” The emphasis on rebellion over obedience in this film’s attempt to turn back the clock to the 60s indicates the adolescent immaturity of the filmmakers.

While the film is at times engaging, entertaining and thought-provoking, the laughs are hollow and the one-liners feeble. Moreover, the needless spewing of profanities and obscenities will alienate Christian viewers. There is also prostitution, violence and drunkenness. Recommendation goes against seeing film.