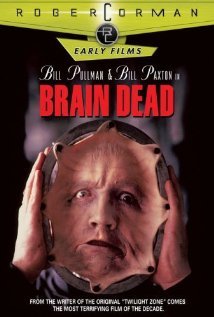 Profanities and obscenities; nudity; and, blood and violence.

Dr. Alex Martin, a research scientist, finds himself in a vulnerable position when critical brain specimens are destroyed by his clumsy assistant. Jim Retin, long-time friend and high-level executive from the Eunice Corporation which backs Martin’s research, subtly blackmails Martin into experimenting on a “live” specimen. The “specimen,” it turns out, holds a secret mathematical formula captive within his brain, and the Eunice Corporation wants the formula or its destruction. In Martin’s words to Retin, “What you’re saying is that you want him brain dead,” thus the title of this tedious film.

The pressure brought upon Martin that threatens to close down his research unless he complies with Retin’s wishes causes him to act irrationally. Leaving his research lab with a brain in a jar, he is confronted by a derelict who thinks the brain is his own. A struggle ensues, then a car hits Martin, destroying the brain specimen and sending Martin into a world of unconsciousness where paranoia and schizophrenic episodes are birthed in his mind. A series of wild dreams, confusion and juxtaposition of characters follow. The film ends with Martin’s death observed by his wife and “friend” Retin.

The movie is a “no see” for three major reasons. It gets the lowest rating for quality of production or acting. It is evil in content: vivid sexual scenes with nudity; obscene and profane language; and, blood and violence. Most of all, the continuity requires that the viewer be “brain dead” to enjoy it.

Avoid BRAIN DEAD. Instead meditate on: 2 Tim 1:7: “God hath not given us a spirit of fear, but of power, love and a sound mind;” and, Isaiah 26:3: “He will keep you in perfect peace whose mind is stayed on Him.”