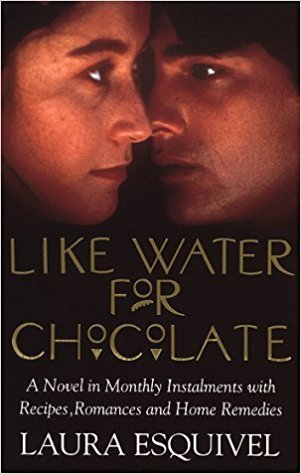 The Mexican film LIKE WATER FOR CHOCOLATE, set near the Texas border, opens with the birth of Tita, the youngest of three daughters, who, because of her family position, cannot marry the man she loves. LIKE WATER FOR CHOCOLATE is a humorous fairy tale with exquisite cinematography marred by implied sex, full-female-frontal nudity, slight violence, superstition, and witchery.

The Mexican film LIKE WATER FOR CHOCOLATE is a humorous fairy tale with exquisite cinematography. It is set in the late 1800’s at the time of the Mexican Revolution. Mama Elena gives birth to a daughter, Tita. Nacha, the loving and gentle cook and nanny, nurses Tita and makes a little spell so that Tita will attract the love of a young man who will instantly want to marry her on her sixteenth birthday. Mama Elena, sixteen years later, resolutely refuses to give young Pedro permission to marry Tita. The youngest daughter, by tradition, is bound to take care of her mother for the rest of her life. In desperation, Pedro agrees to marry the older, uglier sister, Rosaura. Tita must care for her mother and do all the cooking. Her food, like Nacha’s, possesses special powers. Dr. John Brown falls in love with Tita. However, Tita risks the security and peace she has with John for a night of adultery with Pedro.

Bits of superstition and fairy-tale magic are scattered throughout LIKE WATER FOR CHOCOLATE. Pedro and Tita do not warrant any respect or sympathy. Furthermore, Elena showed absolutely no trust in God for her future, and Pedro only called on God to help him avoid consummating his marriage. They could not surrender their self-wills. The film is further marred by implied sex, full-female-frontal nudity, slight violence, superstition, and witchery.