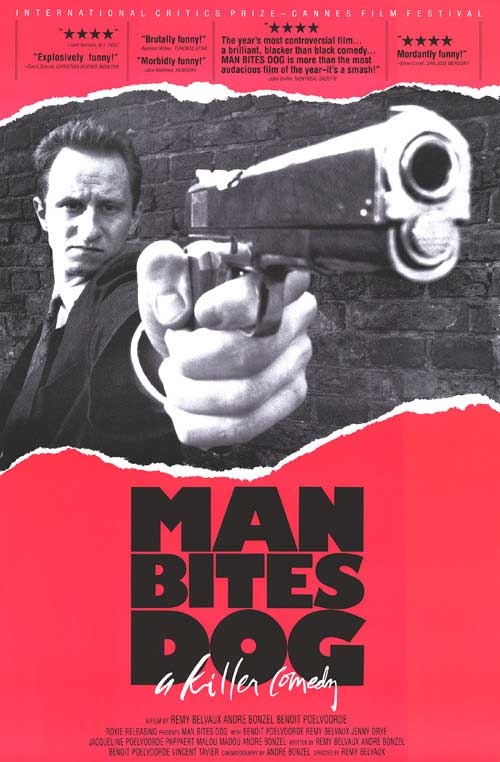 MAN BITES DOG is an excessively violent black comedy. A mock documentary, it portrays a serial killer who goes about his murderous business while chatting to the camera. While attempting to make a point about media irresponsibility, this film is an exercise in poor taste which becomes that which it is criticizing. The message is definitely not worth the nauseating price.

The intensely violent, ultra-low budget MAN BITES DOG goes to the edge and then WAY over it. This grainy black and white mock documentary follows Ben, a cocky serial killer on his murderous outings. The gag is that the crew are so “objective” that they treat him as though he were a respectable citizen. We meet his family and friends and listen to his chatter about architecture, poetry and the ballast needed to sink bodies in a quarry. All the while Ben shoots, beats, strangles, and robs countless victims, frequently without missing a beat in his conversation. As Ben’s acts of violence become more shocking, the filmmakers more actively cooperate with him. In the most nauseating sequence, Ben bursts in on a couple. All of them rape the woman, and then Ben kills them both. Eventually, an enraged relative of one victim guns both Ben and the crew down, leaving the camera running on the floor.

While attempting to make a point about media irresponsibility, the line between the film and what it is criticizing disappears, leaving only numbness and nausea. This exercise in excess may become popular on the midnight movie circuit, but its message definitely isn’t worth the price.