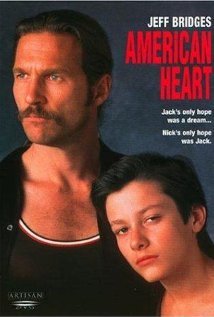 AMERICAN HEART is a tough, difficult character study of an ex-convict and his adolescent son who desperately need to support one another but don't know how. It is also another hard look at life on the streets from the director of the intense 1985 documentary STREETWISE. There is a tenuous sense of redemption in the film's final moments, but this film is definitely not recommended for the young or the faint-hearted.

In its compelling depiction of street life, AMERICAN HEART tells about Jack (Jeff Bridges), a jewel thief who is just leaving prison. At a bus depot, he is surprised to find his adolescent son Nick waiting to join him. Nick intends to live with his father, but Jack attempts to ditch his son. No such luck, and the two are bound for Seattle on a bus. Jack grinds through his work days and successfully woos Charlotte, a local cab driver. The local school won’t admit Nick without transcripts or immunization records, and the streets offer only drinking, fights, crime, and prostitution. He is attracted to Molly, but her mom–a very tired and short-tempered “exotic dancer” in a peep show–has created a home atmosphere which virtually guarantees that Molly will become a prostitute. As the going gets tougher, Nick becomes interested in easy money. This leads to a disaster which jolts Jack into the tough realization that both he and Nick are going to have to support each other, in order to build any sort of decent, orderly life.

AMERICAN HEART is no walk in the park. The film’s look is lean, tough and realistic. Tracey Kapisky, who plays young Molly, was literally recruited off of the curb on Sunset Blvd. in Hollywood. Jack challenges a viewer’s compassion and patience. There is a tenuous sense of redemption in the film’s final moments, but this film is definitely not recommended for the young or the faint-hearted.