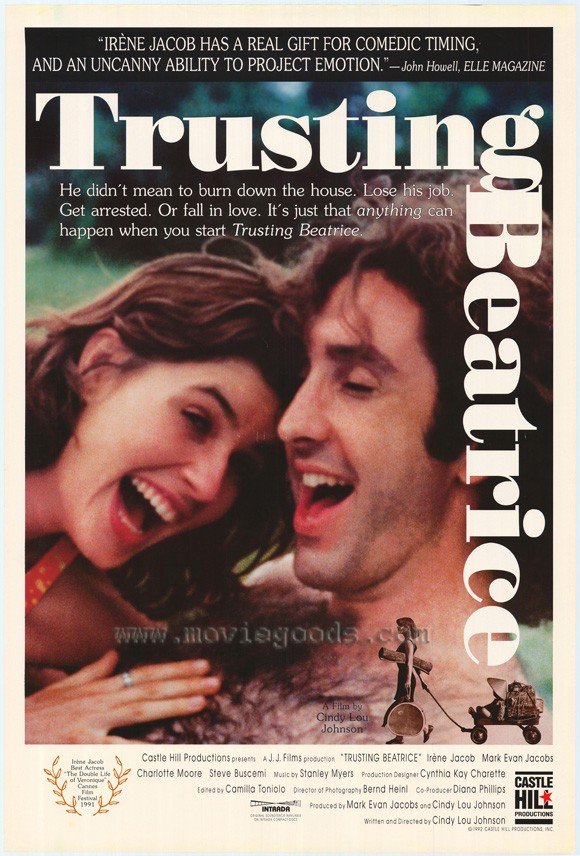 TRUSTING BEATRICE is a low-budget film about a confused New England landscape architect who is transformed when he meets his true love in the person of a French vagrant named Beatrice. Although there are a few positive aspects to this disjointed film, the movie has few moral bearings and wanders aimlessly through an uninteresting story about a totally bored and boring fellow.

In this 1990’s low-budget, hippy-lifestyle revisited, movie entitled TRUSTING BEATRICE, we meet 26-year-old Claude Dewey, a confused New England landscape architect, hanging over a cliff of self-doubt on a shaky limb. However, when Claude meets a street vagrant from France, Beatrice De Lucio, his life is transformed. When Claude inadvertently sets fire to his house, he renders himself and Beatrice, a beautiful and compelling young French woman, and Seap Sok, a traumatized five-year-old Cambodian orphan, homeless. In a complex act of guilt, compassion and attraction to Beatrice, he invites them to stay at his parent’s house until things get sorted out. Beatrice and Seap are thrilled to accept Claude’s hospitality, never imagining what quirky characters comprise the Dewey menage. However, with Beatrice and Seap in residence, the Dewey household undergoes some startling and remarkable changes.

Although there are some positive aspects to this disjointed film, such as Beatrice introducing the Dewey’s to prayer and their ultimate commitment to marriage, the movie has few moral bearings and free love and the hippy lifestyles of the 60s seem to be extoled as a model for imitation. Furthermore, the script is extremely weak, and the direction wanders aimlessly through the uninteresting story about a totally bored and boring fellow. What’s worse is the casual acceptance of lying as a way to cope with life. In the final analysis, TRUSTING BEATRICE is a forgettable movie which has no future at the box office or in the video store.

Rating: Not yet rated, but probably PG-13