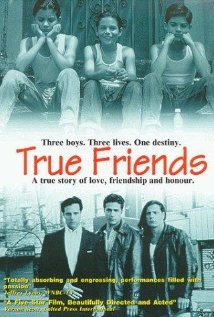 A story of friendship enduring the pitfalls of life, TRUE FRIENDS chronicles the lives of three boys living in an Italian neighborhood in the Bronx, New York. The movie shows the trio gambling, lying and stealing their way into adulthood in a “boys will be boys” fashion. Together, they separate from parents, celebrate marriage, weather a drug addiction, and mourn one’s untimely death.

The language in TRUE FRIENDS is excessive, and racial slurs are used to portray characters’ prejudices. The movie shows the boys praying to God, but there seems to be no real effect on their lives. Joey agrees to marry his live-in girlfriend after 15 years only because she becomes pregnant. Also, Joey and J.J. take Louie out to find a prostitute to perform a deviant sex act. Finally, all three are involved in drinking, gambling and carrying money for a bookie. In fact, they make a good deal of their income from illegal activities. Thus, TRUE FRIENDS, although successfully depicting the importance of standing behind one’s friends, morally self-destructs because it provides no redemption and it advocates solving life’s problems with more sinful transgressions. It also is telling an old story that has already been worn out by the movie industry.

When Juan Jose Garcia (Rodriego Botero) moves to an Italian neighborhood in the Bronx with his single mother, he doesn’t know what to expect. After enduring schoolyard bullies and racial slurs, what he finds are two “True Friends” for life.

TRUE FRIENDS, a coming-of-age story of love and friendship, portrays three boys growing up in an Italian neighborhood in Bronx, New York. Though initially an outsider due to prejudice, the Puerto Rican Juan Jose, or J.J. for short, soon becomes buddies with Joey (James Quattrochi) and Louie (Loreto Mauro) after they rescue him from playground bullies. From that day forward, they do everything together: play stickball, go to “Tar Beach” (the roof of their tenement with buckets and hoses), steal chickens, and taunt the mustachioed woman living in their building.

As children, the three boys share a dream of opening a bar together. Joey begins working in a bar, Louie makes pizzas in his father’s restaurant, and J.J. delivers newspapers. Despite their work, they are unable to save the necessary funds since they spend or gamble their money away as quickly as they earn it.

In adulthood, Louie continues his pizza-baking, while Joey serves as a “bookie” for Big Tony, a loan shark. The three friends continue their habits of earning, spending and having fun, with their dream only a distant possibility.

The trio grows in work and relationships until joy and heartache intermingle on Joey’s wedding day. The wedding of these 15-year sweethearts is a celebration prompted by the fiancee’s pregnancy. The event is marred, however, as Joey discovers that J.J. has taken up using cocaine “on occasion,” a habit he has picked up from his cousin Carlos who still lives in J.J.’s old neighborhood, Spanish Harlem. J.J.’s drug problem progresses to heroin, and J.J. steals from Big Tony to fund his habit. J.J. has to be rescued by his two friends again, this time not from playground bullies, but rather from the bully of heroin. They trace him to a flophouse where he has been shooting up for two days straight, and, while there, they help guide him on the road to rehabilitation.

Though they age and progress through work and relationships, their stronghold of friendship remains. Tragedy strikes, however, when Joey discovers he has a terminal brain tumor, “forcing” him to steal $100,000 from Big Tony to establish the bar and provide for his wife and child. The end is used to justify the means, and the bar finally opens for New Years Eve, heralded as a success for the trio and their families.

TRUE FRIENDS seems to be a personal endeavor for filmmakers Quattrocci, Botero and Mauro. They did an amazing job of making a full-length feature as convincing as this with only a $100,000 budget. They did a good job of portraying the more seedy side of life in the inner city. Regrettably, the film doesn’t fully overcome the immorality depicted in its story.

The love between the three boys-to-men is excellently portrayed and at times brings tears to your eyes. Their friendship is a life-long bond that calls each of them to sacrifice for the others but includes a lack of moral underpinnings in each of their lives that allows the whole group to live teetering on the edge of self-destruction.

The language in TRUE FRIENDS is excessive. A more disturbing aspect is the use of racial slurs to portray characters’ prejudices. The movie shows the boys praying to God about the issues in their lives, but there seems to be no real effect on their lives as a result of their prayers. For example, Joey agrees to marry his live-in girlfriend after 15 years only because she becomes pregnant. Also, Joey and J.J. take Louie out to find a prostitute to perform a deviant act on him in the car while they moon him from the sidewalk. Finally, all three are involved in drinking, gambling and carrying money for a bookie and loan shark. In fact, they make a good deal of their income from these illegal activities, and, as mentioned above, end up stealing money to open their bar and fulfill their dreams of economic success.

Thus, TRUE FRIENDS, although successfully depicting the importance of standing behind one’s friends, morally self-destructs because it provides no redemption and it advocates solving life’s problems with more sinful transgressions. It also tells an age-old story that has already been worn out by the movie industry – life in the Italian community in the Bronx.