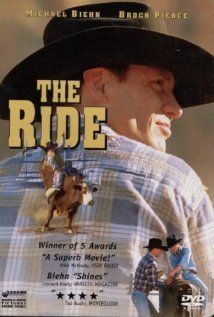 THE RIDE is one of the best crafted movies from World Wide Pictures. Smokey Banks is a rodeo champion whose carousing has taken him out of the winner's circle. When Smokey fails a bull ride, gets beaten up for a loan, has his trailer repossessed, he explodes and goes and knocks out the tow truck driver who is taking his trailer. Eventually, he is thrown in jail. One of his fans, young Brock Pierce from the Saguaro Boy's Ranch for orphaned and troubled children, convinces the police to have Smokey serve his sentence at the ranch. Though Smokey wants no part of this, he becomes involved in the life of Brock who is dying of cancer. Eventually, Smokey has to deal with God and his disappointment with himself.

THE RIDE is a captivating story. These people are real in a very profound way that Hollywood seldom captures. The dialogue is sparse and well written. The acting is captivating. Unlike older Billy Graham films, the tent prayer meeting at the rodeo with Franklin Graham is not the end of the story. The premise is played out and the story is told in a way that will fulfill the audience's expectations and help them to know God.

(CCC, A, D) Christian worldview with evangelism - a morality tale; a couple of fight scenes; drinking; smoking; and, playing cards.

World Wide Pictures is the motion picture arm of the Billy Graham Evangelistic Association. Over the years, World Wide Pictures has produced and released some excellent films including THE HIDING PLACE and THE PRODIGAL. Of course, they have also produced some films that were not so remarkable, but their new theatrical movie, THE RIDE, is one of their best.

Smokey Banks (Michael Biehn who played in THE ROCK, TOMBSTONE and THE TERMINATOR) is a rodeo bull riding world champion whose face is prominently displayed on billboards and in advertisements for salsa (hot sauce). Although he won’t admit it, he has passed his prime, and it is clear to others that his drinking and carousing have gotten to him.

When young Brock Pierce (Danny O’Neil who play in THE MIGHTY DUCKS) from Saguaro Boy’s Ranch for orphaned and troubled children cheers for Smokey at a local rodeo, Smokey fails miserably. Brock tries to encourage Smokey afterwards, but Smokey is in no mood for compassion or advice. Later, Brock surreptitiously sees Smokey being beaten up by two thugs for repayment of a loan.

When Smokey goes outside, he sees his trailer being towed away. Smokey goes after his trailer, knocks out the tow truck driver, takes the truck, and, eventually, gets caught and thrown in jail. Brock talks the police into having Smokey serve his sentence at the Saguaro Ranch.

Smokey wants no part of this. This is a Christian ranch and he doesn’t believe in God. He doesn’t like children, and he wants to get back to his life of carousing. However, as he works with the children, he begins to take an interest in them, especially Brock, who is dying of cancer and has only one wish that Smokey will teach him to ride a bull.

At one point, Smokey leaves the ranch and gets into a brawl. He is hauled back. At another point, he is chastised for teaching the children how to gamble. Some of the more mischievous boys actually gamble with him, and Brock gets upset and decides to confront Smokey by playing him in one last hand for all or nothing ( if Smokey wins, he gets his freedom; if not, he promises to go to the chapel service after the upcoming rodeo. Eventually, Smokey has to deal with his feelings of anger that God would let a little boy like Brock die, his feelings of confusion and his disappointment with himself.

THE RIDE is a captivating story. These people are real in a very profound way that Hollywood seldom captures. The dialogue is sparse and well written. The acting is captivating. Unlike older World Wide Pictures movies which end with a Billy Graham crusade, the tent prayer meeting at the rodeo with Franklin Graham is much more subtle and not the end of the story. The premise is played out and the story is told in a way that will fulfill the audience’s dramatic expectations and help anyone who sees THE RIDE to get closer to God who is The Answer to all our problems. Containing some action violence, drinking and gambling, this redemptive story gives a clear evangelistic message. THE RIDE will grip you until the very last moment, and World Wide Pictures deserves our thanks.