"A Boy’s Home Is His Castle" 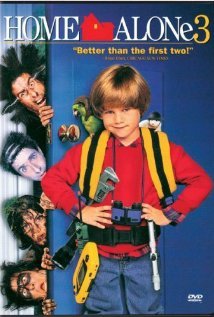 HOME ALONE 3 uses the same elements as the first two movies to construct an entertaining movie. 8-year-old Alex Pruitt comes down with chicken pox. Meanwhile, four spies steal US stealth technology and place the stolen chip in a toy car to sneak it by airport x-ray machines. By mistake, Alex’s neighbor, Mrs. Hess, picks up the bag with the toy, and so the chase begins. Back home, Mrs. Hess finds the toy and gives it to Alex. Alex notices the thieves searching the neighborhood but by the time the police arrive, the thieves have left. The police caution Alex about false alarms. When it is clear that the thieves are coming to his house, Alex arranges to inflict pain on these smugglers: after all, it’s his home, and he’s going to protect it.

The sight gags in HOME ALONE 3 are well executed, but some of the slapstick violence goes too far. Although protecting our home, honesty, compassion for the elderly, and other good values are presented in this movie, many people may complain that the gags are too scatological and painful. HOME ALONE 3 may be dynamite entertainment for young boys of all ages, but the painful gags may wear thin on parents.

(B, L, VV, S) Moral worldview with some redemptive elements; 3 borderline exclamatory profanities; constant slapstick violence from electrocution which blows the seat of a man’s pants off, falling into freezing pool, numerous other falling gags, objects hitting people in the head, spray painting eyes, & many hits to the groin; and, suggestive bathing suit posters in boy’s room & some very mildly suggestive sexual gags.

The HOME ALONE series has tapped into a very live nerve by focusing on the threat, real or imaginary, that children feel when home alone because a safe shelter is one of man’s four primary needs. The third episode of the HOME ALONE series uses the same elements as the first two movies to construct a very fast paced, entertaining movie.

8-year-old Alex Pruitt comes down with chicken pox. Since his father has to travel frequently and his mother works, it is clear that he is destined to be the next little boy who will be left home alone. While Alex is contemplating his condition and getting into mischief because of his fertile imagination, a group of high-level industrial spies are stealing US stealth missile technology for sale to the enemies of freedom. This stealth technology will render any missile invisible. Clever spies that they are, the four thieves place the stealth missile’s chip into a remote controlled child’s car to sneak it by airport x-ray machines. Predictably, Alex’s neighbor, Mrs. Hess, picks up the wrong shopping bag, and the thieves get through the x-ray machine to find themselves stuck with San Francisco Sour Dough bread. Thus, the chase is on for them to recover this valuable chip. If they don’t, their lives will be at the severe mercy of the Asian Mafia that paid for the chip. Of course, the US Air Force has an interest in recovering their chip, and so Air Force agents are chasing the thieves.

Back home in the suburbs, apparently straight-laced and unbearably stuffy Mrs. Hess finds the toy car and gives it to Alex in payment for shoveling the snow from her driveway. The next day, when he is left briefly home alone he notices the thieves sneaking around another neighbor’s house. By the time, Alex calls the police, the thieves have already made their getaway. The police do not believe Alex about the thieves and caution him about false alarms. Determined to vindicate himself, Alex calls the police again when he sees the thieves at another house in the neighborhood. Again, the police miss the thieves, and Alex is given a very stern lecture about false alarms. Thus, the story set up is complete: Alex will be left home alone again when his Mom goes to work, and the police will not respond to his calls for help.

Alex realizes that the thieves are searching every house on the block. When it is clear that his house is next, he goes about booby-trapping it to inflict the ultimate pain and embarrassment on these would-be international smugglers. As Alex says, it’s his home, and he’s going to protect it.

The humor, the pacing and the sight gags in HOME ALONE 3 are very well executed. The direction is precise, and everything serves the plot. There are even touching moments, especially at the end where love abounds and Alex is vindicated. This is well-crafted entertainment, but some of the slapstick and pointedly scatological violence makes HOME ALONE 3 a more enjoyable experience for little boys of all ages, than for little girls, who may prefer the romance of ANASTASIA. One little girl in the preview audience was not nearly as amused by the punches to the groin area and other physical gags as the boys who were laughing hilariously. Although protecting our home, honesty, family, loyalty, compassion for the elderly, and all sorts of other good values are built into this movie, many moral Americans may complain that the gags are too scatological and based on pain. There is frequent mention of the word “butt”, and the movie is carefully crafted to come close to offensive sexual material at two points. Thus, in the final analysis, HOME ALONE 3 may be dynamite entertainment for young boys of all ages, but the painful sight gags may wear thin on parents and little girls.