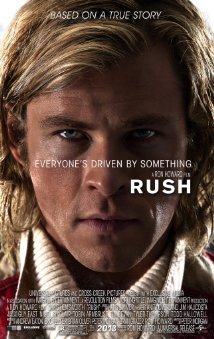 RUSH is about two Formula One drivers, Niki Lauda and James Hunt, who become intense rivals in the 1970s. Niki and James could not be more different. Niki is Austrian and is focused completely on winning, while James is a playboy who follows his emotions. When an extremely pivotal dangerous race comes to play, the two are up against each other once again.

RUSH is very entertaining but has two main characters. The viewer isn’t sure which character to support. Both characters have positive and negative traits. Therefore, there is no good guy or bad guy. RUSH also has conflicting worldviews. James Hunt is a romantic. He follows his emotion and feelings in the moment. There are some ramifications of this, but overall the movie seems to glorify his playboy image. Niki, however, has a humanist worldview. He thinks he can modify the outcome of his life through his own actions. Despite this, Chris Hemsworth and Daniel Brühl both do a very good job. Ron Howard is a great director, but RUSH’s message is not something Movieguide® would like to promote.

(PaPa, HH, RoRo, LLL, VVV, SS, NN, AA, DD, MM) Strong mixed pagan worldview with strong Romantic and strong humanist elements where man tells priest to “f off” because he believes he can make it on his own rather than with prayers while another character follows his emotions and constantly “goes with his gut”; at least 40 obscenities (including 16 “f” words) and eight profanities, plus man vomits several times; very strong and strong violence includes several men die from race car driving, man is burning in a fire after crashing, his face gets burned off and flesh is removed, medical spatula goes down a man’s throat for a medical procedure, and main character beats up another man; strong sexual content includes implied affair, several threesomes, fornication outside of marriage, crude gestures; upper female nudity, upper male nudity; drinking, drunkenness, and alcoholism; smoking and marijuana use; and, lying, cheating.

Formula One drivers, Niki Lauda and James Hunt, are intense rivals who striving for the championship, in RUSH. Set mostly in 1976, RUSH has a mixed worldview. One character has a Romantic attitude while another character promotes humanism.

James Hunt is the ultimate English playboy. All he lives for is partying, women and driving. His biggest driving competition is the Austrian driver Niki Lauda, who is his complete opposite. Niki is very driven, completely focused on getting the job done and having nothing stop him in the way. In fact, Niki is so passionate about racing that he even denies working for his father’s company, leading his father to disown him.

Niki and James are becoming better and better racers, leading up to Niki receiving a sponsorship from Ferrari. James isn’t so fortunate. His party lifestyle has given him a bad reputation, but ultimately he also is able to get a sponsorship. James’ image is revived when he marries, giving the image of settling down, but James continues to have affairs. It doesn’t take long for his wife to realize James is too self-centered, and she leaves him.

Rising to the very top, Niki has become a force to be reckoned. Everything he does is for winning the race. He evens questions personal happiness as being distracting. When an extremely pivotal race comes to play, with a very dangerous course, the two are against each other once again.

Despite this, Chris Hemsworth and Daniel Brühl both do a very good job. Ron Howard is a great director, though the film’s message is not something MOVIEGUIDE® would like to promote. The time period is depicted in a very realistic manner.

RUSH also has two different worldviews, Romantic and humanist. Both lead characters have clear beliefs and are continuously fighting each other about those standpoints. James Hunt is a romantic. He follows his emotion and feelings in the moment. There are some ramifications of this, but overall the movie seems to glorify his playboy image. Niki, however, has a humanist worldview. He believes he can modify the outcome of his life through his own actions. Niki completely relies on his own ability and literally tells a priest to “F off” because he will make it on his own.

Because of its worldview problems, foul language, and some lewd content, MOVIEGUIDE® rates RUSH as unacceptable viewing.