"A Riveting Take on a Horrifying Event" 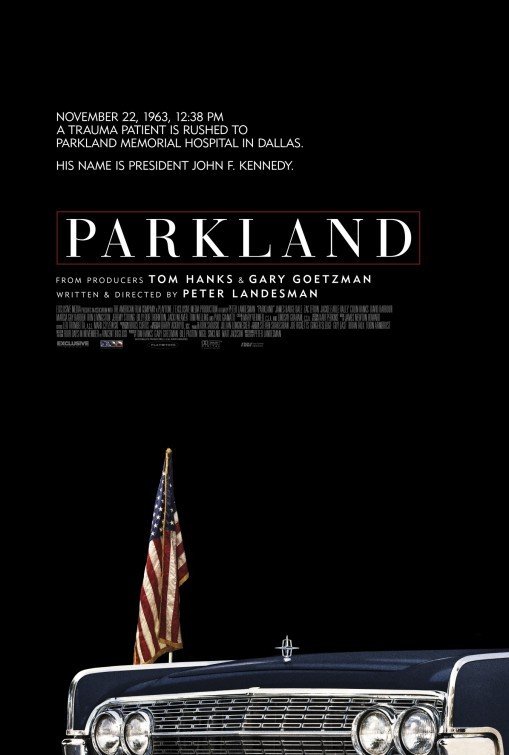 PARKLAND is a historical drama about the immediate events surrounding President John F. Kennedy’s assassination in 1963. It focuses on several people affected by the event. They include a traumatized stranger who filmed the assassination on his 8mm camera, the young doctors at Parkland Hospital, a secret service agent, and the brother of the shooter, Lee Harvey Oswald.

PARKLAND is engrossing and sometimes very moving. The intense sequences preceding the assassination evoke a considerable amount of concern and empathy. Visceral in tone, PARKLAND succeeds at placing the viewer in the middle of the chaos. However, the audience doesn’t get close to the people experiencing the chaos. The movie merely shows the surface emotions of the real life characters it portrays. PARKLAND does have a strong moral worldview, with Christian, patriotic themes. The Secret Service shows respect and honor toward the President, and strangers exhibit kindness to Jackie Kennedy. After Kennedy’s death at Parkland Hospital, a nurse places a crucifix on his chest and a priest prays over the body. That said, MOVIEGUIDE® advises caution for PARKLAND due to strong foul language and violence.

(BB, C, PP, AC, LL, VV, N, D, M) Strong moral worldview with people that act ethically, nobly and honorably in a difficult situation, a nurse places a crucifix on Kennedy after his death and a priest prays over his body, plus strong patriotic values of Secret Service men who put their lives on the line to protect their President, and it’s mentioned that the assassin is a Marxist or communist; 16 profanities and five obscenities (including one “f” word); both Kennedy and Oswald are shot, while the audience does not see the point blank shooting, the scenes in the hospital include a lot of blood are a somewhat gruesome; no sex but a doctor flirts briefly with a nurse; upper male nudity; no alcohol; light smoking; and, an FBI agent destroys evidence to save face.

PARKLAND is a historical drama about the immediate events surrounding John F. Kennedy’s assassination in 1963, focusing on several people affected by the situation.

Dallas resident Abraham Zapruder (Paul Giamatti) is looking forward to watching the President drive by in his motorcade like anyone else, even bringing his new 8mm camera to film the event. While he is filming, to everyone’s horror, the President is shot, and Abraham catches every frame on film.

The president is rushed to Parkland hospital where young resident Doctor, Charles Carrico (Zac Efron), has the fate of the President thrust upon him. Amid the chaos of a confused Secret Service, the doctors and nurses do everything they can to save the President, but to no avail.

Young father and husband Robert Oswald is stunned to hear that his brother, Lee Harvey Oswald, is the suspected shooter. Robert tries to cope with the fact that he has an eccentric mother and a psychotic traitor of a brother, but nonetheless, a crazy family is still family. Robert seeks to do the right thing, but everything changes when Lee is shot and is subsequently sent to the same hospital Kennedy was, where the doctors are unable to save him. Robert must live with the fact that his family name will be hated and reviled for possibly the rest of his life.

PARKLAND is engrossing and very moving at moments. The intense sequences preceding the assassination evoke a considerable amount of concern and empathy. Visceral in tone, PARKLAND succeeds at placing the viewer in the middle of the chaos. The problem is that the audience doesn’t get very close to the people experiencing the chaos. Instead, it merely surfaces the emotions and feelings of the real life characters it portrays. This is especially so with the uninspiring acting of Zac Efron, who doesn’t own his role as the Doctor trying to save the President’s life.

That said, PARKLAND has some strong moral, Christian, and patriotic elements. The Secret Service shows great respect and honor toward the President after his death, and random strangers exhibit kindness and sympathy to Jacqueline Kennedy. After Kennedy’s death at Parkland Hospital, a nurse places a crucifix on his chest and a priest prays over the body. MOVIEGUIDE® advises caution due to some strong profanities and violence.