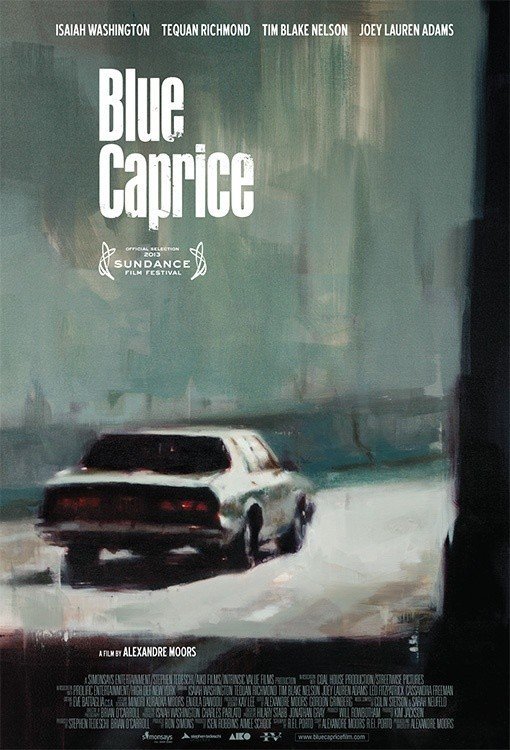 BLUE CAPRICE is based on the events of the “D.C. Sniper” case in 2002. In the Caribbean, Lee Malvo is a young teenager abandoned by his mother. With no food in the refrigerator, he begins following a man walking with children. Lee continues to follow until a man named John Mohammad takes Lee “under his wing” as his son. Eventually, John takes Lee to America. There, John satisfies his own vendetta against the American justice system by coercing and brainwashing Lee into becoming a trained sniper.

BLUE CAPRICE has good production values. Also, the leads are well cast. They bear a strong resemblance to the real-life sniper duo. In one sense, BLUE CAPRICE is a wakeup call about lost, abandoned youths. However, the movie spends much time showing John Mohammad trying to justify his personal vendetta. The movie also says nothing about the Islamist or Muslim motive behind the shootings the snipers committed. There’s no excuse for such blatant politically correct revisionist history. BLUE CAPRICE also has some graphic violence, a fair amount of foul language, and references to smoking marijuana.

(B, PaPa, PCPC, RHRH, LLL, VVV, AA, DD, MMM) Light, undeveloped moral worldview about the “Beltway Sniper” shootings in 2002, with strong pagan elements as John Mohammad indoctrinates teenager Lee Malvo to hate society, take revenge and murder, but, while killers are caught in the end, movie doesn’t mention the Muslim motives of the two killers, so there’s strong politically correct revisionist history; 26 obscenities and no profanities; moderate to heavy violence as Lee is coerced into shooting people to kill, some shot at point-blank range, shown bleeding or dead in a pool of blood, man bullies and fights teenager while treating him inhumanely at times, attempted suicide; no sex; no nudity; man drinks, and friends at cookout drink and get slightly drunk; man and teenager smoke marijuana; and, man corrupts teenager by forcing and training him to be a sniper, man allows teenager to steal and lie, stalking, robbery, mother abandons teenage son, kidnapping, and revenge.

The movie opens with real 911 calls reporting various, seemingly random shootings. Then, the movie shifts to a more quieter time and place in Antigua in the Caribbean where a teenager, Lee Malvo (played by Tequan Richmond) quietly sulks as his mom leaves home to travel away for work.

Lee spends most of his time alone. When it seems as if his mother isn’t coming back, Lee wanders off. He begins following a man walking with his three children. The man and his children go to the beach. Lee continues to follow at a distance. Lee attempts suicide by continuing to walk out into the water to drown, but he’s rescued by John (Isaiah Washington), a former military man. John takes Lee “under his wing” as his son. Eventually, John, takes Lee with him to live in America, where he eventually coerces, brainwashes and teaches Lee how to be a sniper.

John plans the locations and strategies for their next victims, intentionally not choosing targets with common traits. John’s plan is to eventually have his wife killed and the crime point to an unidentifiable sniper, not back to him. In the end, John becomes a bit too careless in his travels and rest stops, and the two are arrested. When Lee, still a minor is questioned, he only wants to know where his “father,” John, is.

BLUE CAPRICE has some good production values. There are interesting camera shots that use compelling light and shadows, especially when Lee stands alone looking into his empty refrigerator. The main characters are cast well and actually bear a strong resemblance to the real-life sniper duo. The events and main characters advance the story. On a few occasions, there’s even an element of surprise. However, the movie seems to end abruptly with a soft climax of more victims shot, and police baffled. There’s also a lack of resolution. There’s neither dialogue nor text before the final credits to inform the audience of what happened to these two characters.

In one sense, BLUE CAPRICE is a wakeup call about lost and abandoned youths like Lee. He’s a lonely youth without guidance or role models, who wants a place to belong and feel safe. Those of us who know Jesus must be a light and a positive witness or role model to show such young people that someone does love them and care, and that God wants to show them “a more excellent way” to know their gifts and true purpose (1 Cor. 12:31).

That said, the movie spends a lot of time showing John Mohammad trying to justify his vendetta against all those he feels gave him an unjust or “unfair shake.” It also shows him plotting to send a message of fear and chaos throughout Washington, D.C. and the United States. There’s no refutation of John’s attitude. Finally, the movie says nothing about the Islamist or Muslim motive behind the sniper shootings John Muhammad and Lee Malvo committed. There’s no excuse for such blatant politically correct revisionist history. So, MOVIEGUIDE® rates BLUE CAPRICE unacceptable, to protect people who might think this movie is an accurate portrayal of what actually happened. BLUE CAPRICE also contains some graphic violence and plenty of foul language, plus some marijuana references.