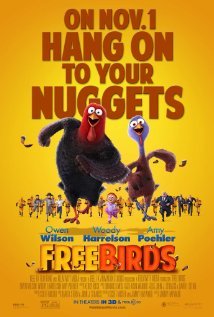 FREE BIRDS is an animated movie about two unlikely turkey heroes, Jake and Reggie, Jake and Reggie travel back in time to 1621 to stop the Pilgrims from putting turkey on their menu. Once arriving in 1621, they’re thrust in the middle of a cat and mouse hunt as they meet a flock of turkeys constantly hunted by a barbaric pilgrim hunter. Jake and Reggie hatch a plan to stop the pilgrims planned feast and possibly change turkey history.

FREE BIRDS is somewhat entertaining and has some memorable moments, but it fails at being laugh-out-loud funny, even with its talented cast. The biggest problem with FREE BIRDS is its revisionist history. Its negative portrayal of the Pilgrims, who suffered extreme hardships, is, at best, distasteful, at worst, disrespectful. That’s not to say FREE BIRDS lacks moral lessons. The turkeys exhibit several biblical virtues, including sacrifice, hard work and standing for something bigger than oneself. Thankfully, the movie is also void of foul content. FREE BIRDS’ silly story may elude any historical inaccuracy criticism, but it still merits a caution for susceptible children.

(Pa, RHRH, BB, C, E, V, M) Light mixed pagan worldview with strong revisionist history regarding the pilgrims mixed with some biblical virtues that include sacrifice, hard work, the importance of standing for something bigger than oneself, and making peace, one pilgrim also says, “Thank God,” the turkeys perform a symbolic ritual over their dead chief where some loose leaves swarm together into the air, as if his soul is ascending heaven, there’s also a reference to “the great turkey” which in the end turns out isn’t a divine being, evolution is briefly suggested; no foul language but “shut up,” “buttocks,” and “son of a gun” are said; some light slapstick animated violence, such as the pilgrims try to shoot the turkeys, and they send their dogs on them, and there’s a tense scene that includes fire; no sexual content, but a light kiss between turkeys; no nudity; no alcohol use; no smoking or drug use; and, one character acts selfishly, but learns his lesson in the end.

FREE BIRDS is an animated comedy revolving around a holiday that doesn’t always get a lot of screen time, Thanksgiving.

Owen Wilson voices Reggie, the only turkey at the farm who sees things as they really are. Everyone else is content with getting fed and fattened up. For instance, when the farmer takes one of the turkeys to the woodshed, they think the lucky turkey is going to a place called Turkey Paradise. Reggie knows the truth – that, to the humans, they’re simply food. Because of this view, the other turkeys ostracize Reggie.

One day, the President of the United States visits the farm to pardon the traditional Thanksgiving turkey. The President’s young daughter eyes Reggie and begs her dad to choose him, and he does.

After being pardoned, Reggie’s life becomes a virtual paradise. Loafing around eating pizza and watching TV, there’s no place Reggie would rather be. Until one night he’s kidnapped, or, turkeynapped. The captor reveals himself as Jake, a muscular, yet dimwitted turkey with a plan to travel back in time to the first Thanksgiving to take turkeys off the menu. According to a divine vision Jake had, he needs Reggie’s help to complete the mission. Jake drags Reggie against his will to a secret government facility. They sneak in and use an untested, experimental time travel machine.

After arriving in the early 1600s, Jake and Reggie are thrust in the middle of a cat and mouse hunt as they meet a flock of turkeys who are constantly hunted by a barbaric pilgrim hunter. Jake tries to convince the pacifist turkey chief to fight back, but all he’s focused on is the flock’s survival. Reggie also takes a liking to the chief’s daughter, Jenny. Jake and Reggie hatch a plan to stop the pilgrims planned feast and possibly change turkey history.

FREE BIRDS is somewhat entertaining and has some memorable moments, but it fails at being laugh-out-loud funny, even with its talented cast. The story has a slow beginning and could have had more heart.

One of the main issues with FREE BIRDS is regarding its revisionist view of history. Though the movie does begin with a comical disclaimer stating its fictionalized version of the actual events, it still may confuse young children. The very fact that the movie sets up the pilgrims as the villains is not only wildly outlandish, but also disrespectful. To make mockery of the men, women, and children who starved, suffered and died to build this country shows poor taste in MOVIEGUIDE®’s opinion. The movie doesn’t portray all the pilgrims as evil, only the hunters, but the rest are only shown as spineless sheep who bend to the evil hunters’ every command. Though it’s likely the filmmakers only intention was to entertain children with a admittedly clever plot, it should never be at the expense of damaging a child’s education or perception of America’s heroes.

Also, for a movie about Thanksgiving Day, FREE BIRDS fails at conveying a message of thankfulness. Instead of being thankful for what we have and for what God has provided for us and our country past and present, the children seeing this movie might demand a vegetarian replacement of the traditional turkey meal. FREE BIRDS had many opportunities to teach positive lessons of gratitude, but it never did.

That’s not to say the FREE BIRDS lacks moral lessons. In regards to each other, the turkeys in FREE BIRDS exhibit several Christian, biblical virtues. For example, Jake risks his life to save baby turkeys, and Reggie learns to stand for something bigger than himself. The movie also shows the dangers of laziness and apathy that are so prevalent in our culture. In the end [SPOILER ALERT], the turkeys and the “nicer” pilgrims learn to live together peaceably. Thankfully, other than the revisionist history, FREE BIRDS is void of foul content.